A Guide To Some of Italy’s Most Unusual Foods

There are some Italian dishes that people outside (and inside) of Italy might find a little weird. Here is a list of the most unusual culinary specialties from around the Bel Paese, which tell stories of the places from which they come.

While some of the dishes described below might make someone wince, I would encourage you all to keep in mind that these well-loved regional specialties have humble origins and show how resourceful people can be when they are extremely poor. 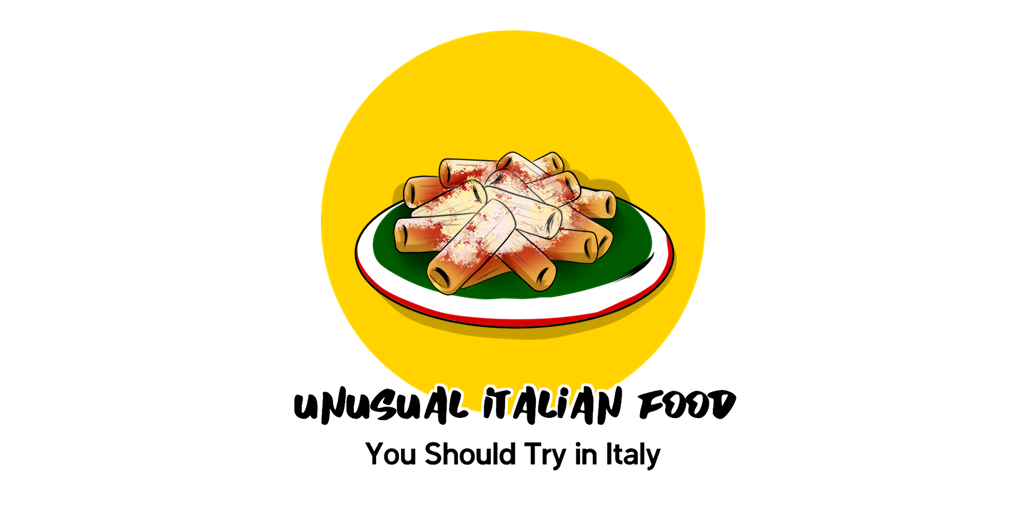 Trippa (tripes) is a cow’s stomach. It has a soft, slightly spongy texture that not everyone is fond of. Either you love it or you hate it. Trippa is a dish that needs many hours of cooking, lest it be excessively chewy.

The recipes vary by region, from Rome’s trippa alla romana, cooked in tomato sauce, to Lombardy’s busecca, served as a soup with beans and tomatoes.

Florence is fond of trippa too, where it is called lampredotto. Considered a must-try for the less-squeamish palate, it is cooked in a white sauce and served as a hot sandwich. You’ll see so many lampredotto food carts in Florence. 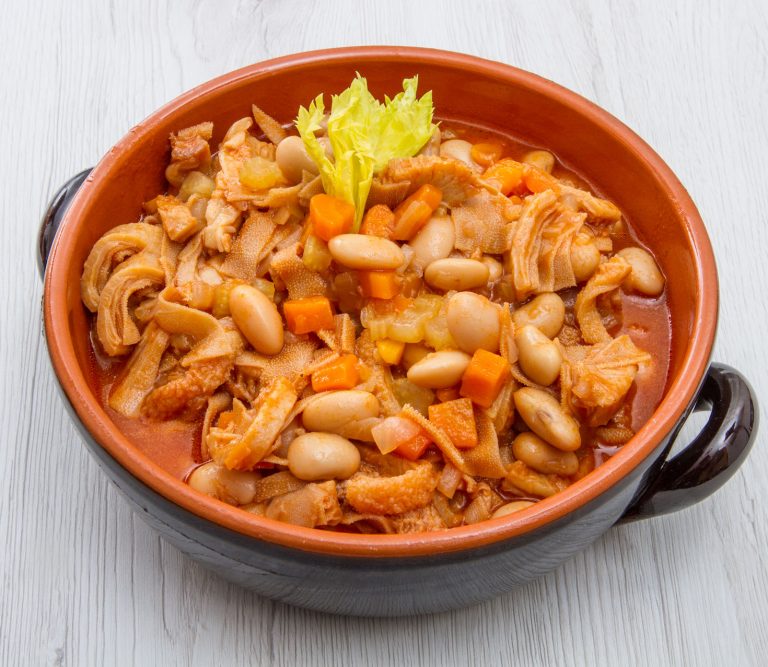 Pani câ mèusa is a typical street food of Palermo, the capital of the large, triangle-shaped island of Sicily, just off the southern coast of Italy. Its Italianized name is panino con la milza.

It consists of a soft bread locally called vastedda, flavored with sesame and stuffed with chopped veal spleen that has been boiled and then fried in lard. Ricotta cheese or rich tasting caciocavallo may also be added. 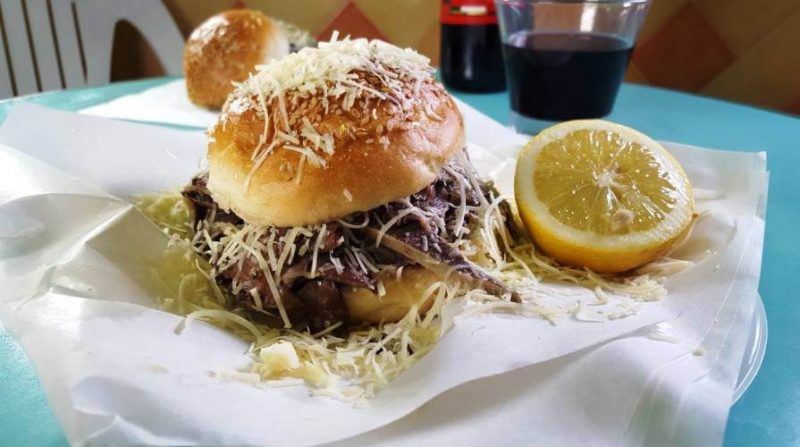 Sanguinaccio dolce is a dessert made from dark chocolate and fresh pig’s blood. It is traditionally eaten for Carnival, the Italian equivalent of Mardi Gras, across much of Italy’s Mezzogiorno, but is particularly associated with the southern region of Basilicata, the instep of the Italian boot.

The traditional recipe combines dark chocolate with pig blood to make a dense, rich and salty-sweet custard with a nice bitter aftertaste. You can eat it as-is, or, as most people prefer, dip ladyfingers, cake or cookies into the mix.

Sanguinaccio dolce is not to be confused with sanguinaccio insaccato, which is what Americans know as blood sausage. 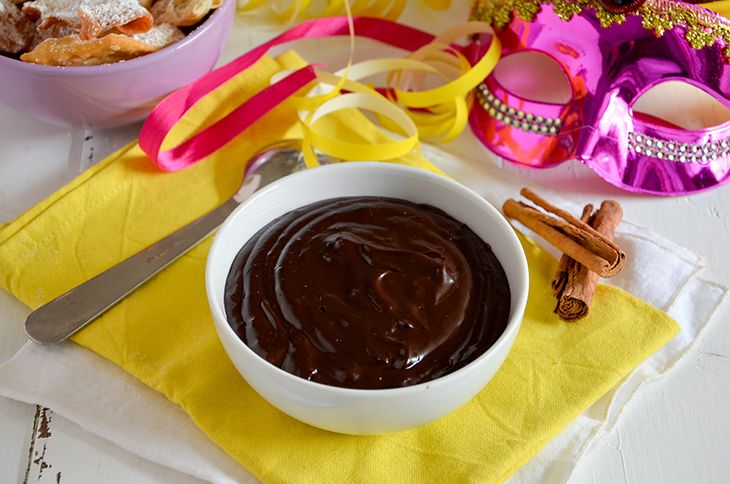 Served on its own or as a pasta sauce, pajata is made from the intestines of milk-fed calves. The milk still in the first part of the small intestine of young calves contributes to the creaminess of this classic Roman dish.

Pajata has recently made a return to Roman tables after many years on the blacklist. It had actually been banned by the European Commission for over a decade because of the mad cow disease emergency. During that time, it was replaced by lamb intestines to avoid any risk. 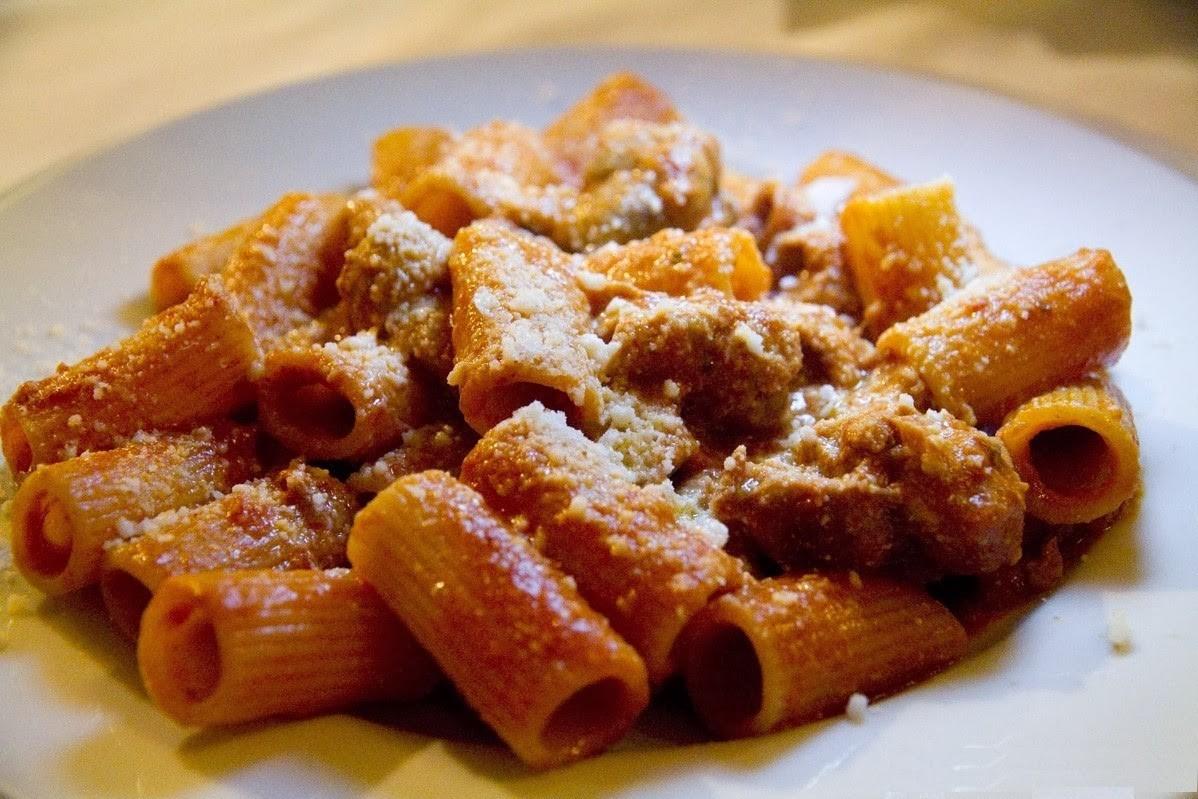 A starter of stuffed dormouse, anyone? Today these nocturnal animals are a protected species, but in ancient Rome dormice stuffed with pork mince, herbs and spices were served at banquets.

I’ve heard that this ancient Roman specialty is still widely consumed in rural areas of the southern region of Calabria, the “toe” of Italy’s boot-shaped peninsula. 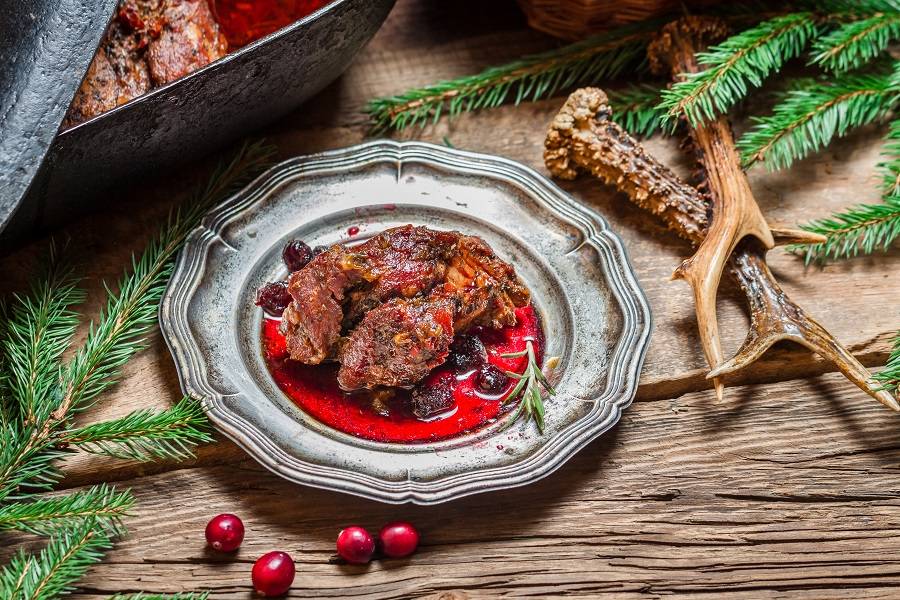 The typical New Year’s dish in Italy, zampone consists of the hollowed out skin of a pig’s trotter, filled with minced pork meat. Typically served on a bed of lentils, it is a traditional Christmas season delicacy originating from the delightful city of Modena, in northern Italy’s Emilia Romagna region.

Its origins date back to 1511, when the troops of Pope Julius II Della Rovere besieged the town of Mirandola, near Modena. Towards the end of the siege, the inhabitants of Mirandola were starving, and pigs were the only foodstuffs left. They were slaughtered, and the leaner meat was stuffed into the skin of the pig’s foreleg, so that it would be conserved and eaten at a later time. 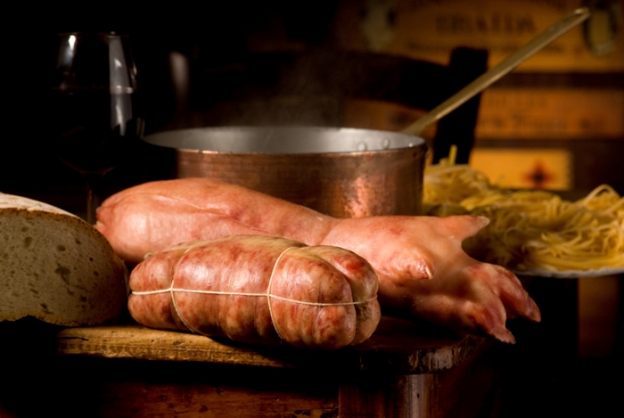 A semi-hard sheep’s milk cheese from the island of Sardinia, casu marzu is the quintessential weird Italian food. Be warned, it is not for the squeamish.

Pronounced /ca-soo mar-tsoo/, it is made of unpasteurized sheep’s milk that is encouraged to become infested with insect larvae. Also called casu cundídu, casu fràzigu and casu modde in Sardinian, casu marzu translates to rotten cheese, and contains thousands of live larvae.

In the early stages of cheese production, the cheesemakers remove the outer crust, in order to encourage flies to come and lay their eggs in it. When the eggs hatch, the maggots begin to eat their way through the cheese and leave excrement, which gives it its softness and pungent flavor.

And there’s more. Casu marzu becomes toxic when the maggots die. So – brace yourselves – it has to be eaten when the wriggly, milky white larvae are still alive. Locals cover their eyes when they eat it, as the larvae can launch themselves up to 5 inches in distance when disturbed. Ewww.

Due to the health risks of eating live maggots, the sale of this traditional Sardinian cheese has been outlawed in the EU. However, many Sardinian farmers continue to make it. 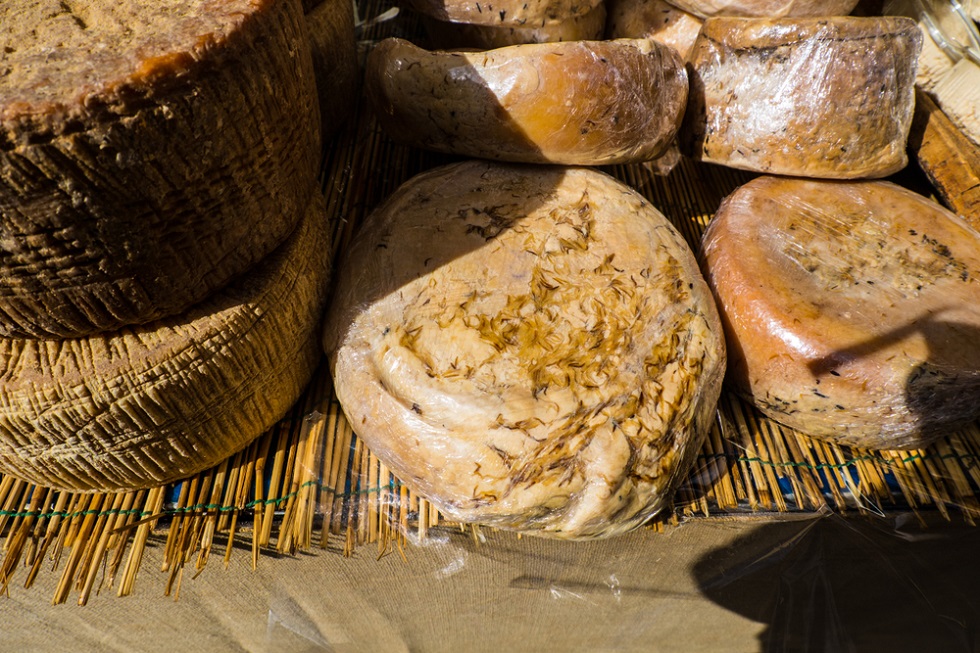 Would you eat cockscombs? Italians have been eating them since ancient times. A popular Renaissance dish in Tuscany, cibreo, pronounced /chib-ree-oh/, consists of chicken livers and cockerel’s comb and wattles, the fleshy outgrowths under the beak. It is widely used to make a sauce for pasta. Those who ate it say that cock’s combs taste like regular meat, with a gelatinous texture.

In the Piedmont region, cockscomb is a main ingredient in a hearty farmer’s stew known as finanziera, a regional specialty that also uses rooster’s wattles, veal brains and… bull testicles. Italians don’t like wasting possible food. 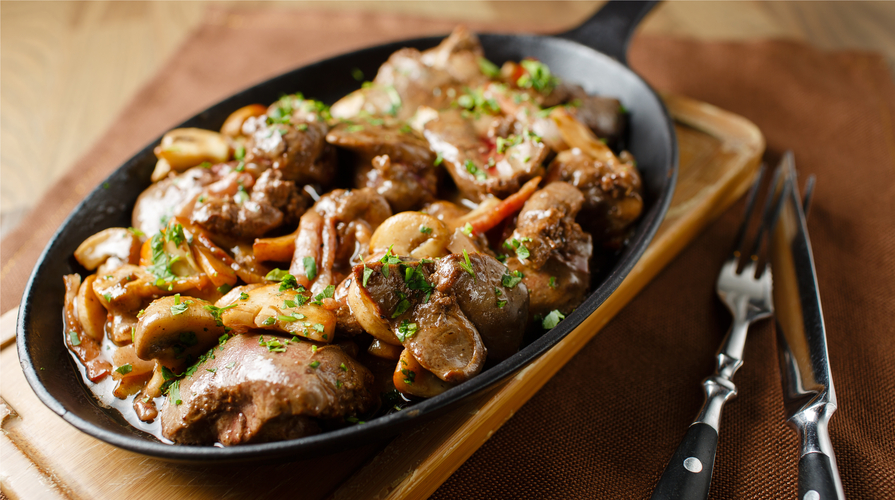 A famous Roman dish, coda alla vaccinara is an oxtail cut into sections that has stewed in wine and tomato sauce for hours, making it so tender that it falls from the tailbone by itself.

Coda alla vaccinara used to be the specialty of the rione Regola in the Eternal City, to the point that its inhabitants were nicknamed mangiacode (tail-eaters). This dense, flavorful and hearty oxtail stew is still served in many trattorias along the cobbled streets of Trastevere and Testaccio neighborhoods, in Rome. 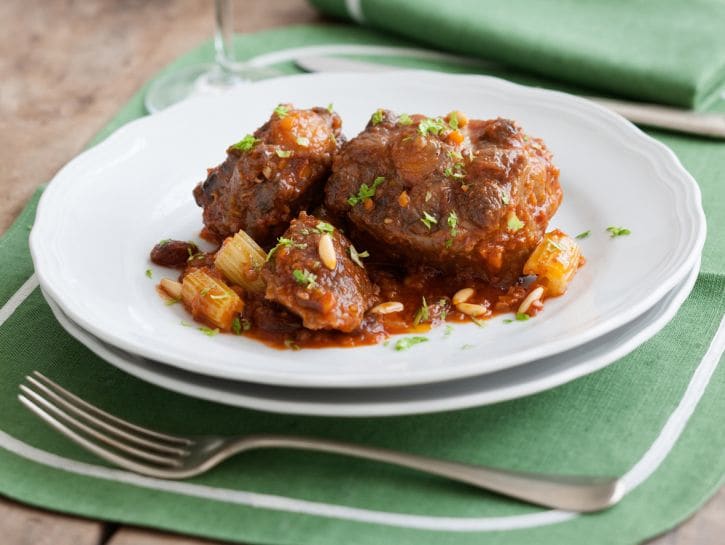 Do you remember the 1994 Dolce & Gabbana ad starring Monica Bellucci and directed by Giuseppe Tornatore? There was a dark-haired, handsome lad that vigorously pounded an octopus against the stone ridges of a tide pool to tenderize it. He then ate it right away, while looking at gorgeous Monica Bellucci changing into a bathing suit behind a translucent sheet being held up by two other ladies.

The controversial practice of eating raw fish is an ancient tradition in Italy’s center-south, and raw octopus is considered a delicious specialty. 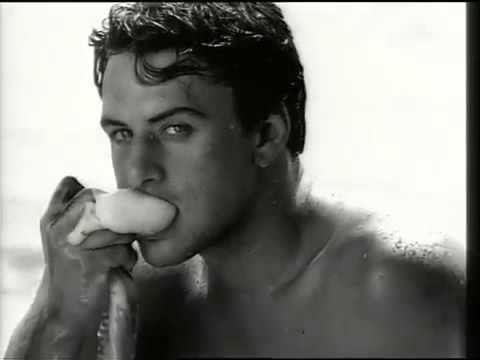 About two dozen songbirds are needed to make polenta e osèi, a sacred northern Italian dish of cornmeal mush with hunted little-bird meat, including robins, redbreasts, chaffinches, turtle doves and stone-curlews. Fans say that the smaller the bird, the more succulent and delicious the meat.

But now, hunters caught shooting and killing one of those little migratory songbirds can get smacked with a fine of up to 3000 euros. Italy has actually adopted a strict hunting regulation to protect wildlife and safeguard endangered species. 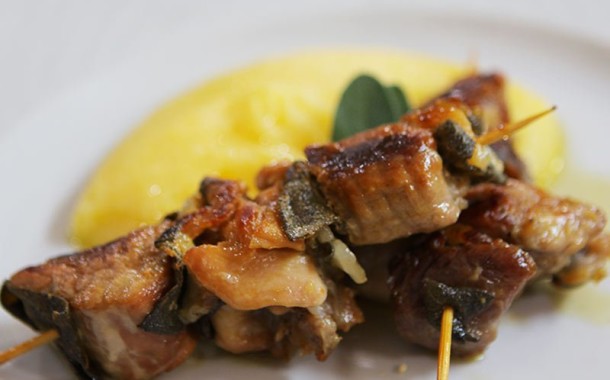 These long, lush, grass-like leaves are easy to prepare: just boil them and serve as a side dish with a generous drizzle of extra virgin olive oil and fresh lemon squeezed on top. Agretti has a slightly sharp taste, hence the name. Agro actually means sour in Italian.

Historically, this quick-growing vegetable was grown to be burnt, as its ash used to be a key ingredient in glass production. 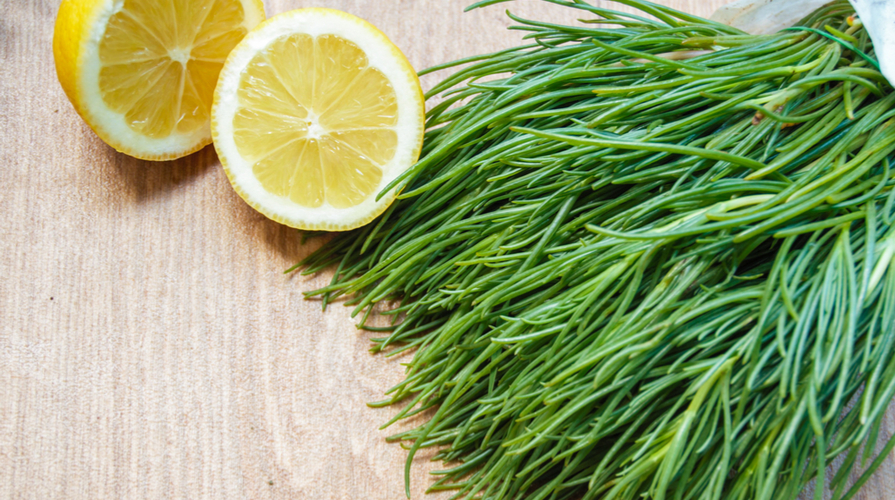 Cervelli fritti, meaning fried brains, are tastier than they sound. They are lamb, calf or veal brains that are boiled, cut into bite-sized pieces and then deep-fried. Cervelli fritti are usually served with salt, black peppercorns and a squeeze of lemon. 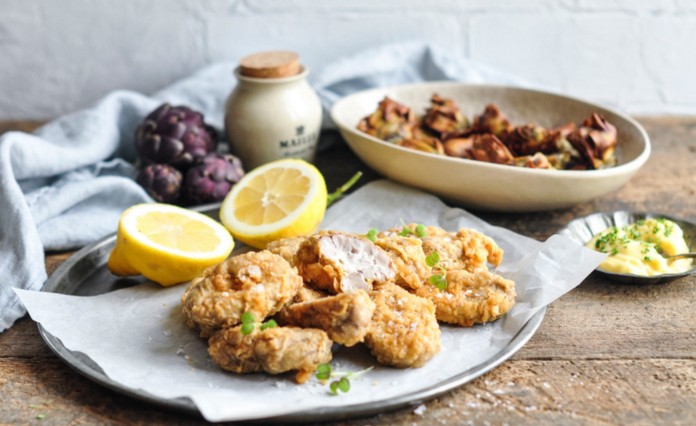 Cosce di rana are very popular in Piedmont, Veneto and Lombardy. Apparently, they taste very much like chicken. I have never had the strength to try them, I’m sorry.

They are usually battered and deep-fried. Plenty of different recipes are available out there, always involving some sort of frying. Among all frog’s species, only two are edible: the common frog (rana temporaria) and the green frog (rana esculenta). Both of them are protected under EU-law. 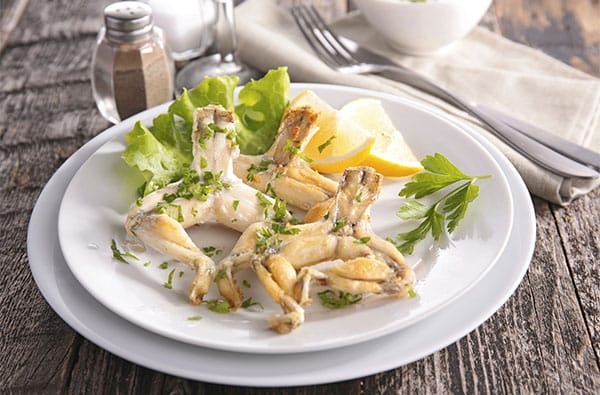 As you can see, even with less-than-ideal ingredients, Italians are able to create flavorful, nutritious meals. Which of these unconventional Italian foods would you be willing to try? Let us know in the comments.