The Christmas holiday season is a special time to take some rest and spend quality time with friends and family. Christmas in Italy is just magical.

As far as I remember, I’ve always loved the beginning of December, when the holiday vibration is perceived, with all its decorations, lights and carousels.

The Christmas season is much anticipated as one of Italy’s most celebrated holidays. Customs vary from region to region, making every part of Italy an interesting place to enjoy the Christmas holidays. Today we'll go through everything you need to know about Christmas in Italy. 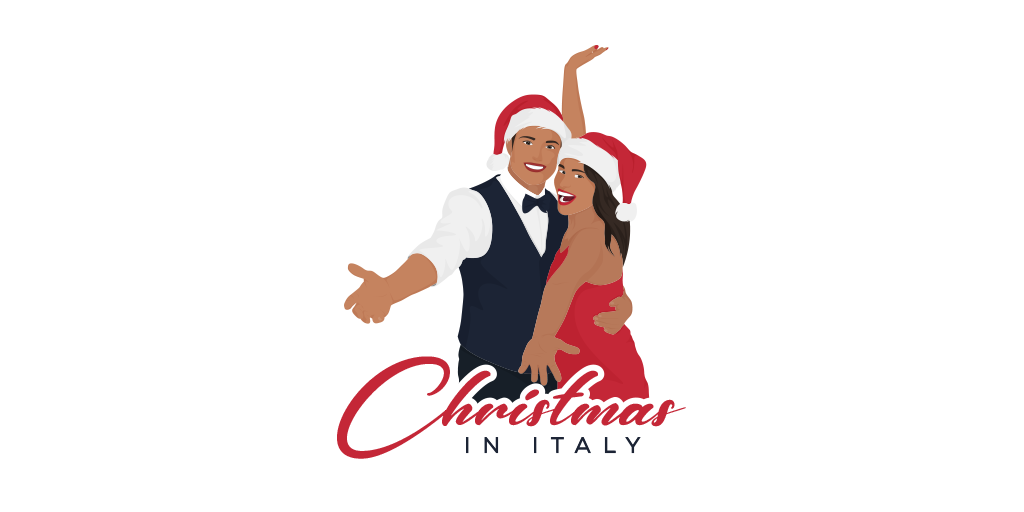 Let’s start with some vocabulary.

If you are hoping to have a truly Italian Christmas, make sure to incorporate at least some of the following traditions, which probably differ from those to which you might be accustomed.

Here are some Italian Christmas traditions you should know.

In other countries, Thanksgiving signals the start of the Christmas season. In Italy, the holiday season officially begins on December 8th, the Day of the Immaculate Conception of Mary. This is when Italians start decorating the albero di Natale (Christmas tree) and putting up Christmas decorations all around their homes, balconies and gardens.

The tradition of presepe (nativity scene) is still extremely widespread throughout Italy. Most Italian homes will have a nativity scene on display. Sometimes, contemporary characters, such as Italian footballers or politicians, are included too!

Another very popular Christmas tradition in Italy is that of the presepe vivente (living nativity scene), which is a recreation of the nativity scene with real people, held in Catholic churches throughout the country.

All over Italy, bagpipers and flute players dressed in traditional sheepskin and wool cloaks perform Christmas music in piazzas. They are called zampognari in Italian, and provide the soundtrack to a typical Italian Christmas.

Let’s face it: the biggest fans of Christmas are the kids. In Italy, Christmas presents are brought by Babbo Natale (Father Christmas) on Christmas Eve.

In Apulia, a region in Southern Italy, presents are brought by San Nicola (Saint Nicholas) on December 5th. In the northeastern region of Veneto it’s Santa Lucia (Saint Lucy) to bring presents to children, on the night of December 12th.

On Christmas Eve, most Italians go to Midnight Mass, known as Messa di mezzanotte, to celebrate their faith.

Christmas tends to be a family-centric holiday in Italy. People usually stay at home (and eat) with their loved ones. As with most Italian festivities, food is of paramount importance and plays a major role.

On Christmas Eve, the menu that makes up the cenone (big dinner) can vary massively from region to region, and usually doesn’t include meat. Abstaining from meat before Christmas is rooted in Roman Catholic tradition, and this practice is still observed in many homes, especially in southern Italy. Expect an array of fishy delights, then, from oven-roasted salmon fillets and steamed mussels in white wine to shrimp scampi with garlic.

On Christmas Day, Italians usually celebrate with a massive Christmas Lunch, with family and friends sharing multicourse meals. Meat is usually back on the menu on Christmas Day.

From typical desserts to celebratory drinks, every family has its own traditions and recipes, but there are some common traits up and down boot-shaped Italy. Here they are.

Lasagne alla bolognese are hands down one of the most delicious comfort foods that has ever existed. This superb delicacy is made with mouthwatering layers of long, flat strips of handmade pasta, béchamel sauce, grated Parmigiano Reggiano cheese and tomato-based meat sauce. 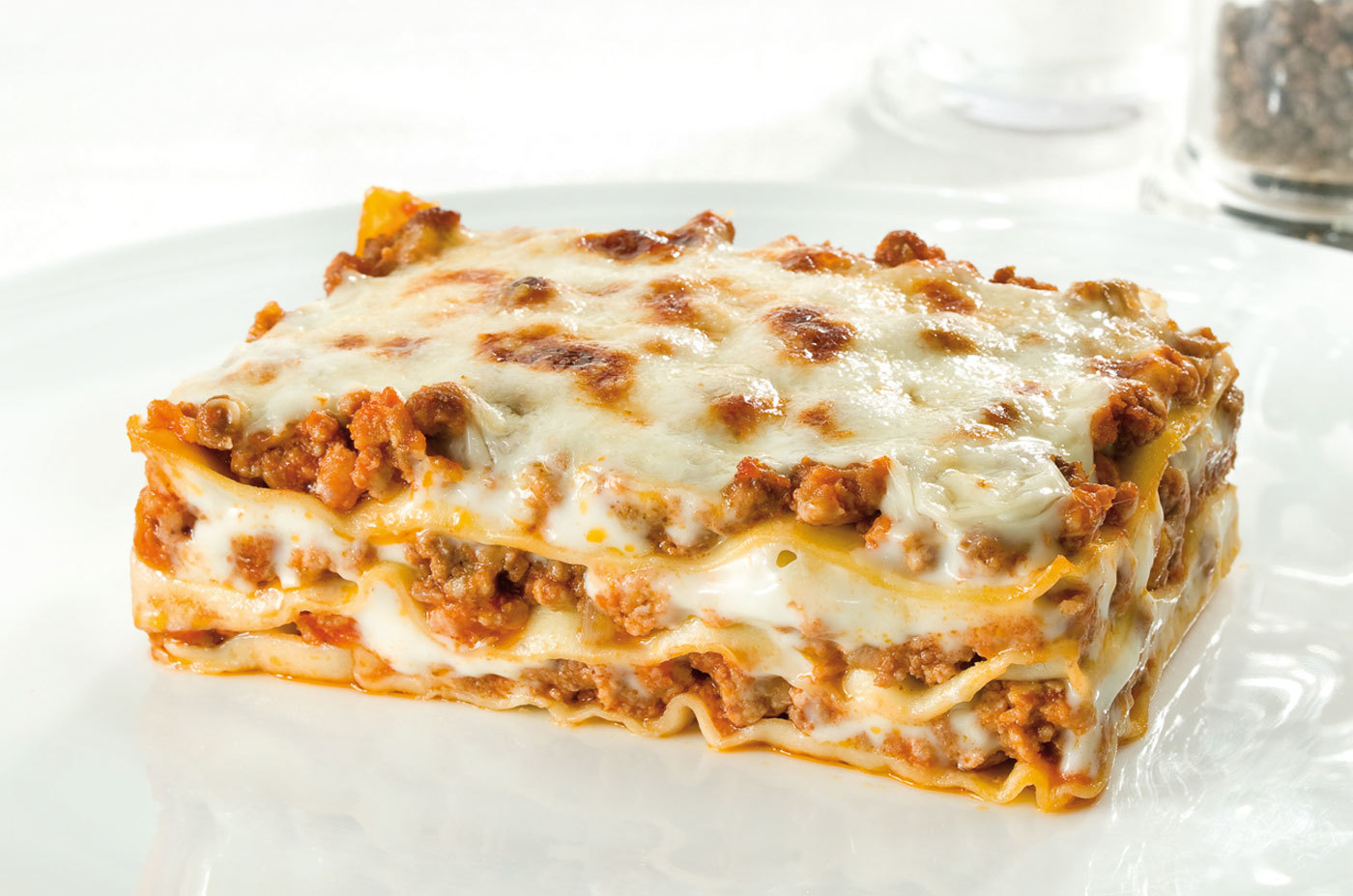 A vegetarian classic, spinach and ricotta cannelloni are an impressive yet simple pasta dish. The best version is made with homemade, fresh egg pasta stuffed with a spinach, ricotta, Parmigiano Reggiano cheese, eggs and nutmeg filling. If you don’t like spinach, kale, chard, nettles and turnip tops all work well. 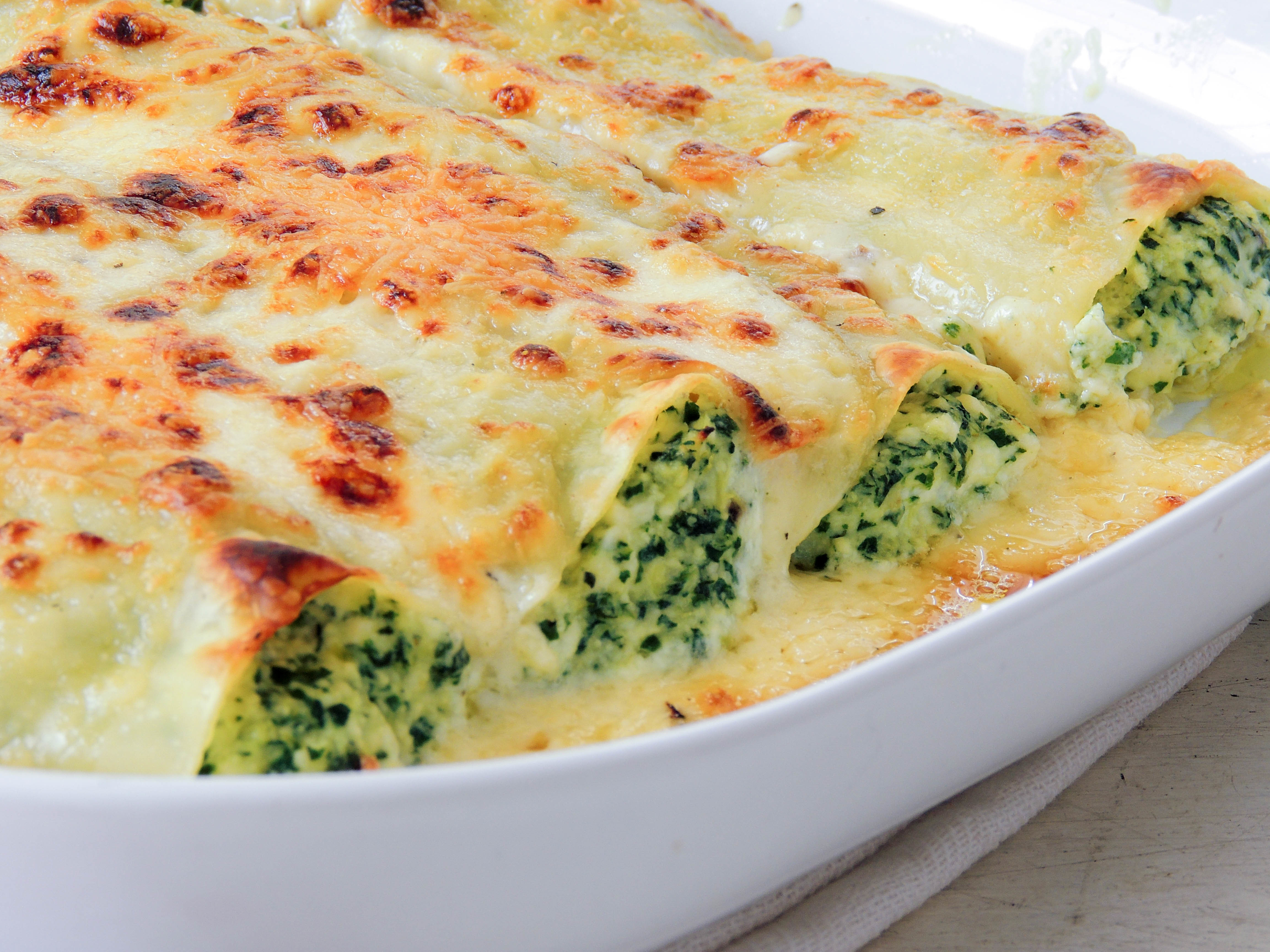 Crostini are small pieces of toasted bread topped with a variety of flavorful toppings, such as pâté, ham or salmon. They generally make an appearance on the Christmas table as an appetizer.

In Northern Italy, a delicious arrosto di tacchino ai funghi is often part of an abundant Christmas Lunch. It is a turkey breast roulade filled with Parmigiano Reggiano cheese, sautéed mushrooms and delicious slices of ham.

Traditional recipes using veal are extremely common at Christmas in Italy. A typical recipe is ossobuco alla milanese, where veal shanks are slow cooked with broth, vegetables and white wine.

When it comes to desserts, panettone, which literally translates as “big loaf”, is served all over Italy during the Christmas season. It is a large, dome-shaped cake studded with raisins and candied fruit. Panettone originally comes from the northern city of Milan, and has become a typical Christmas cake throughout Italy. 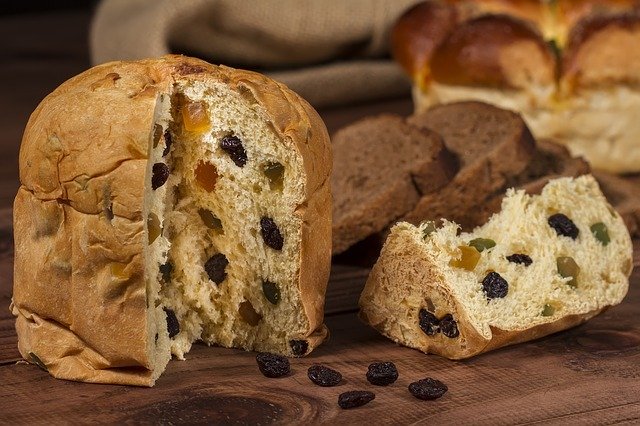 Pandoro stems from pan(e) d’oro, literally meaning “golden bread”. With a brown outer surface and a fluffy, yeast-risen golden interior, star-shaped Pandoro looks like a craggy mountain topped with snow-white powdered sugar. Unlike panettone, it doesn’t contain raisins or candied fruit, which makes it the preferred Christmas cake of many Italians, including myself. 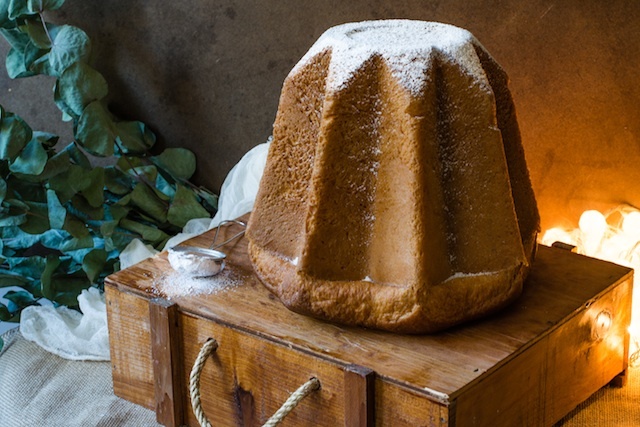 Struffoli are tiny balls of crisp-fried dough, dipped in honey and decorated with colorful candy sprinkles. They are an absolute requirement at the end of a traditional Christmas Lunch in Naples. 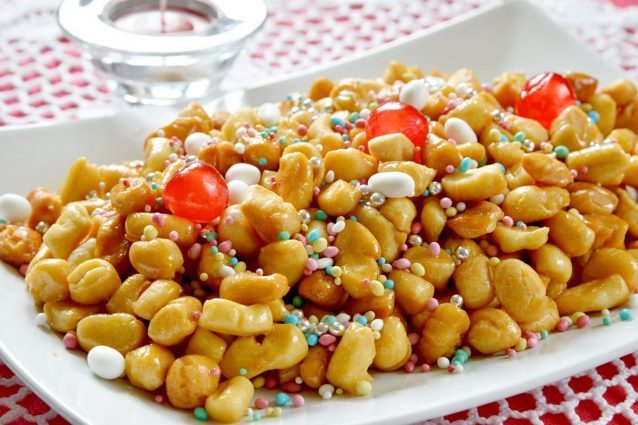 Torrone is a kind of nougat made of honey, sugar, almonds or hazelnuts. Its name literally translates as “big tower”. The recipe varies depending on whether you are in the south or north of the country. 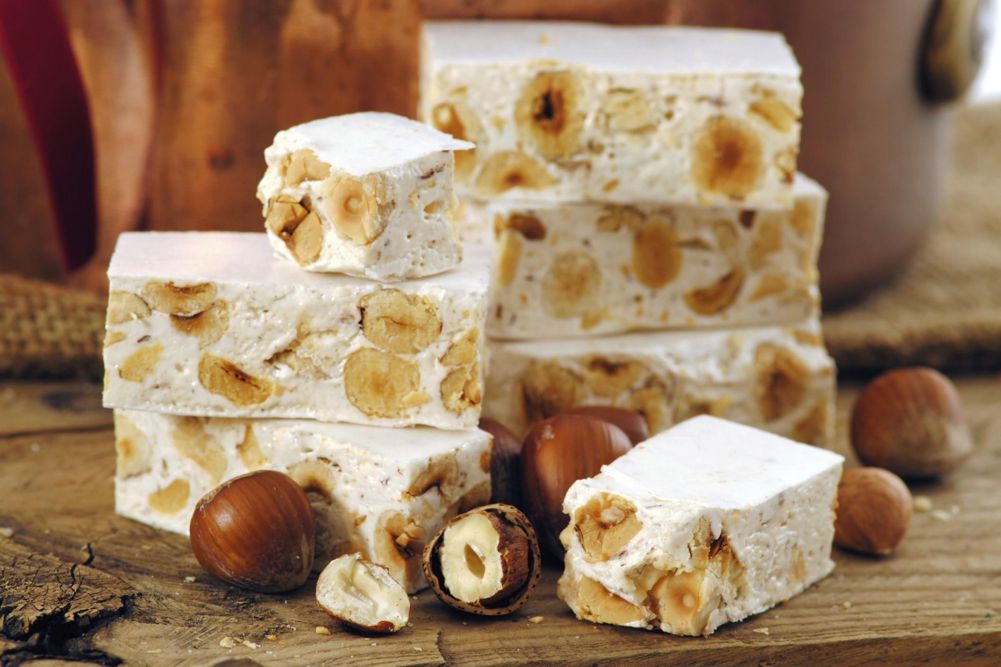 Vin brûlé is the traditional, spiced mulled wine beverage that is served all over Italy at Christmas. It pairs the warming, aromatic spices of ginger, cinnamon, cloves, nutmeg, vanilla and black peppercorns with red wine. Vin brûlé is a wonderful way to warm guests’ stomachs.

While English speakers refer to December 31st as New Year’s Eve, in Italy the occasion goes by other names:

Here is how to ask about someone’s New Year’s Eve plans:

Cosa fai a Capodanno?/ Cosa fai per San Silvestro? – What are you doing for New Year’s Eve?

If you want to wish someone all the best, simply say:

Most Italians continue to hold on to traditional customs and rituals, which promise to bring good fortune and banish bad luck in the coming year. Let’s have a look.

Most festivities in Italy seem to naturally revolve around food, and San Silvestro is no exception. Italians usually celebrate Capodanno with a cenone with friends and family. Tradition dictates the menu for a lucky New Year’s dinner. The delicacies served during the cenone are symbolic of good wishes for the new year.

Lentils (lenticchie) star in most New Year’s Eve feasts throughout Italy. With their golden brown color and round, flat shape, lentils resemble gold coins and are traditionally believed to bring wealth and financial prosperity in the coming year.

The more lentils you eat, the better off you’ll be financially in the coming year! They are usually cooked with herbs, tomatoes and extra-virgin olive oil. 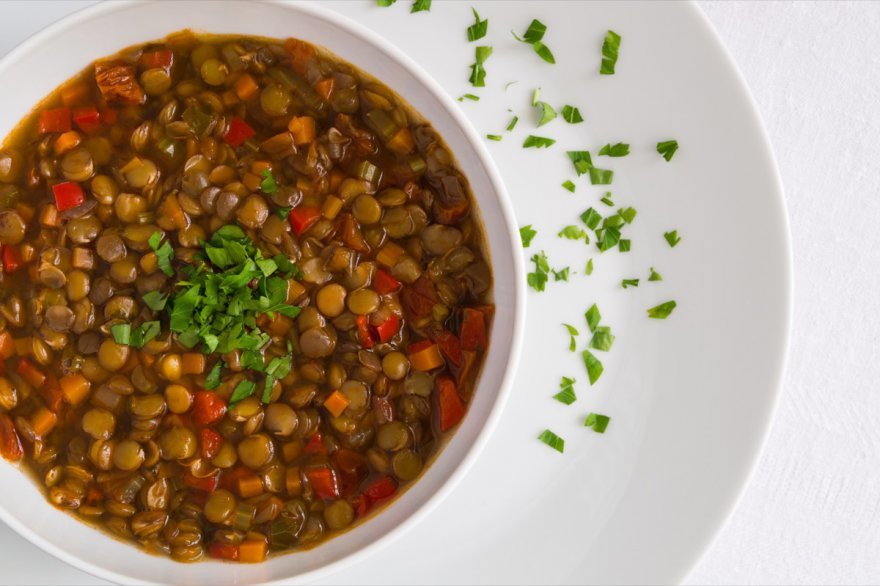 Pork symbolizes the bountifulness and richness of life in the coming year. Cotechino, a delicious, savory, large pork sausage from Modena, in the Emilia Romagna region, is the classic accompaniment for lenticchie all over Italy. It is sliced into rounds before being served with puré (mashed potatoes). 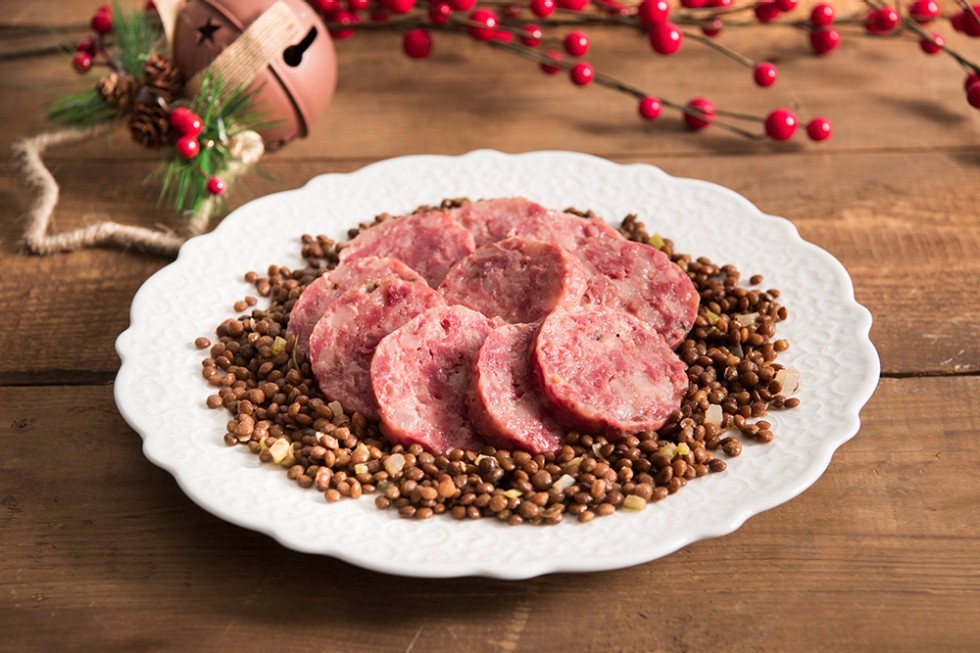 Traditionally believed to bring wealth and abundance, zampone, literally meaning “big paw”, is the hollowed out skin of a pig’s trotter, filled with a pork sausage. Just like cotechino, it is boiled and sliced into rounds before serving. Most Italian supermarkets start selling pre-packed zampone in November. 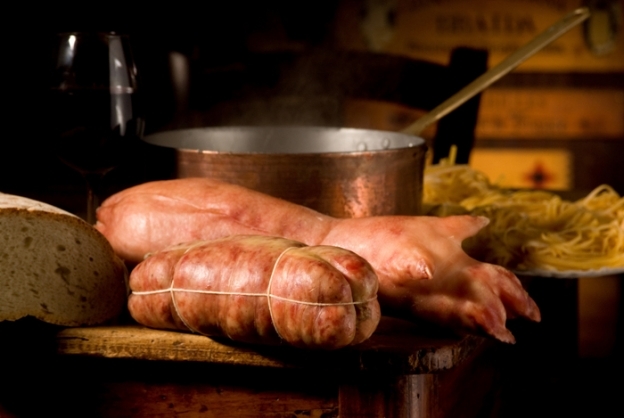 In the Emilia Romagna region, cappelletti (literally meaning “little hats”) are traditionally eaten on New Year’s Eve in a meaty broth. Pasta is made from scratch. It is hand rolled, filled with a mix of beef, pork and chicken, Parmigiano Reggiano cheese and nutmeg, and shaped into little hats. 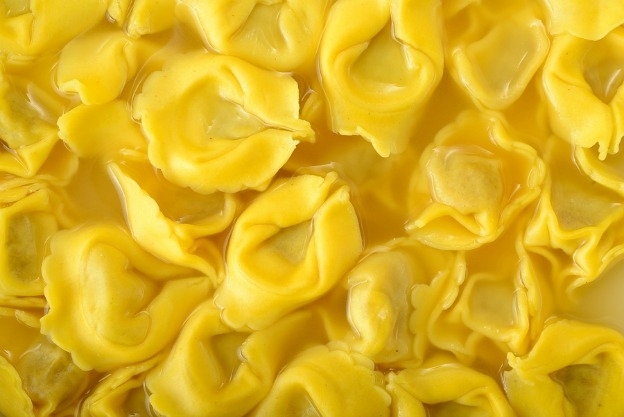 As for the dessert, it usually is one of the famous Christmas cakes, Panettone or Pandoro dusted with powdered sugar. Panettone and Pandoro are usually accompanied by mascarpone cream and Prosecco, Italy’s most popular sparkling wine.

Superstition has it that eating one grape for each strike of the clock at midnight on New Year’s Eve will bring you good luck. And there’s more. It also ensures you will be prudent with your new-found wealth.

In northern Italy, we believe good health comes from eating grapes in the morning of New Year’s Day.

As mentioned previously, there are a number of superstitions and rituals surrounding New Year’s Eve in Italy. Here they are.

Giving and wearing red underwear to ring in luck

Italian folklore claims that wearing red underwear brings luck, good fortune and fertility in the coming year. This goes for both men and women. To work properly, red undergarments should be new and a gift from someone else, and have to be thrown away the day after.

In Italy, the end of one year and beginning of another is celebrated with a lot of noise to frighten away evil spirits. Fireworks are everywhere on New Year’s Eve, where every city and most large towns have public fireworks in a central square. The celebratory explosions light up the sky after the clock strikes 12.

Pop the spumante to ring in the New Year

The New Year is celebrated with Italian sparkling wine spumante or Prosecco. When the clock strikes midnight, you are supposed to have a glass of spumante in hand to toast with your loved ones.

No greetings before midnight!

In Italy, people tend to be very superstitious and don’t want to hear “Happy New Year” before midnight. If you do, expect to see them doing strange hand gestures, like devil horns.

Out with the old and in with the new

In sun-kissed Italy, out with the old can be taken literally when Capodanno rolls around. Especially in southern Italy, it is traditional to throw things you no longer want out the window at midnight to fend off negativity and evil spirits.

Throwing old plates and clothes out of the window is seen to symbolize letting go of unhappiness in preparation for the new year. So, watch out for falling objects if you are walking around near midnight…

Similarly, in northern Italy it is customary to show that you are ready for a new start by smashing glasses, dishes, vases and other pottery at your front door.

The feast of the Epiphany

The celebrations continue all the way through to January 6th, the feast of the Epiphany, marked in the Italian calendar as the holiday season’s grand finale. It commemorates the coming of the Magi, also referred to as the Three Wise Men, in Bethlehem to visit baby Jesus.

There is also a uniquely Italian tradition that has grown out of ancient pagan rituals. Similar to the holiday figure of Santa Claus, the Befana is a broom-riding, kind, old witch, who delivers toys and sweets to the well-behaved children and coal to the naughty ones. They are dispensed overnight, according to Italian folklore.

As you can see, you won’t be bored during the holiday season in Italy. Buon Natale e Felice Anno Nuovo!