Words of Wisdom: 35 Italian Proverbs to Live By

The poetic Italian language is loaded with proverbs, sayings and colorful ways to express a point. There is an Italian proverb for any situation.

Whether they originated centuries ago or only recently, proverbs reflect our culture and history. They are a beautiful part of the language and help you understand the Italian culture on a deeper level.

While some have an English equivalent, others are more unique and, at times, downright bizarre. Here we have listed 35 common Italian pearls of wisdom that will add swagger to your language skills. 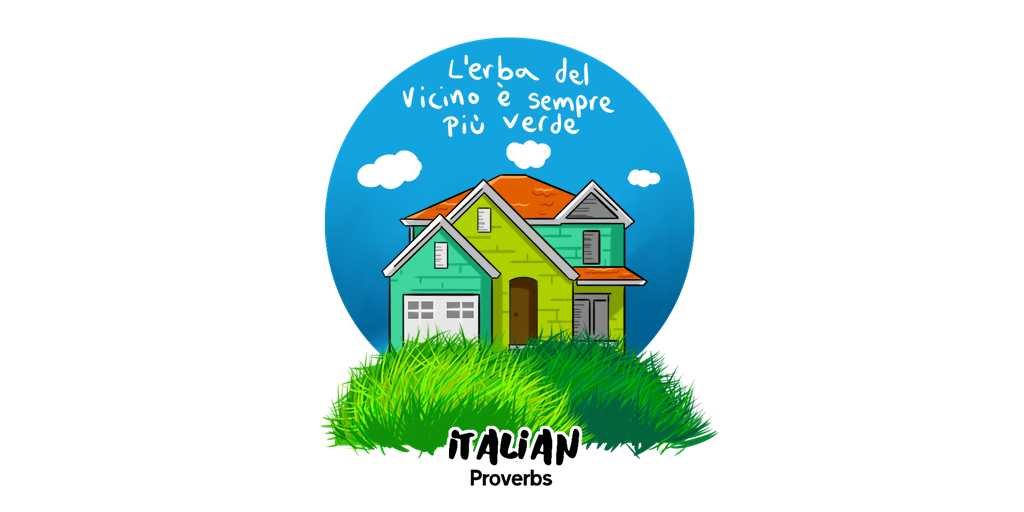 Literal translation: Between saying and doing there’s the sea.

English equivalent: There’s many a slip ‘twixt the cup and the lip.

The proverb “Tra il dire e il fare c’è di mezzo il mare” implies that, even when a good outcome seems certain, there is plenty of room for things to go wrong.

Literal translation: Better one day as a lion than a hundred as a sheep.

This is an inspirational Italian proverb, which doesn’t have an English counterpart. It means that it is better to be a brave, fearless leader just for one day than a coward follower for your whole life.

This Italian proverb means that extreme and undesirable situations can only be resolved with equally extreme actions. In other words, drastic action is called for and justified when you find yourself in an exceptionally difficult situation.

In this case there is a direct correspondence with the English proverb “It’s no use crying over spilt milk”.

This saying is used to emphasize that it is not useful feeling sorry about something that has already happened and can’t be changed.

Literal translation: Better an egg today than a hen tomorrow.

English equivalent: A bird in the hand is worth two in the bush.

The Italian proverb “Meglio un uovo oggi che una gallina domani” means that it is better to have the immediate certainty of a small benefit than the prospect of something bigger and better, which might come to nothing.

Literal translation: The cowl does not make the monk.

English equivalents: “Clothes don’t make the man” and “Don’t judge a book by its cover”.

This proverb means that you shouldn’t judge someone based on their appearance or clothing.

Literal translation: He who has caused his own pain, cries to himself.

English equivalent: You have no one to blame but yourself.

This proverb means that you have to be responsible for the unpleasant consequences of your own actions and decisions.

Literal translation: Not all bad things come to hurt.

English equivalent: Every cloud has a silver lining.

This is a very common Italian proverb meaning that there is something positive in every bad thing that might happen to you. For example, the loss of a job can be devastating, but can lead to new and better opportunities.

My grandma used to say this to me all the time when I was little. It means that if you lose something in your house, it’s never really lost and you should go on looking for it.

Literal translation: Don’t say cat if you don’t have it in the bag.

The closest expression in English is “Don’t count your chickens before they hatch”.

This proverb invites you to be prudent. You shouldn’t make plans based on something happening before it has actually happened.

This proverb means that doing something too quickly can result in a less-than-perfect outcome. In other words, things done in haste tend to turn out badly.

English equivalent: The grass is always greener on the other side of the fence.

We use this proverb to say that other people’s lives always seem better or easier than our own, even when that’s not actually the case. It comes from the idea of looking at your neighbor’s lawn and seeing it as better looking than your own, when you are actually just ignoring anything negative about it and, at the same time, downplaying everything positive about your own.

Literally: Who has no head, should have good legs.

An English equivalent might be “A forgetful head makes a weary pair of heels”.

This saying means that if you generally forget things, you will need strong legs as you will have to walk more to go back and get them. I think of this proverb every time I get halfway across the car park and have to go back to check if I locked my car.

English equivalent: You’ve made your bed, now lie on it.

This proverb refers to a situation where you are striving for something and, once obtained, you find yourself dealing with all it entails. If someone says “Hai voluto la bicicletta? Adesso pedala”, they are telling you that you have to accept the challenging consequences of what you have obtained, and deal with them.

This saying literally translates to: The cat goes to the lard so often that she leaves her paw print.

It means that long-continued impunity ends at length in punishment. In other words, if you keep on doing the same (bad) thing over and over again, sooner or later you will get caught.

“The pitcher goes so often to the well that it leaves its handle” is probably the closest translation for this one.

This is probably the most popular Neapolitan saying. In standard Italian it is:

“(He has) a face only a mother could love” is the closest expression for this one I can think of.

This hearty proverb implies that, no matter how many flaws he has, a child is always perfect in his mother’s eyes. This wholehearted saying became famous all over Italy when the popular Neapolitan singer-songwriter Pino Daniele dedicated his famous song ‘O scarrafone to it in 1991.

English equivalent: Better be alone than in bad company.

This proverb means that it is much better to enjoy your own company than to waste time with people who care nothing about you, or just want to use you when it is convenient.

English equivalents: “You snooze, you lose”, and “The early bird catches the worm”.

This proverb teaches that if you waste time and don’t pay attention, you will not accomplish anything and someone else will do it instead of you.

This saying literally translates to: Give them a finger and they’ll take an arm.

English equivalent: Give him an inch and he’ll take a mile.

This proverb is used to describe someone who has been given something and then, instead of being content with it, tries to get a whole lot more.

This is what short women say all the time in order to try and convince themselves and others that they are more attractive than taller ones.

English equivalent: A friend in need is a friend indeed.

A friend who helps you at a difficult time is a person you can really rely on. Conversely, someone who doesn’t lift a finger to help you when you need help does not deserve your friendship.

English equivalent: Don’t look a gift horse in the mouth.

The Italian proverb “A caval donato non si guarda in bocca” means that, when you receive a gift or handout – whatever their value – you should be grateful and shouldn’t unappreciatively question them too closely.

This proverb refers to the practice of evaluating the age of a horse by inspecting its teeth, because horses’ teeth change over time. Doing such a check would be a sign of mistrust towards the giver.

Literally: Either eat this soup or jump out the window.

An English equivalent might be “Take it or leave it”.

This saying means that there are no other options. You either accept what you are offered without any change or refuse it.

This proverb corresponds pretty neatly to the English saying “He who laughs last laughs longest”.

It is said to emphasize that those who have control of a situation are most successful in the end, even if you had seemed originally to have an advantage. Don’t rejoice too soon, then. Your delight at your own good fortune may be premature.

Bacchus is the Roman god of wine, while Venus symbolizes women in this tongue-in-cheek proverb. Its meaning is self-explanatory: alcohol, cigarette smoking and women are a man’s downfall.

Literal translation: Who does it, should await it.

English equivalent: What goes around, comes around.

This is a very common proverb and means that if you treat other people badly, you will eventually be treated badly by someone else. The consequences of your bad actions will have to be dealt with sooner or later.

Literally: The ambassador brings no pain.

We use this proverb to warn someone not to be angry with the person who tells them something bad. In other words, somebody carrying news shouldn’t be blamed if the news is not good.

Literally: He who goes slowly goes safely and goes far.

The origin of this nice proverb is from one of Aesop’s Fables, “The Tortoise and the Hare”. It means that you will have more success if you take your time and use your brain rather than rushing ahead to meet your goal.

This common proverb means that anyone, even those who are morally upright, would steal if they had the chance to do it without getting caught and without being punished.

Literally: He who starts well is halfway done.

English equivalents: “Well begun is half done” and “A good start is half the battle”.

Most of the time, if you do the proper preparations before starting a task, it will make it easier to do the rest. In other words, a good beginning almost assures success.

Literal translation: The wolf loses the hair but not the vice.

The proverbial saying “Il lupo perde il pelo ma non il vizio” expresses the notion that if somebody has a bad habit, he will not give it up easily.

Literally: Not all doughnuts come out with a hole.

We use it to indicate that, despite all efforts, things don’t always turn out as planned.

Literal translation: Making an elephant out of a fly.

English equivalent: Making a mountain out of a molehill.

“Fare di una mosca un elefante” means to greatly exaggerate the importance of a problem. We use it when we want to tell someone not to make a big deal out of something not so terrible.

Literal translation: You wash your dirty clothes in family.

English equivalent: You don’t air your dirty laundry in public.

“I panni sporchi si lavano in famiglia” means that your private issues shouldn’t be made gratuitously public. In other words, you shouldn’t talk about your personal or family problems amongst others that are not involved. It originates from the fact that dirty laundry should be kept out of sight when people are visiting, otherwise it could be embarrassing for both you and them.

This saying literally translates to: The mother of fools is always pregnant.

It is the same idea behind the English expression “There’s one born every minute”. It is usually trotted out sarcastically to show disapproval when somebody does a very stupid thing.

Part of our everyday life, Italian proverbs can be very hilarious. Which one is your favorite so far? Share it in the comments section!