How to Talk About the Future in Italian: A Guide to the Futuro Anteriore

It is nothing to fear, though, and its rules are pretty straightforward. In this lesson, we will show you how to form, use and understand the futuro anteriore. Let’s get started! 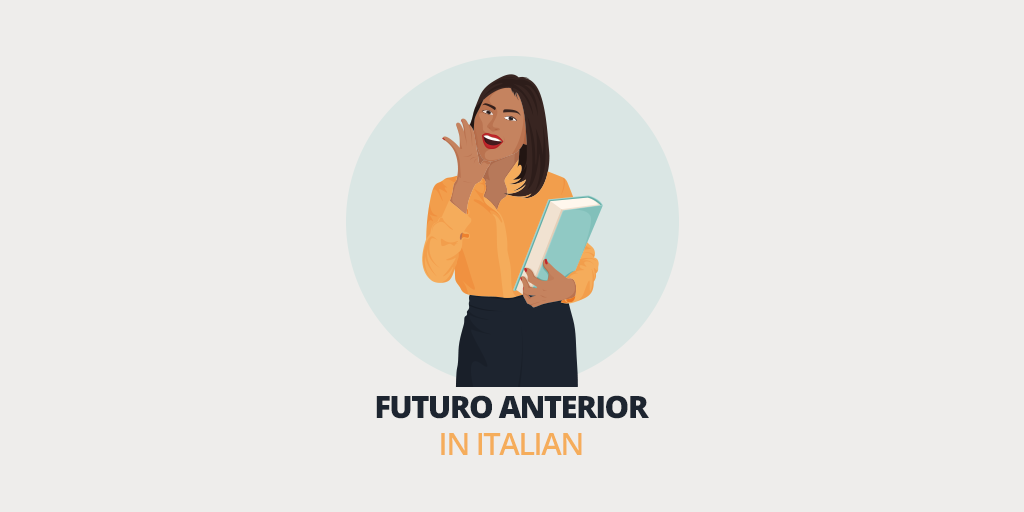 How to use the futuro anteriore

In standard Italian, the futuro anteriore, also called futuro composto, refers to an action which will have already finished before another action occurs in the future.

Dopo che avrai finito i compiti, potrai andare a giocare al parco – After you will have finished your homework, you can go play in the park

The above describes a future action (going playing in the park) occurring after an earlier future action has been completed (finishing the homework).

Here is another example:

Appena avrò guardato questo DVD, te lo presterò volentieri – As soon as I have watched this DVD, I will gladly lend it to you

As you can see, the Italian futuro anteriore refers to an action which will be over before another future event (generally introduced by the futuro semplice) takes place.

The futuro anteriore is also used in ways that might appear a bit stranger to native English-speaking learners. It can be used to:

Le luci sono accese, Rebecca si sarà dimenticata di spegnerle – The lights are on, Rebecca must have forgotten to turn them off

As you might have noticed, in this case the futuro anteriore corresponds to “must have” in English.

The Italian future perfect tense is also to be used to talk about what will have happened by a point in time in the future.

How to construct the futuro anteriore

As you saw above, the futuro anteriore is a compound tense, which means that it requires an auxiliary verb.

As with the passato prossimo and trapassato prossimo, you will use the past participle of the verb describing the action preceded by avere (to have) and essere (to be), but this time those auxiliary verbs will be in the future simple tense.

The conjugations of the auxiliary verbs “avere” and “essere” are as follow:

To make the past participle of regular verbs you just have to remove the infinitive ending -are, -ere or -ire and add the correct ending. Just follow this simple rule:

Choose the same auxiliary verb as you would for the passato prossimo and trapassato prossimo, depending on the verb expressing the meaning of the sentence.

Most transitive verbs, like mangiare (to eat), usare (to use), provocare (to provoke), vedere (to look) and dire (to say), take “avere” as their auxiliary verb.

Alessio ti avrà anche provocato, ma non ci sono scusanti per come ti sei comportato – Alessio may have provoked you, but there are no excuses for how you have behaved

Remember that, though intransitive, dormire (to sleep), rispondere (to answer), viaggiare (to travel) and vivere (to live) will be paired with the auxiliary verb avere.

You have to use the auxiliary verb “essere” with:

Some of the verbs that take “essere” as their auxiliary verb are:

As with the passato prossimo and trapassato prossimo, when you use the auxiliary verb “essere,” the past participle must agree with the subject in gender (masculine or feminine) and number (singular or plural).

Which phrases are typically used with the futuro anteriore?

Here is a list of marker words that are usually used with the futuro anteriore in Italian:

Quando avrai compiuto 18 anni, avrai il diritto al voto – When you will have turned 18, you will be eligible to vote

Dopo che avrò finito gli studi, mi trasferirò negli Stati Uniti – When I will have finished my studies, I will move to the United States

Chissà quanto vi sarete divertiti a Las Vegas! – You must have had so much fun in Las Vegas!

How do futuro anteriore and futuro semplice work together?

As mentioned previously, the Italian future perfect tense and the simple future tense are often used together in the same sentence.

In this type of construction, the future event expressed by the futuro anteriore is going to happen before the action you are referring to with the futuro semplice.

Quando avrai finito il risotto, ti porterò il dolce – When you will have finished your risotto, I will give you dessert

Non appena avrò finito di fare le pulizie, verrò a trovarti – As soon as I will have finished cleaning, I will come and see you

As you can see, the futuro anteriore describes a future event that is in the past from the perspective of a later future event. In other words, it is a “past future event.”

The futuro anteriore in spoken Italian

Most native Italian speakers tend to use other workarounds to avoid using the futuro anteriore, especially in casual, informal conversation.

Dopo che avrà finito la scuola, Melania andrà a vivere a Dublino – When Melania will have finished high school, she will move to Dublin

Practice as much as you can until you get the hang of it. Practice makes perfect!