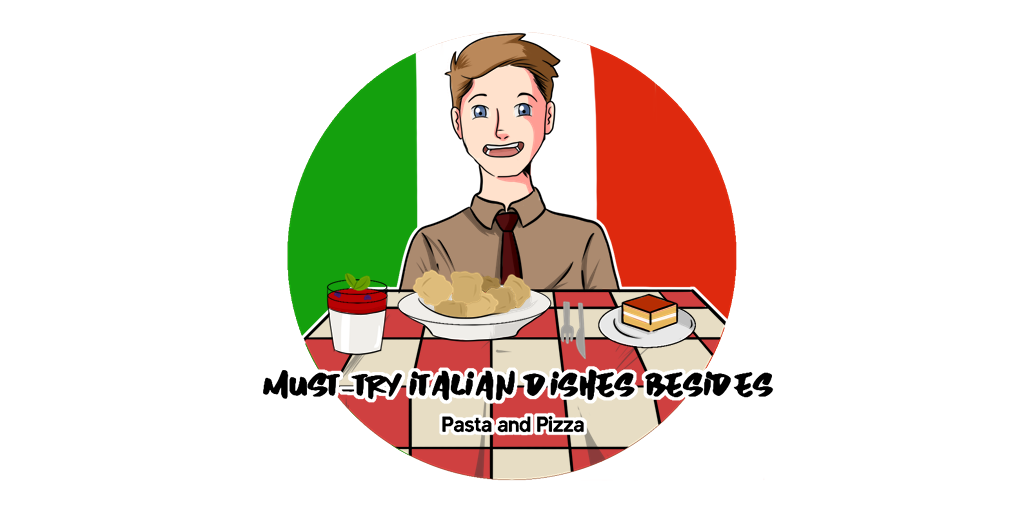 Synonymous with good food, sun-kissed Italy is a sweet spot that deserves to be on every foodie’s bucket list.

While you should definitely indulge in classic Italian dishes like pasta and Neapolitan pizza during your stay in the Belpaese, it would be an absolute crime to limit yourself to them. Broaden your horizons, and sample some Italian delicacies that are not so common.

Here is our guide to the best local dishes in Italy.

15 delicious foods to eat in Italy

Few countries in the world can boast such a richness of culinary history as the Belpaese. When you travel around sunny Italy, you will quickly notice that every region has its own distinct cuisine and a culinary signature which locals consider the best in the whole country.

Every Italian region has its own typical dish waiting for you to (literally) sink your teeth into. Venture beyond pasta and pizza then, and taste these mouth-watering delicacies.

The pride of Sicily, arancini di riso, also known as arancine, are one of the most popular Italian street foods. Arancino literally means small orange, but this crisp delicacy has actually nothing to do with oranges and citrus fruits. A crunchy and golden Sicilian arancino is a deep fried ball of rice stuffed with cheese and peas, and enriched with meat sauce and tomatoes.

The rice is slow cooked in vegetable broth with the addition of saffron, hence the rice being bright yellow. Then you add peas and cheese, and prepare the meat sauce. These big rice balls are then covered in bread crumbs, deep-fried and served in a rich meat sauce. Even if there is a standard recipe, you can find endless varieties of Sicilian arancini in Italy, with mushrooms, pumpkin, eggplant, spinach and even tuna and swordfish.

The Bistecca alla Fiorentina (literally, Florentine steak) is the signature dish of Florence, Tuscany. This huge steak is cut from Chianina cows, bred in Val di Chiana, south of Florence.

A perfect Fiorentina must be at least two fingers thick, have its bone attached and weigh between 900 and 1250 grams. It should be kept for a couple of days in a cool place, then rest at room temperature for a few hours before being grilled without being marinated nor dressed.

Ideally, this thick-cut steak should be cooked on a wooden grill, for three to five minutes on each side. It’s cooked rare. Don’t request it well-done, as you will be told this is impossible. A good Fiorentina is usually served with roasted potatoes, grilled vegetables or cannellini beans dressed in Tuscan extra virgin olive oil. Florentines are extremely proud of this superb delicacy. 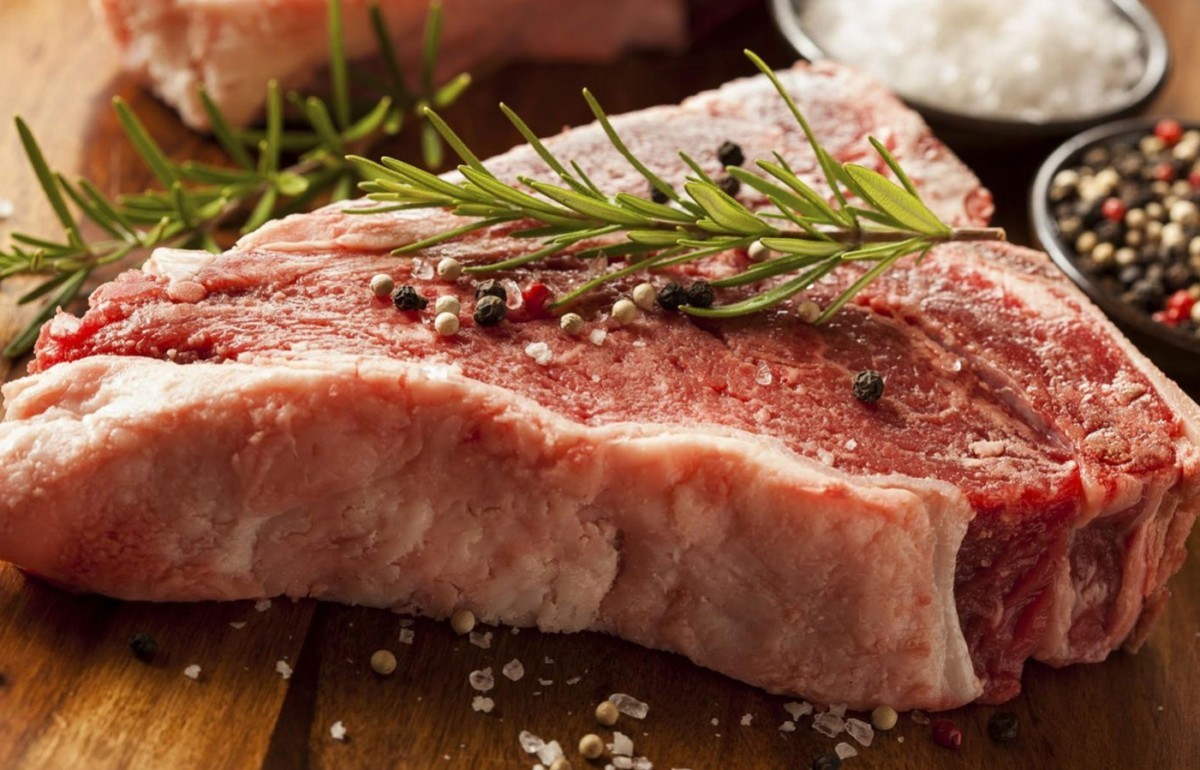 Ossobuco is the most iconic dish in Milan, the capital of Italy’s northern Lombardy region, where it is served with saffron-tinged risotto. One of the key ingredients is actually a flavor-absorbing rice called Carnaroli, my favorite. Lombardy is a rice-growing region.

A delightful fusion of two of Lombardy’s savory traditional dishes, tender ossobuco with saffron risotto is something your palate should definitely try. Ossobuco literally means bone hole… not so appealing as a description, yet very accurate. It is actually a beef cut with bone opened to the marrow.

The best part is savoring the creamy marrow from the bones of the veal. As the veal shanks are slow cooked with broth, vegetables and white wine, rich, intense, meaty flavors are released from the bone into the tasty sauce. I personally love this hearty plate of saffron risotto topped with cross-cut veal shanks. 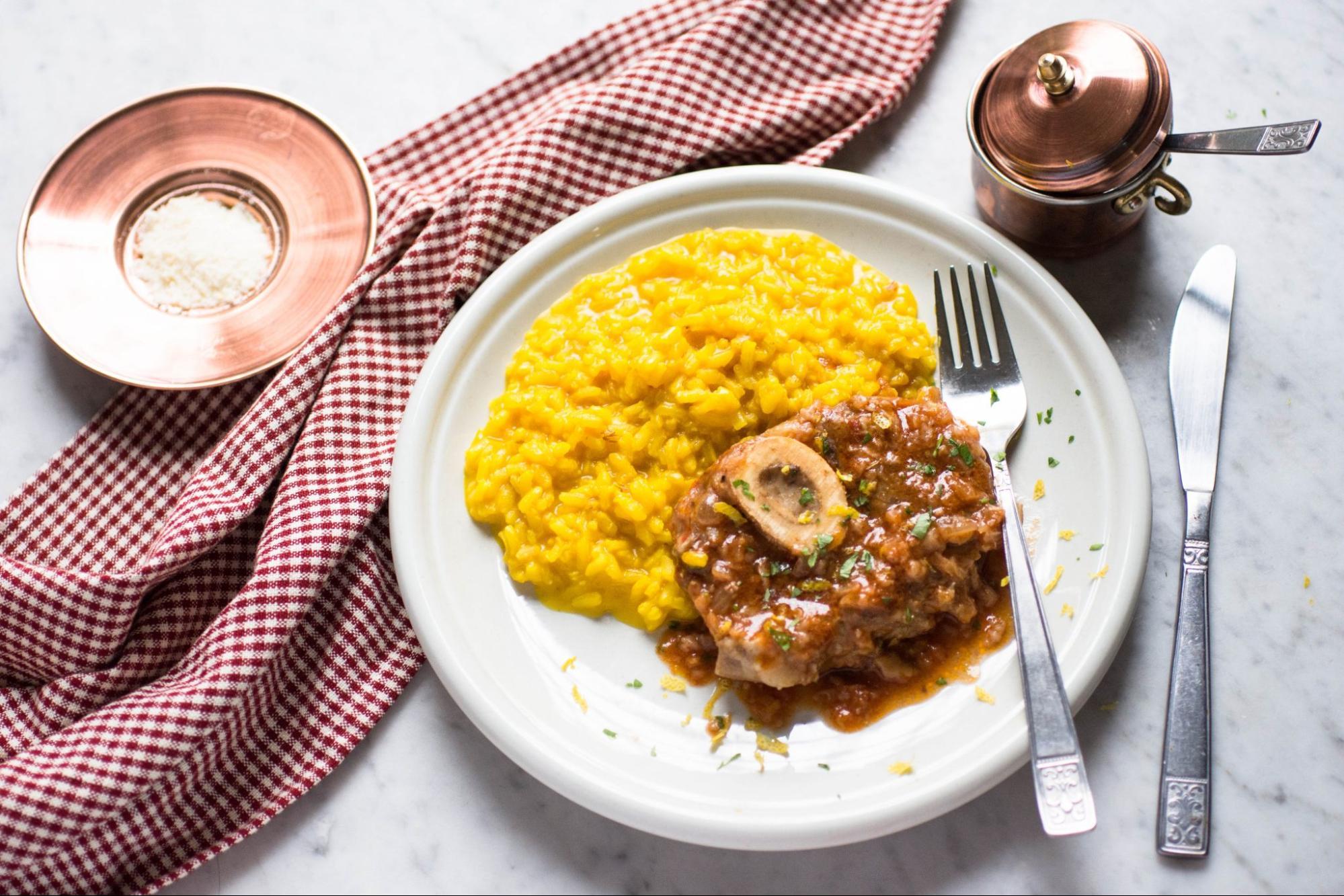 Food in the Dolomites is exquisite, especially when you eat in the mountain huts. Canederli dumplings made from leftover bread, cheese, eggs, parsley and onion are not to be missed.

These delicious farm-style dumplings are served with melted butter and speck, the signature cured pork of the South Tyrol province, home to Italy’s German-speaking minority.

Similar to the Jewish kneydl, Canaderli, or knödel as they are called in German, are usually boiled in beef or chicken broth for a deep, intense, savory flavor. 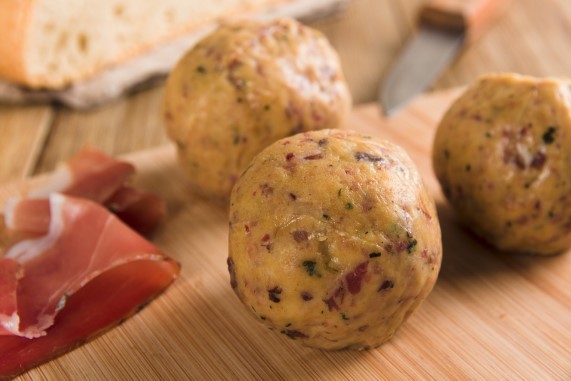 You can’t visit the Belpaese without tasting the famous porchetta romana, literally meaning Roman pork. It actually originated in the charming town of Ariccia, about 15 miles southeast of Rome, central Italy. 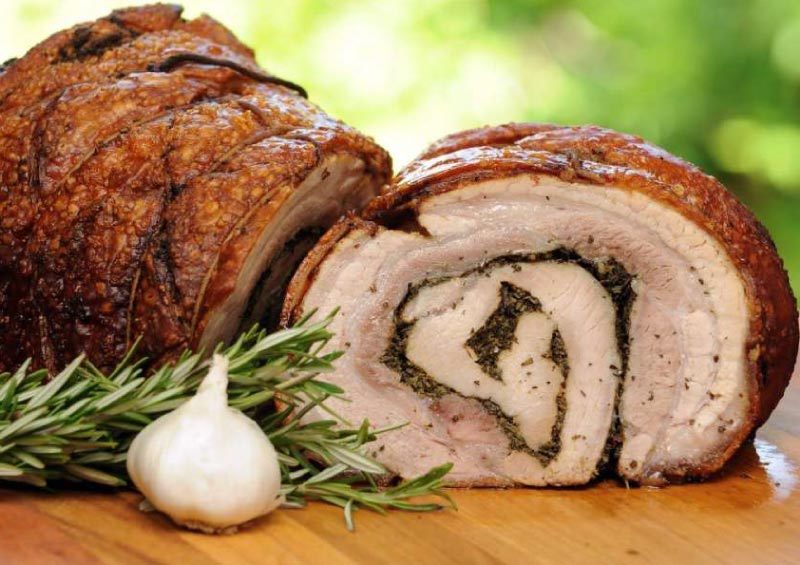 Italy’s version of Swiss fondue, Fonduta Valdostana is a typical dish based on Fontina cheese, characteristic of the fairytale-like Alpine area of Valle d’Aosta. The Aosta Valley is Italy’s smallest region, in the westernmost corner of the country.

Pungent Fontina cheese, the real pride of the region, is used instead of the Gruyère often found in Swiss recipes.

The recipe is similar to Swiss and French fondue, but is made without wine and is usually served in smaller quantities as a first course, with vegetables on the side. It is delicious beyond belief, trust me! 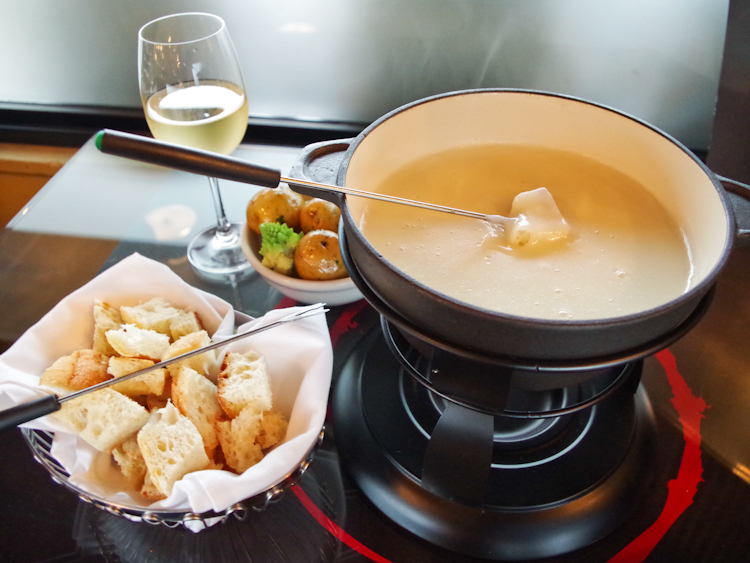 Traditionally they are made with the large, green Ascolana Tenera variety of olive, a DOP product grown only in the southern part of the Marche region. Each green olive is cut away from its pit in a spiral shape. Then the empty olive is stuffed with grated Parmigiano Reggiano cheese, a touch of nutmeg and a combination of several types of meat, usually veal, beef, pork and sometimes lamb and chicken.

Once the stuffing is carefully placed in the hollow, each olive is reformed, rolled in flour, bathed in an egg wash, fitted in a coat of bread crumbs and fried. Olive all’ascolana are often served as street food in paper cones. The different versions of the recipe are innumerable. Along coastal areas of the Marche, sometimes the filling is made with different types of fish. 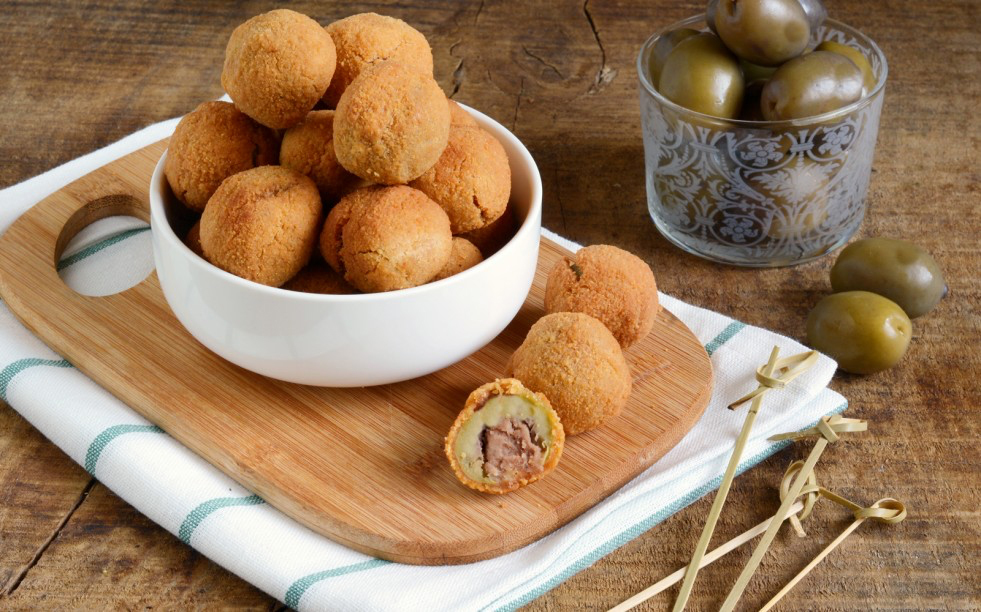 A simple yet tasty and ingenious dish, ribollita is a thick, hearty, robust vegetarian soup of peasant origins, like most Tuscan cuisine. There are many variations, but the main ingredients include stale bread, cannellini beans, cabbage and root vegetables, like carrots, onions and potatoes.

Ribollita literally means “re-boiled”, referring to the fact that is was originally eaten by servants who used their masters’ leftover bread and minestrone. You will be blown away by the simplicity yet richness of this hearty potage. 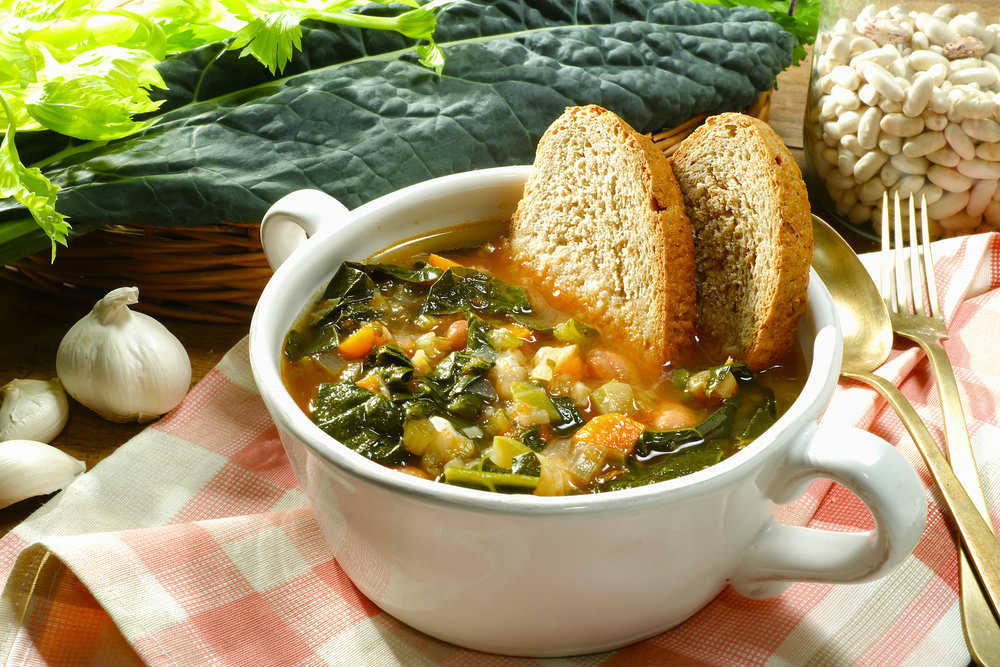 Polenta taragna is a superb delicacy from the beautiful mountains north of Lake Como and the valleys of Brescia and Bergamo, in northern Italy. It has a slightly darker color than traditional polenta, due to buckwheat flour mixed with cornmeal.

Rustic polenta taragna with melted butter and local cheese is one of the most delicious things imaginable. As with many staple foods, polenta has a special place in the hearts of northern Italians, including myself. 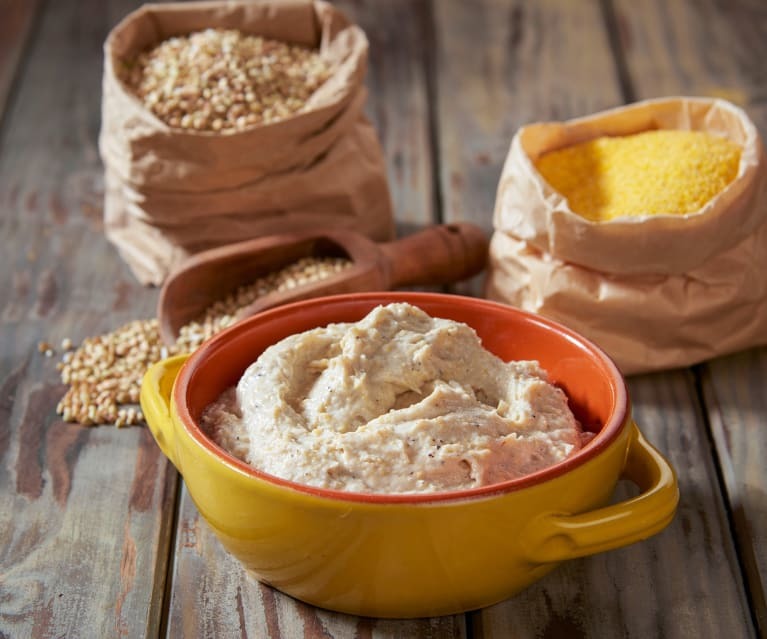 One of Italy’s most simple yet delicious salads is the Caprese, echoing the colors of the national flag. With its distinctive green, white and red ingredients, it literally flies the flag for all Italian salads.

The sunny island of Capri is the birthplace of Caprese salad. The perfect Caprese should be made with:

Eating a ripe, juicy tomato sliced and layered Caprese-style in summer is a pure delight. 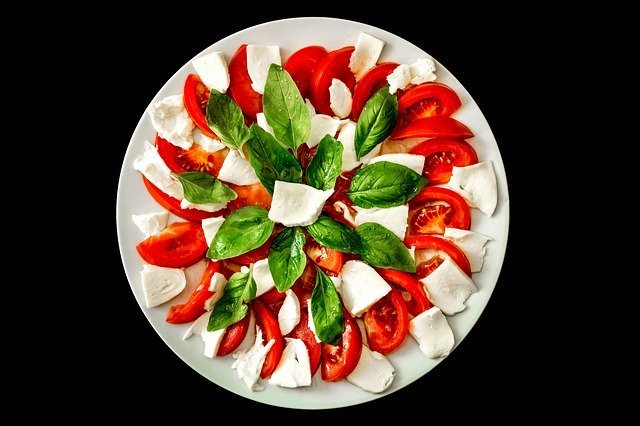 Image by Dusan Tesanovic from Pixabay

Farinata, also known as fainè or fainà, is a thin pancake made from gluten-free chickpea flour, ideal for those with intolerances. This delicious dish originated in Genoa, the charming capital of Liguria, a coastal region of north-western Italy.

The traditional recipe calls for chickpea flour whisked with water, olive oil and salt to make a loose batter that is then cooked in a shallow copper tray in a wood-fired oven at a very high temperature. The result is a mouth-watering, unleavened pancake that is crisp on the outside and soft on the inside. Yum!

You simply can’t visit the South of Italy without trying the fresh seafood brought in daily. A must-try food in Naples, impepata di cozze, or better ‘mpepata, is a delicious seafood main dish with fresh mussels in white wine with garlic, pepper, tomatoes and fresh parsley.

Strongly herbed, its broth is clear and fishy. Impepata di cozze makes for a fun dish to share, with chunks of bread to soak up the juices at the end. Quick and easy, only a few ingredients are required to make it. 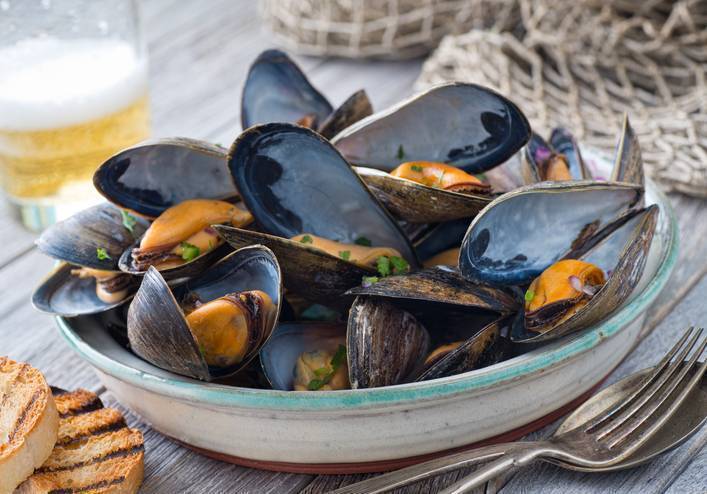 The whole region of Abruzzo in central Italy is crazy for arrosticini, tender skewers of lamb or mutton cooked over an open fire. The meat is cut into little cubes and packed tightly onto a wooden skewer before being slow cooked on a special gutter-shaped brazier called fornacella.

It is thought that these delicious little barbecued morsels, called arrustelle in the local dialect, originated as a portable food for shepherds to cook outdoors. Cooking time is extremely short, being around four minutes with the skewers being turned only once. If you want to taste the best arrosticini, head to the area at the foot of the Voltigno mountain, in the province of Pescara. 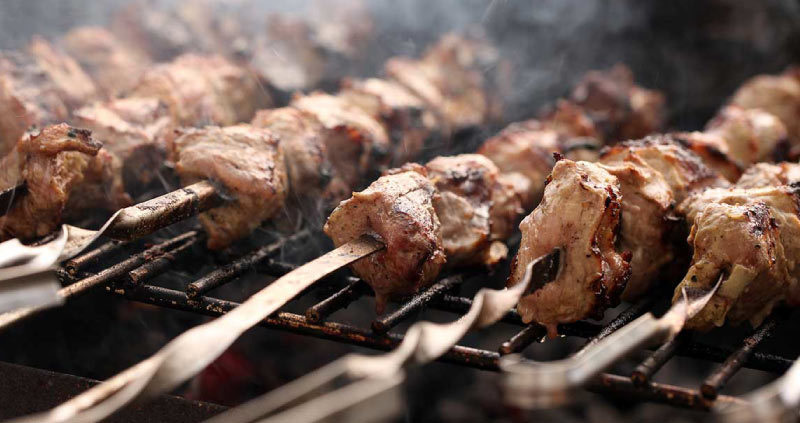 From the Arabic battarikh, amber-colored bottarga isn’t so much a dish as it is actually an ingredient. It is salted, cured, air-dried roe of grey mullet, with a rich, briny and salty flavor.

Introduced by the Phoenicians 3000 years ago, bottarga is made in several places around the Mediterranean Sea, but the variety made in the island of Sardinia is regarded by many as the best. Also called the “Gold of Sardinia” for its amber color, bottarga, or butàriga, is mouthfillingly savory but with a hint of sweetness and an almondy scent.

It can be grated on spaghetti to punch up the flavor, or thinly sliced and served on buttered bread. 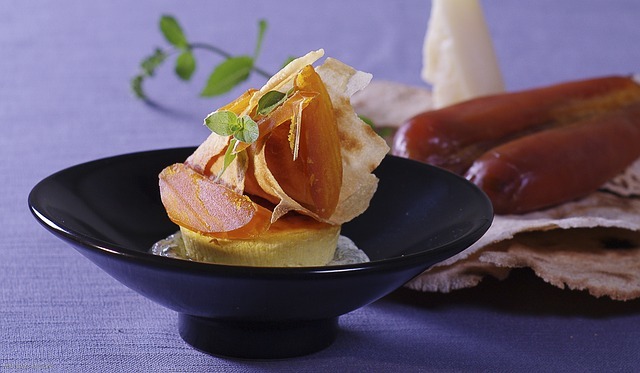 Image by Massimo Migoni from Pixabay

Light and creamy, tiramisù is a classic dessert made of ladyfinger cookies dipped in espresso, covered with a whipped mixture of mascarpone cheese, sugar and egg whites, and flavored with cocoa powder.

My mom usually adds a droplet of Marsala wine to the coffee to booze it up a bit. Literally meaning “pick me up”, tiramisù, a superb delicacy from  the region of Veneto, is one of the simplest yet most delicious coffee-flavored desserts to make.

The ingredients are so common that you can try your hand at making your own. Creative dessert-makers have given the traditional recipe an innovative twist, coming up with bizarre varieties, such as raspberry tiramisù, lemon tiramisù and even pumpkin tiramisù. 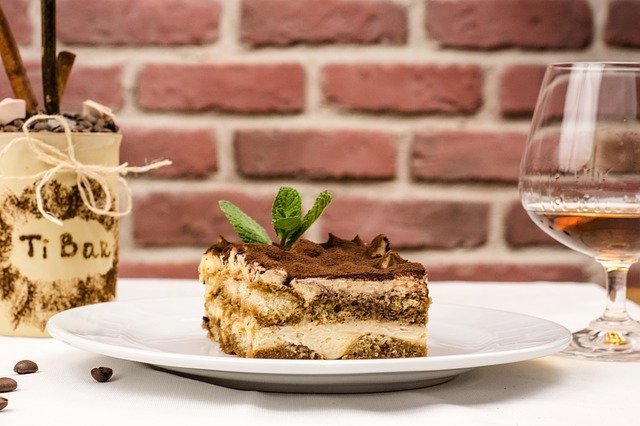 Image by Christo Anestev from Pixabay

As you can see, there’s so much more to eat in Italy than pasta and pizza, and it would be a mistake to ignore whatever else the Belpaese has to offer. Are your taste buds ready? Dig in!