How to Talk About the Past in Italian Using the Imperfetto

Most Italian learners are a little intimidated by the imperfetto, one of the main past tenses in Italian. The imperfect tense (imperfetto) refers to both distant and recent past occurrences that happened on a regular basis.

In this lesson, we will show you how to use the imperfetto tense and will give you some tips to help you avoid some common pitfalls. Its rules are pretty straightforward and once you learn them, it will begin to come naturally. 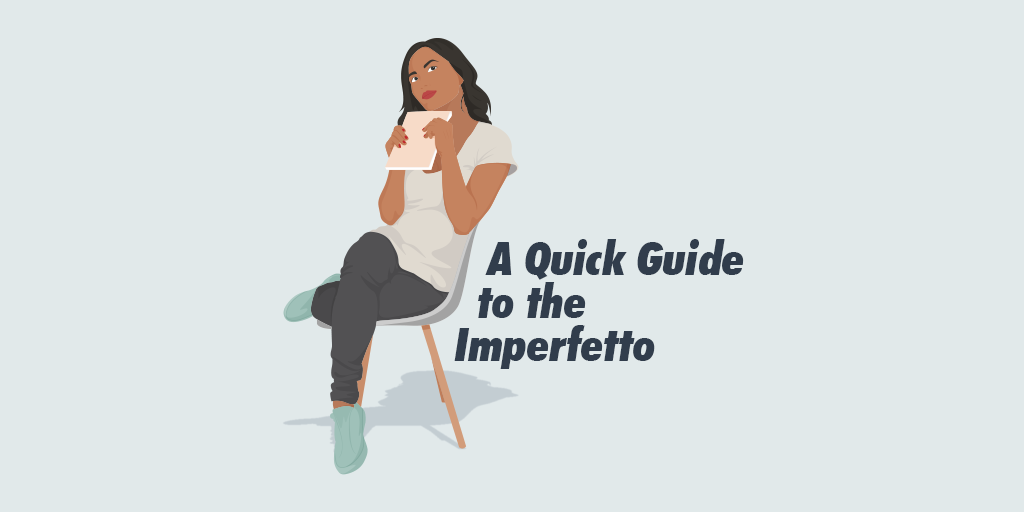 The imperfect tense in Italian can be a little tricky at first, because it doesn’t have an exact equivalent in English.

The imperfetto is a past tense used to:

(1) Talk about oft-repeated or habitual actions in the past:

(2) Describe a situation in the past:

(4) Describe time or weather in the past:

(5) Describe the ongoing state of objects, places and people in the past:

(6) Express an emotional or physical state that occurred in the past, and is now over:

(7) Talk about two or more events that happened simultaneously in the past:

(8) Describe an action that was taking place when something else happened:

As you can see, that’s a lot of uses!

How to Construct the Italian imperfetto

Lucky for you, the imperfetto is one of the most stable Italian tenses and is formed by adding the same endings to all three verb types. The only difference is the typical vowel of the infinitive.

The imperfetto is formed by taking the -re off the end of the infinitive and replacing it with:

That’s it! This works with all regular verbs. As you might have noticed, the characteristic letter of the imperfetto tense is the letter “v”:

Once you learn one set of endings, it will be easy to learn the subsequent two because they all follow a similar pattern.

Aside from the Italian verb “essere”, the other irregular verbs to beware of in the imperfect form are those that end in -orre, -urre and -arre, such as:

While the endings are similar, the stem used is not as easy to form. Fortunately, they tend to be the same troublesome verbs that are also irregular in other tenses in Italian, so they are easy to spot. Let’s go over some of the most common irregular verbs in the imperfect form:

We recommend committing those to memory.

Fortunately, the Italian verb “avere” is regular in the imperfect tense:

Which phrases are typically used with the Italian imperfect tense?

Here is a list of adverbial expressions that are usually used with the imperfetto in Italian:

Confused by the past tenses in Italian? Understanding when to use the imperfetto over the passato prossimo can be tough at first, and most English speakers who decide to learn Italian struggle with this. Here are some tips to help you with the use of these two past tenses.

As mentioned previously, the imperfetto describes repeated or habitual actions in the past as well as the characteristics and frequency of past situations.

Events that happened long ago may be expressed using the passato prossimo when they still have an active relationship to the present.

If you are talking about an action in the past that happened at the same time as something else, then you use both.

Colloquial uses of the imperfetto

There are colloquial uses of the imperfetto which are well worth learning. It is quite common in colloquial speech to skip complicated grammar structures and use the imperfect tense instead.

In spoken everyday language the imperfetto is commonly used instead of the conditional and past subjunctive, which take longer to say. So, the imperfetto has become an acceptable alternative in casual, informal conversation. It is crucial for foreigners to learn its colloquial uses to understand what people are talking about.

The following example is a classic use of the imperfetto in place of a subjunctive tense, which would have been grammatically correct.

The above is considered incorrect but it is what most native Italian speakers would actually say when speaking at a colloquial and informal level. The technically correct but rather complex version is appropriate in formal communication and written Italian: Se avessi saputo che eri vegetariana, non avrei preparato l’arrosto.

Here are other examples:

The imperfect tense is also used in place of the conditional to make a request sound less imperative.

How to translate the imperfetto into English

English and Italian have different past tenses and there is no exact one-to-one correspondence between how they are used. The imperfetto corresponds roughly to “used to” or the past continuous tense. The most similar phrasing you have in English is perhaps the expression “used to,” but it is not a direct translation.

Widely used both in the spoken and written language, the imperfetto in Italian may need to be translated with:

The past continuous tense

The simple past tense

How to pronounce verbs in the imperfect form

Lots of students get tripped up on which syllable to stress in Italian imperfect verbs.

You should stress the penultimate syllable on imperfetto verb conjugations, except in the third person plural (loro), when, as in the present, the stress falls on the third to last syllable (antepenultimate).

This might sound a bit weird to you at first but this rhythm will come to feel natural with a bit of practice.

Quando ero piccolo, mangiavo la pasta tutti i giorni – When I was a kid, I used to eat pasta every day

Developing an understanding for which tense to use in a sentence is not something you can learn by simply studying grammar rules. It will take time and requires you to spend a lot of time with the language till you develop a natural feel for the correct tense form to use.

Read and listen to Italian as much as you can to speed up this process. The more you expose yourself to Italian, the more natural this and other grammatical structures will become for you.