Beautiful Little Towns in Italy You Probably Never Heard of Before

Showstoppers like Venice, Florence and the Amalfi Coast are world renowned, but there are so many more hidden gems in Italy to be explored. Take a journey through some of the lesser-explored but interesting corners of the Bel Paese.

Here is our guide to 15 of Italy’s best-kept secrets you need to visit before they are overrun by tourists. 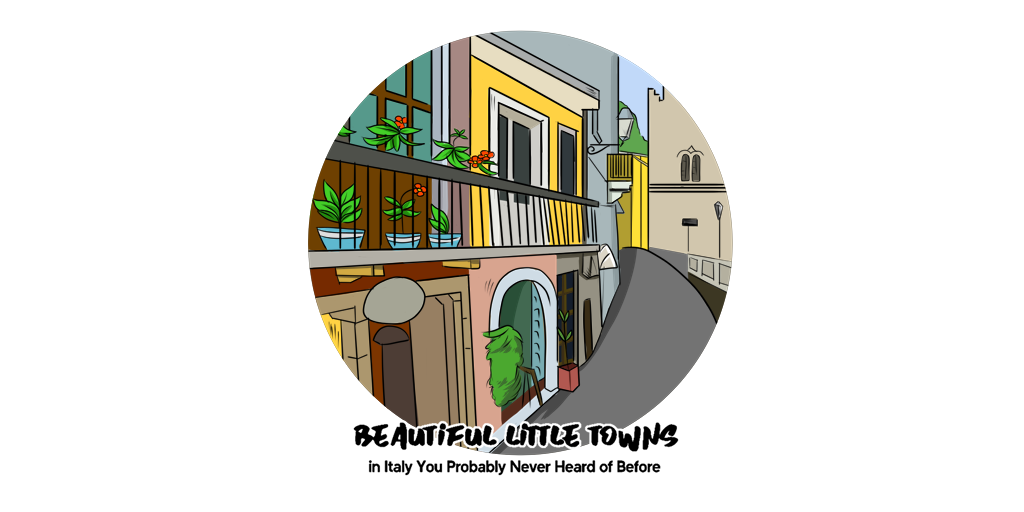 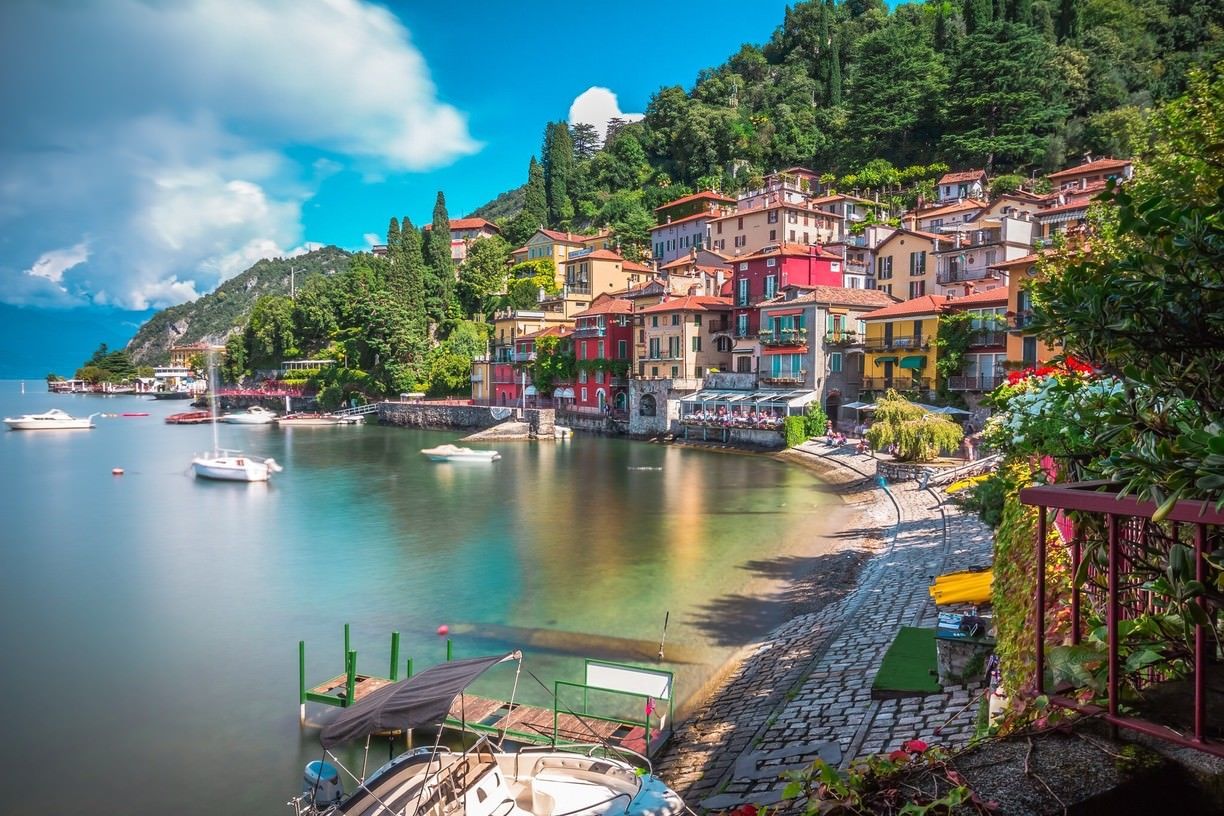 Image by Irene Chan from trover.com

Varenna is a fairytale-worthy village tucked away on the eastern shore of Lake Como, looking over the central part of the lake. More reasonably priced than its more famous neighbor Bellagio, Varenna makes a great place to enjoy your Lake Como adventure. Its charming network of cobbled lanes, picturesque fishermen’s houses and art-filled villas are unpretentiously appealing. 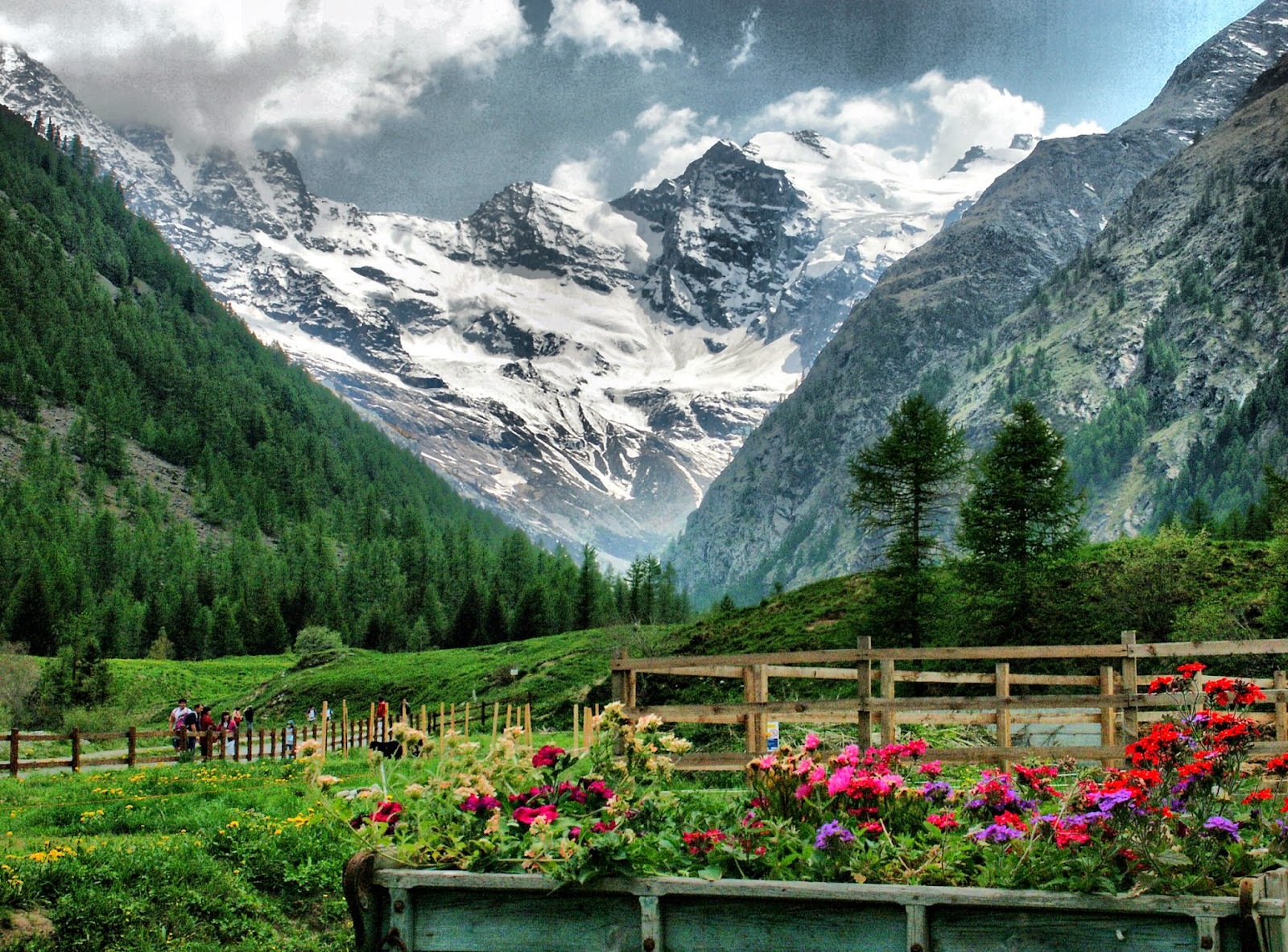 At the heart of the Gran Paradiso National Park, one of the oldest protected areas in the Graian Alps of northern Italy, Cogne boasts a rich cultural and historical heritage.

A magical place for both winter holidays and a summer stay, Cogne, pronounced /koɲ/, is a uniquely beautiful location. At the southern edge of the town center is a large gorgeous alpine meadow known as Prato di Sant’Orso (St. Ursus Meadow), which has received recognition as a Wonder of Italy. 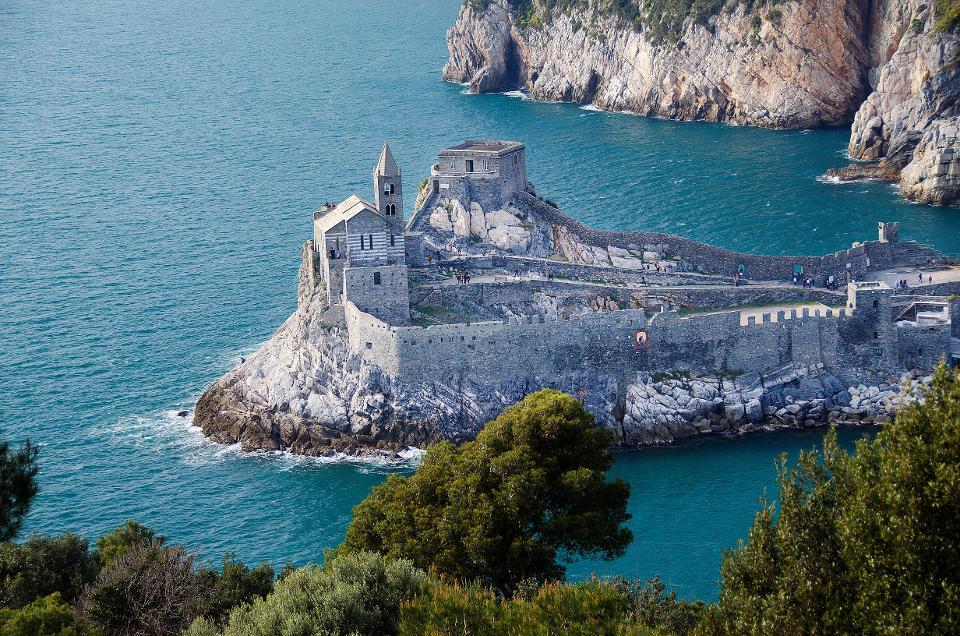 It wouldn’t be an exaggeration to say that Porto Venere, a Riviera gem overlooking the Gulf of La Spezia, is one of the most beautiful places on earth. Scenic and romantic, the town of Porto Venere is less ravaged by mass tourism than its more famous Cinque Terre neighbors.

It is known for its picturesque harbor lined with colorful houses, narrow medieval streets and the 6th-century Church of Saint Peter, perched at the edge of a rocky promontory jutting out into the deep blue sea. You can climb to the top of the church and admire a heartbreakingly beautiful landscape, especially with rough sea. Byron’s Cave is an awe-inspiring rocky area leading to the sea, where, legend has it, the English poet Lord Byron used to swim.

Like the Cinque Terre, Porto Venere, on the Gulf of Poets, has UNESCO World Heritage status. 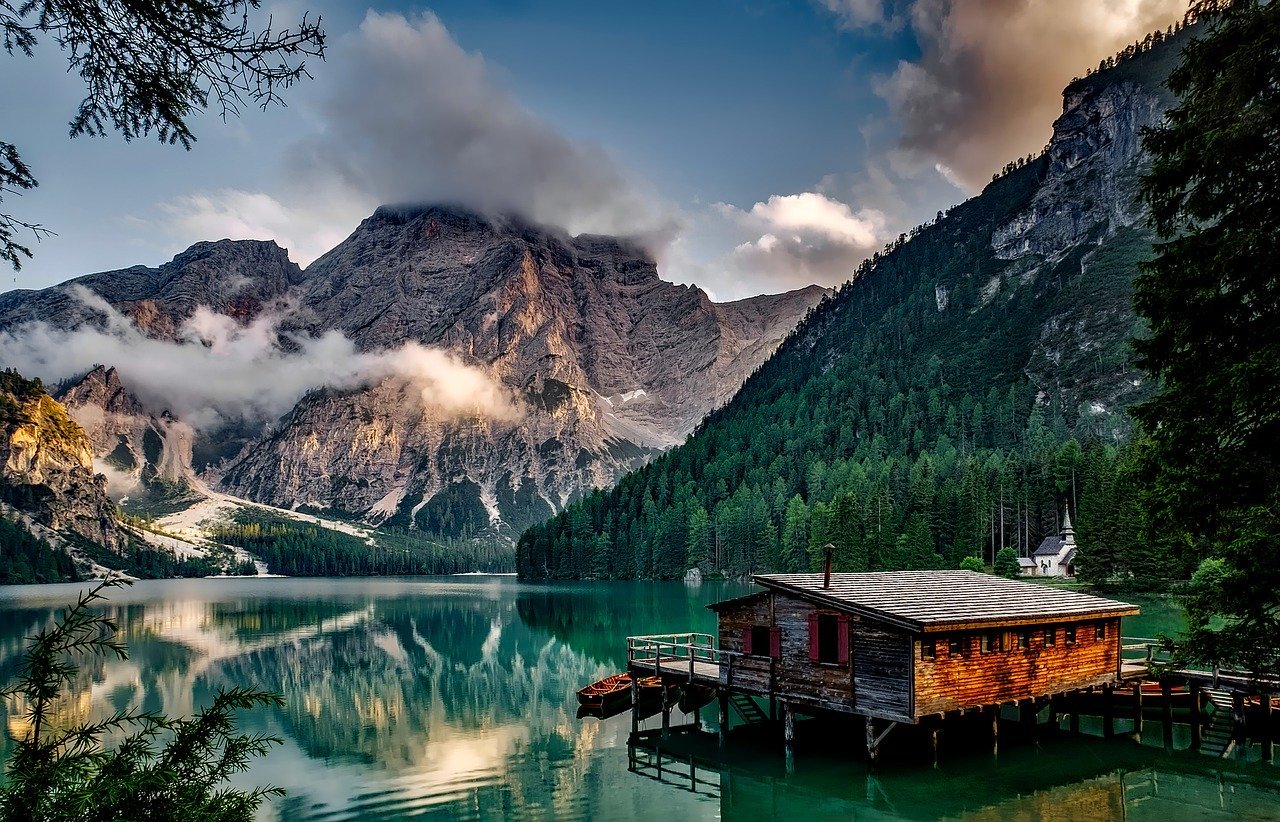 Image by David Mark from Pixabay

Many English-speaking travelers are used to seeing the Roman Colosseum or the leaning tower of Pisa when searching for photos of Italy, but there is so much more. Home to Italy’s German-speaking minority, Trentino-Alto Adige region boasts a diverse landscape that includes lush forests and towering mountain ranges.

Located in Val Pusteria (Puster Valley), in the Fanes-Senes-Braies natural park, Braies truly is one of Italy’s hidden gems. Also known as the Pearl of the Dolomites, Lake Braies, or Pragser Wildsee in German, is one of the most stunning and photogenic Alpine lakes in Italy. You will be amazed by its beauty!

Hiking around Lake Braies is the perfect way to take in the scenery. My advice is to visit it early in the morning, when the mountains are reflected in its emerald green water. 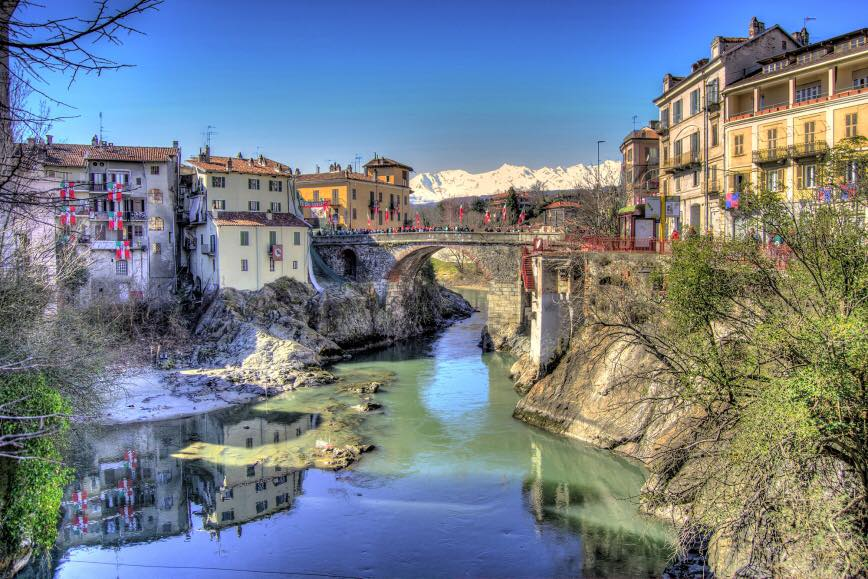 In the Piedmont region of northwestern Italy, Ivrea is a lovely town which offers an exquisite blend of very beautiful landscapes, delectable food and fine wines.

The pretty town of Ivrea is an absolutely must-visit stop during the Carnival season. The core celebration of Ivrea Carnival revolves around the Battle of the Oranges, the largest food fight in Italy.

A real off-the-beaten-track adventure, the epic Battle of the Oranges is a commemoration of an epic skirmish that took place in medieval times between oppressed locals and tyrannical lords. Thousands of people in medieval attire divide themselves into nine combat teams, and throw oranges at each other.

The Battle of the Oranges in Ivrea can be considered the Italian version of La Tomatina, a funny food-fight festival held in Buñol, 25 miles from Valencia, Spain. 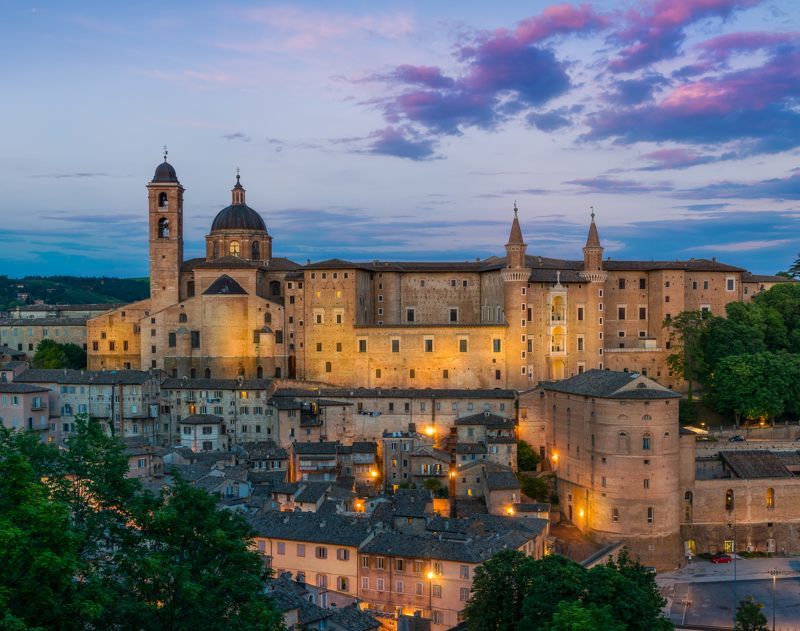 About 20 miles from the Adriatic coast, Urbino is a picturesque Renaissance hill town in the northern part of central Italy’s Le Marche region, one of the least-visited yet interesting areas of the Bel Paese. Birthplace of artist Raphael, Urbino has a Renaissance center that was declared a UNESCO World Heritage Site in 1998.

Its huge and impressive Ducal Palace (Palazzo Ducale) houses one of Italy’s most important collections of Renaissance paintings. The city has a fortress at the top of the hill and a university dating from the early 16th century. 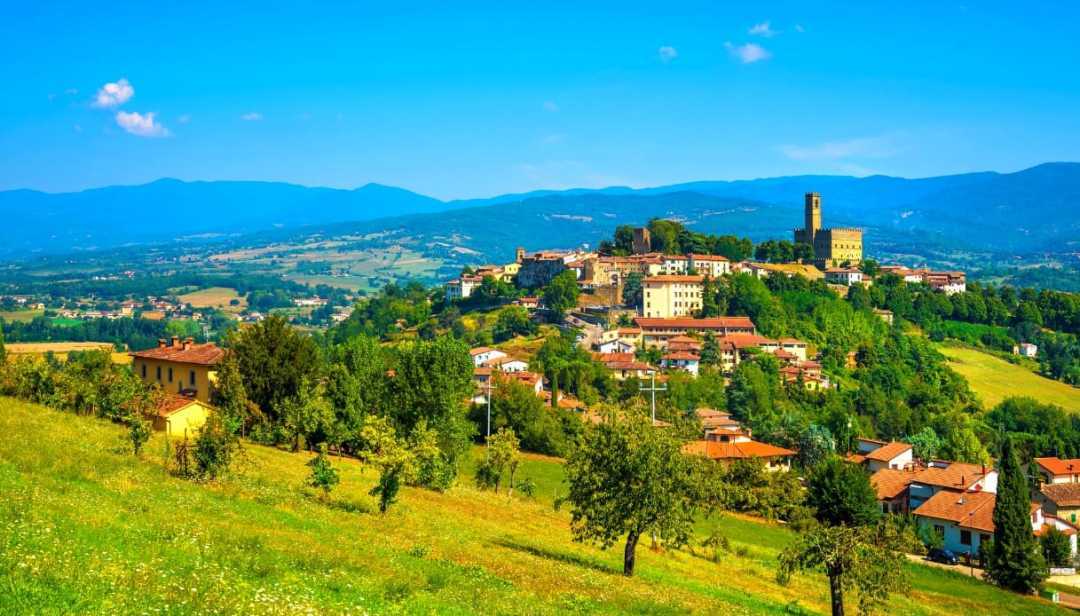 In the province of Arezzo in the Italian region of Tuscany, the medieval town of Poppi is set on a dominant hill about 30 miles east of Florence. One of Tuscany’s best preserved castles, the 12th-century Poppi Castle is a medieval fortress overlooking the Casentino Valley, one of Tuscany’s forgotten corners, still untouched by most tourist routes.

Still sporting its original drawbridge and mullioned windows, Poppi Castle is said to have a resident ghost, like most ancient castles. It is Matilda, the licentious wife of a member of the ruling family, who, legend has it, used to seek the company of handsome young men from the town and hurl her lovers into a well after having spent a night with them. This practice resulted in her being locked up in the Devils’ Tower (Torre dei Diavoli) by angry townspeople. It is said that her restless spirit still haunts the castle. 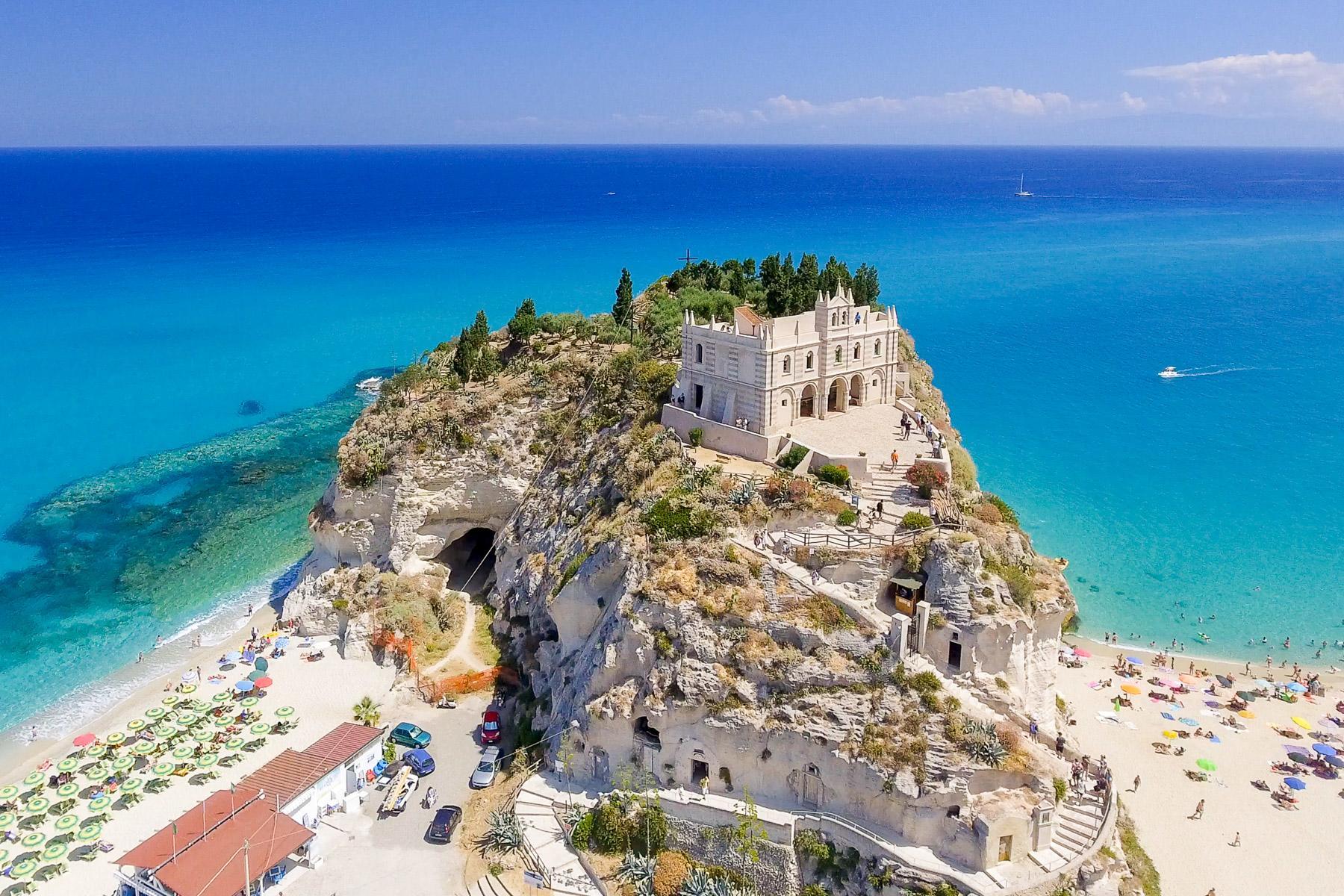 One of Italy’s best-kept secrets is Tropea, a beautiful seaside town in the province of Vibo Valentia, on the east coast of southern Italy’s Calabria region. Perched on an imposingly steep cliff with stunning views of the Tyrrhenian Sea below, Tropea is known for its blissful beaches, crystal-clear waters and Instagrammable locations.

Though it is well-known in Italy, most English-speaking travelers have never heard of it. Pack your bags, then, it’s time to visit sun-kissed Tropea, also known as the Pearl Of Tyrrhenian, one of the finest holiday destinations in the Bel Paese, yet unvisited by many. 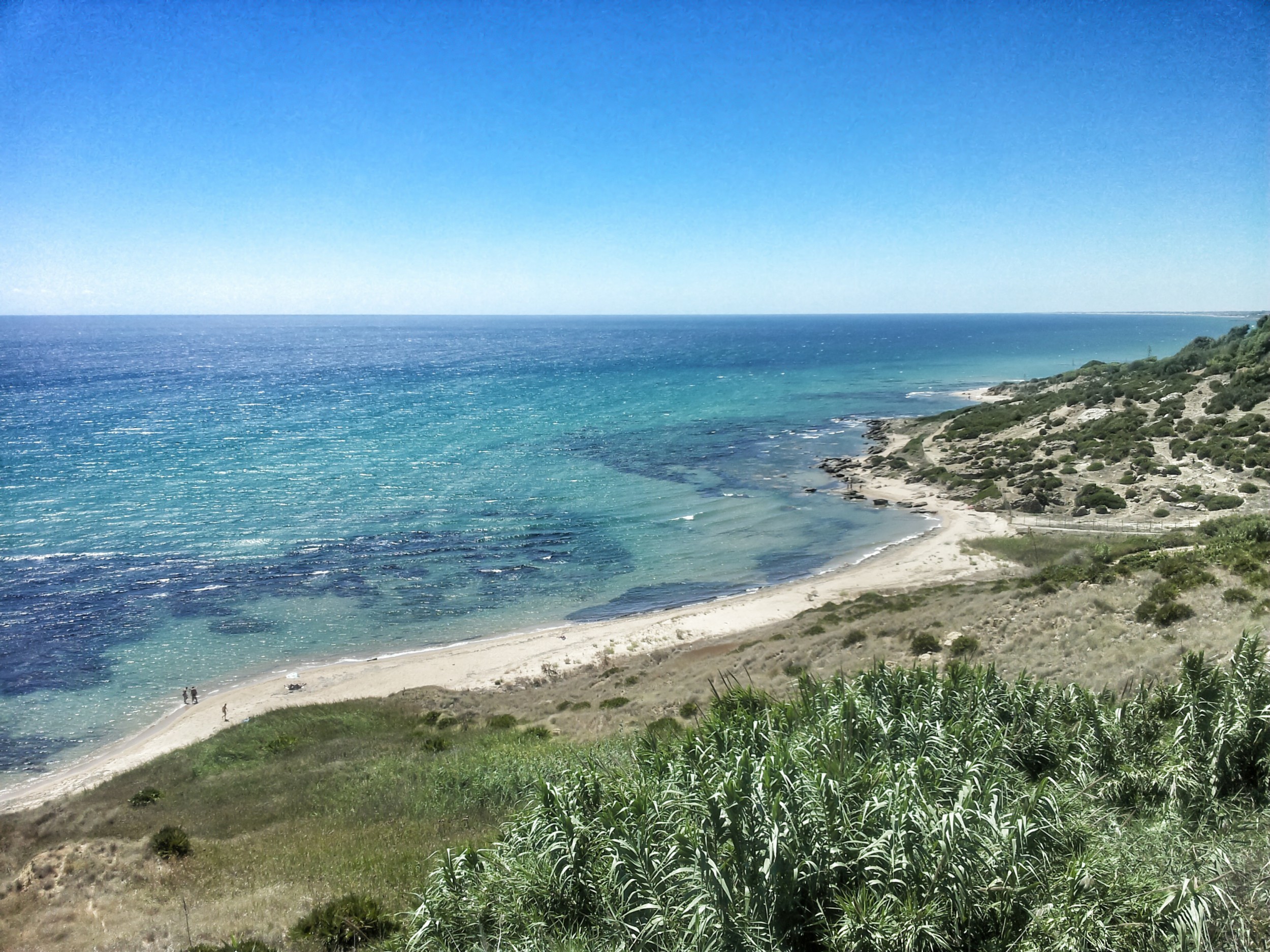 Still largely off the tourist radar, south-western Sicily is ideal for getting to know the real side of the Bel Paese, from its paradisiacal golden beaches and rocky coves to its picturesque villages and scenic archaeological sites.

Sitting between the picturesque fisherman village of Sciacca and the impressive acropolis of Selinunte, home to majestic temples built by the ancient Greeks, Menfi is one of the finest and most historic wine towns in the South of Italy.

Surrounded by gentle rolling, vine-carpeted hills, the ancient town of Menfi – not to be confused with Memphis, Tennessee – is home to Planeta, arguably the island’s main producer of quality wine. 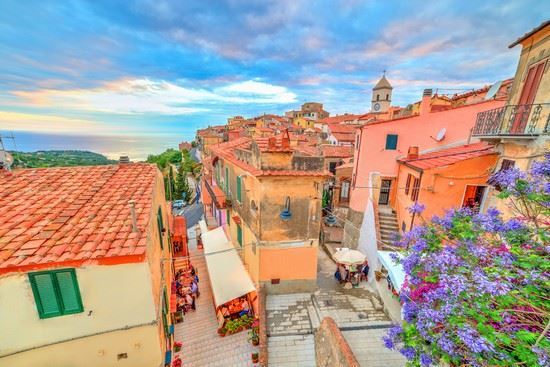 Best known for Napoleon’s exile, Elba is Italy’s third-largest island, after Sicily and Sardinia. A nice little medieval town on the Tuscan island of Elba, Capoliveri lies on the top of a hill overlooking the Tyrrhenian Sea.

About 6 miles off the Tuscan coast, the town of Capoliveri consists of a network of narrow streets lined with pretty flower-laden balconies, often passing underneath archways.

If you haven’t visited the island of Elba yet, you have to. It has an exotic blend of peaceful beaches, vineyards and turquoise bays. When Mother Nature was distributing charm, she must have piled up the goodies high when it came to Elba. Napoleon would probably think twice about fleeing it today... 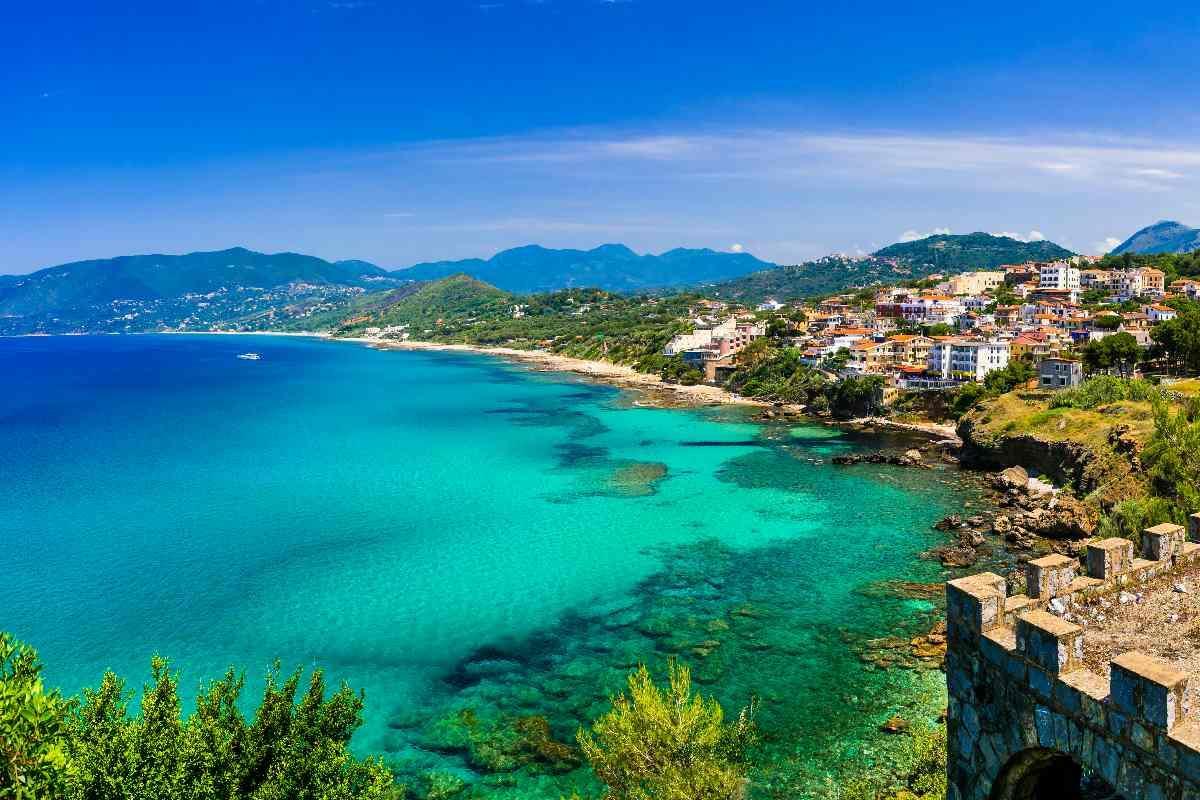 In the charming seaside resorts of Palinuro, on the southern side of Cilento, Campania, you will find some beautiful, pristine beaches that the locals tend to keep for themselves. An imposing headland above the town’s harbor, Capo Palinuro is one of the most beautiful stretches of coastline in Italy’s Mezzogiorno.

Its treasures are its coastal havens, underwater caves and grottoes, a real paradise for divers. The most spectacular one is brilliantly colored Grotta Azzurra (Blue Grotto), named after the spectacular play of sunlight on the glittering turquoise water.

A pristine medieval village perched on a plateau of volcanic rock surrounded by steep ravines, the picture-perfect town of Civita di Bagnoregio is also known as The City in the Sky, due to its location atop a crumbling rock. It is a magical place that looks like it is straight out of a fairy tale.

About an hour’s drive north of Rome, in Italy’s Lazio region, this gorgeous town in the Province of Viterbo was founded by the Etruscans over 2500 years ago. A bridge connects Bagnoregio with the ancient hamlet of Civita. Crossing it feels like going to another dimension.

This is still virgin territory for most English-speaking travelers. Get there before the rest of the world catches up to the lovely town of Civita di Bagnoregio. 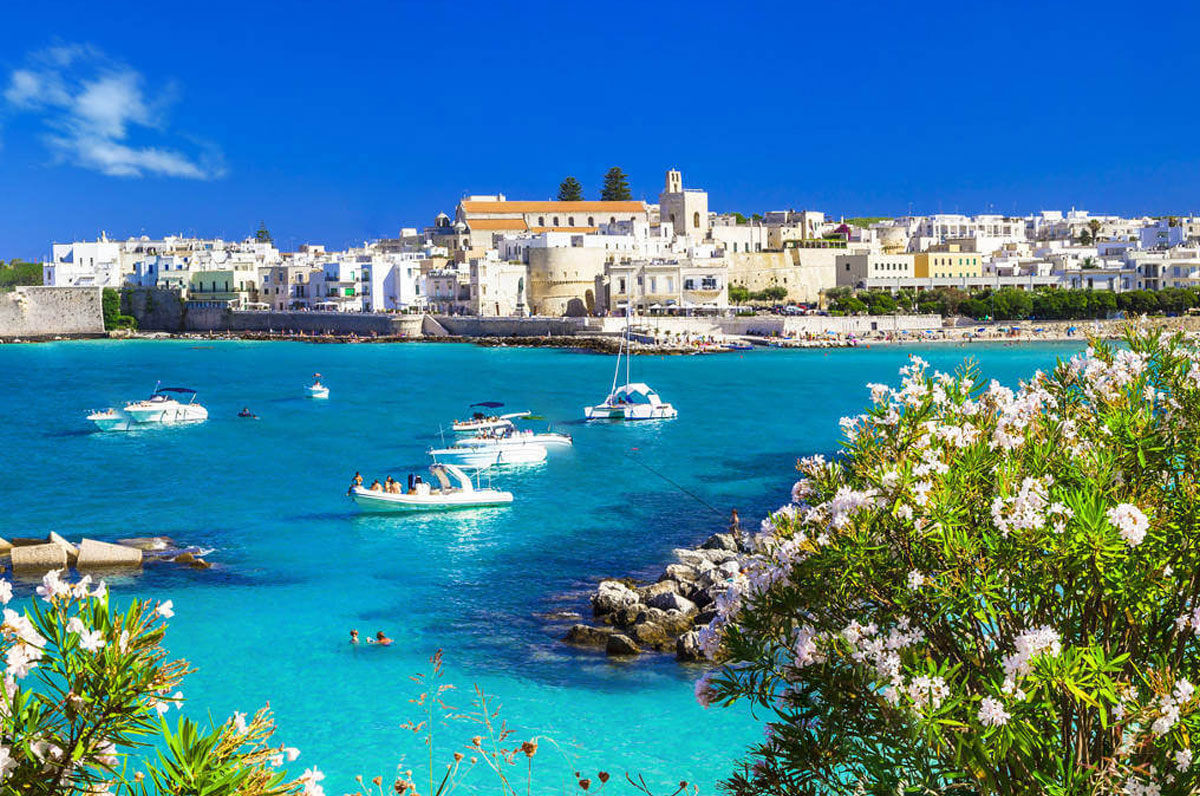 Beautiful seaside town in the region of Apulia, on the heel of Italy’s boot, the pretty town of Otranto offers an amazing mix of history, crystal-clear waters and laid-back holiday atmosphere. You might have probably heard of it for Horace Walpole’s gothic novel The Castle of Otranto (Il castello di Otranto).

Gazing out over the Adriatic Sea towards the Balkans, Otranto, pronounced with the stress on the first syllable, is Italy’s easternmost town. In the province of Lecce, it was a strategic site in the ancient world and has a very interesting past. Everyone from the Greeks, Romans and Ottomans to the Turks, and Normans have ruled the city.

Lying deep in Italy’s stiletto, Otranto’s picturesque city center is enclosed within its thick defensive walls, and at night the streets come alive with music and handcrafted vendors. 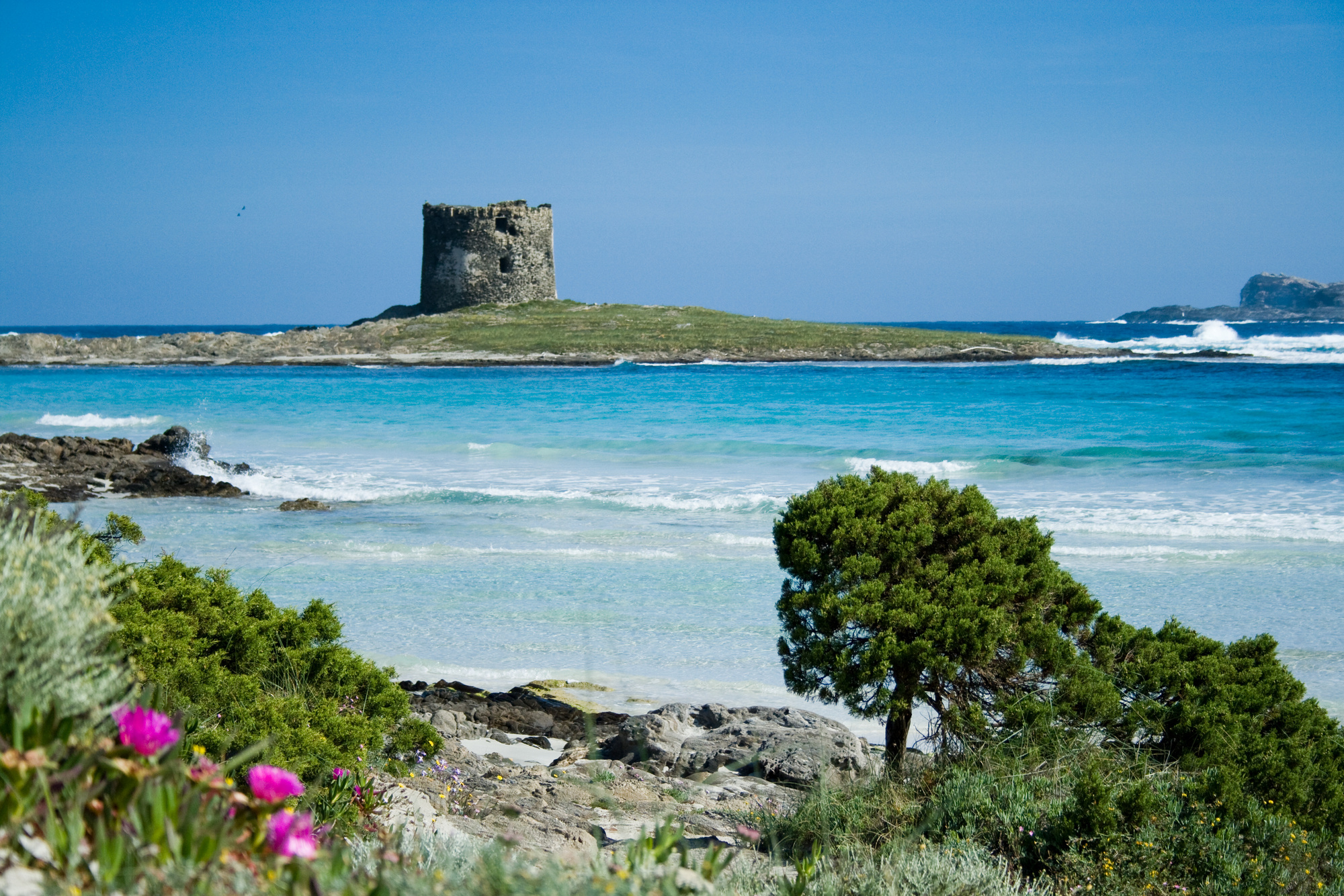 With its crescent of powder soft sand and turquoise waters, fabled white sand Pelosa beach takes the definition of paradise to a whole new level. About 2 miles north of Stintino, this is a favorite destination among wind- and kitesurfers.

Pelosetta beach looks out on to the island of Asinara, a wildlife haven declared National Park in 1997, which in the past was home to one of Italy’s most notorious prisons. 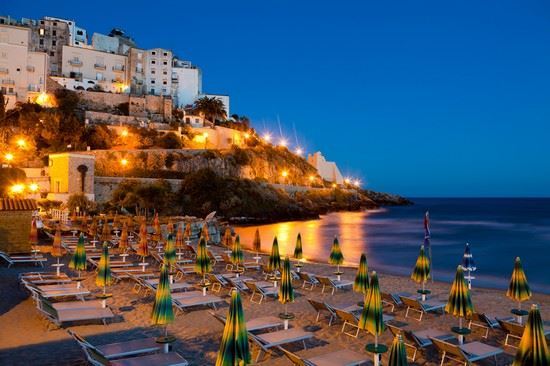 Image by Anton Balazh from Shutterstock

About halfway between Rome and Naples, Sperlonga is a tiny seaside town perched on the sides of Monte Magno, overlooking the deep blue Tyrrhenian Sea.

Said to have once guided Odysseus’s ship like a lighthouse, this lovely seaside village in the province of Latina is one of the nicest hamlets in the country, with its pretty whitewashed houses and delightful little squares.

Spend some time exploring its overflowing gardens, ruins, old palaces, museums and golden-sand beaches. You’d think the shiny white limestone of this pretty town would be high up on the tourist wishlist. The truth is few seem to have discovered the charms of its picture-perfect alleyways.

Are your bags packed yet? It’s time to explore the corners of Italy that tourists haven’t yet found out about.