10 Unusual Places to Visit in Italy

Italy is chock-full of quirky, surreal and mysterious sights to visit. Skip the overcrowded big-name attractions like Venice, Florence and Rome for lesser-visited, unusual destinations. Here is a list. 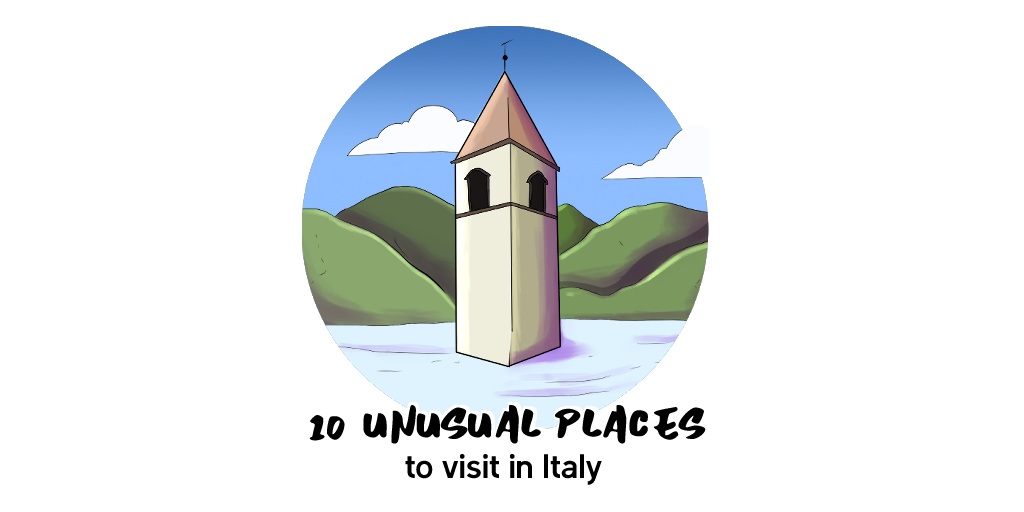 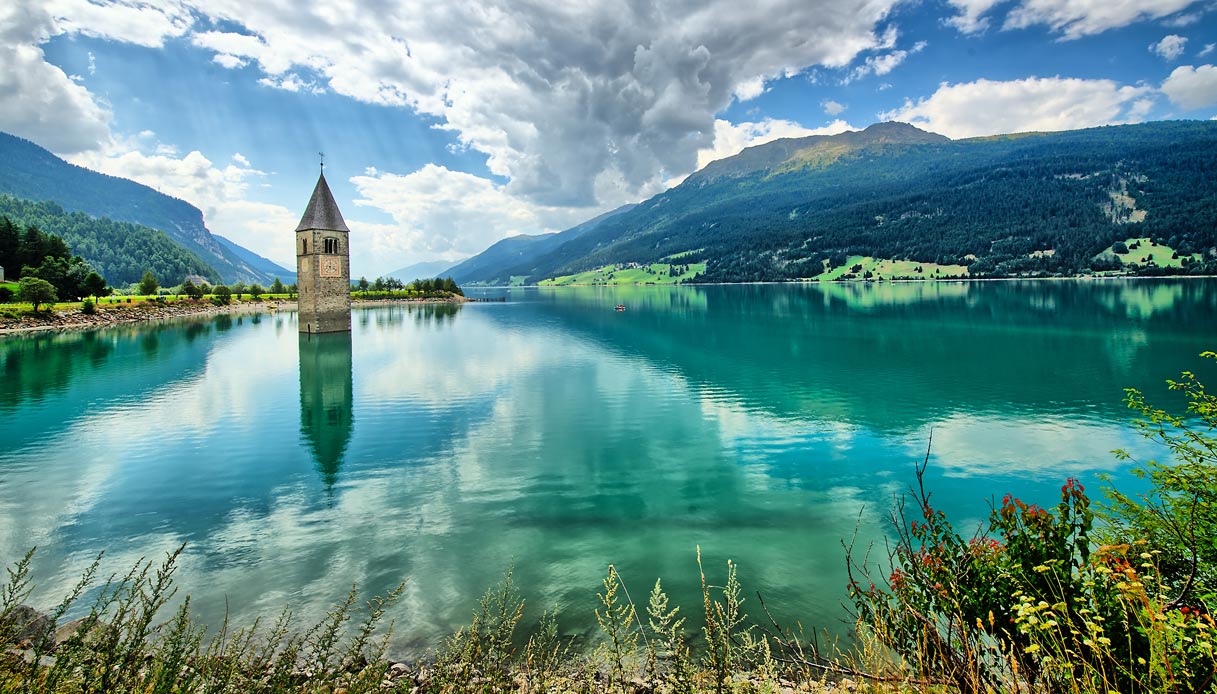 If you want to see something unusual, how about visiting Italy’s most famous drowned village? Now all that is left of the once thriving alpine village of Curon Venosta, in the western portion of South Tyrol, is its church’s bell tower, which stands partially submerged in the emerald green waters of a lake.

How come, you ask? Well, in the 1950s the old town of Curon Venosta (Graun im Vinschgau in German) and its surrounding villages were completely flooded to create a dam, so that electricity production could be increased. Hundreds of inhabitants were forced to leave their homes. Two small natural lakes were joined to create a larger, artificial one, known today as Lake Rèsia, or Reschensee in German.

In winter, when the lake freezes over, you can walk across the ice all the way to the bell tower, and look down to what’s left of the 14th-century structure, still visible below the surface. This is, without a doubt, a powerful reminder of the destructive choices made in the name of progress.

The ghost town of Consonno, Lombardy 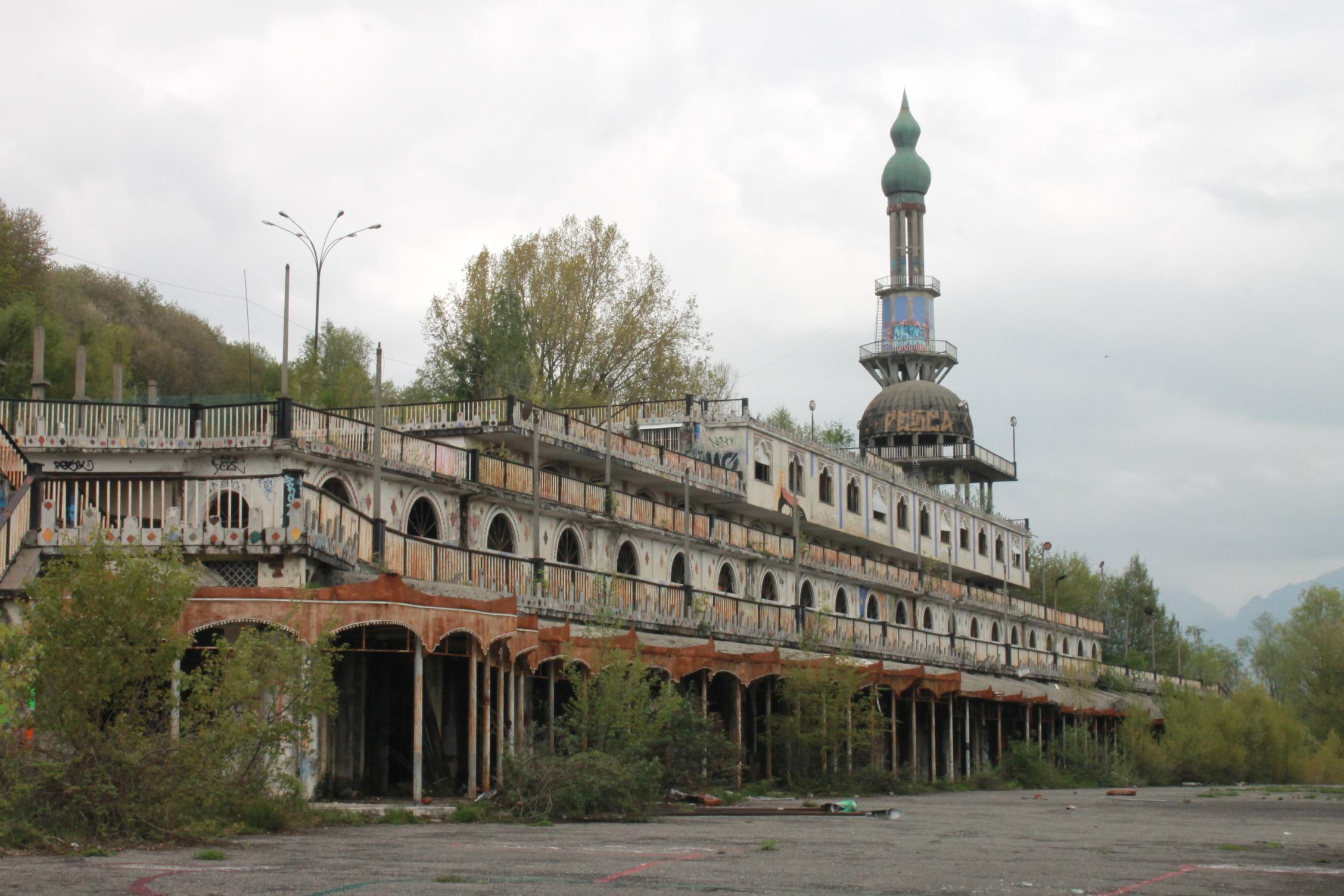 Consonno is a ghost town in the province of Lecco, in the foothills of the Alps. It was built in the 1960s by Count Mario Bagno, a real estate developer who wanted to create a Las Vegas-style ode to wealth and hedonism in Lombardy, with casinos, clubs, hotels and shopping arcades.

The two-storey main building includes an arabesque commercial gallery with dozens of stores, topped with a 100-foot-high minaret which resembles a mosque. Chinese pagodas, Egyptian sphinxes, Renaissance fountains, Doric columns and a medieval castle decorated the site, with a bizarre mixture of architectural styles.

In the early 1970s, the hilly town of Consonno briefly enjoyed success, attracting hordes of pleasure seekers, including celebrities like Mina and Adriano Celentano. Then, in 1976, a landslide buried the only road into town, and Consonno has been a ghost town ever since.

With its suggestive combination of derelict buildings and postcard-worthy views of the mountains, it is frequently used as a setting for photo shoots and music videos.

San Fruttuoso and the Christ of the Abyss, Liguria 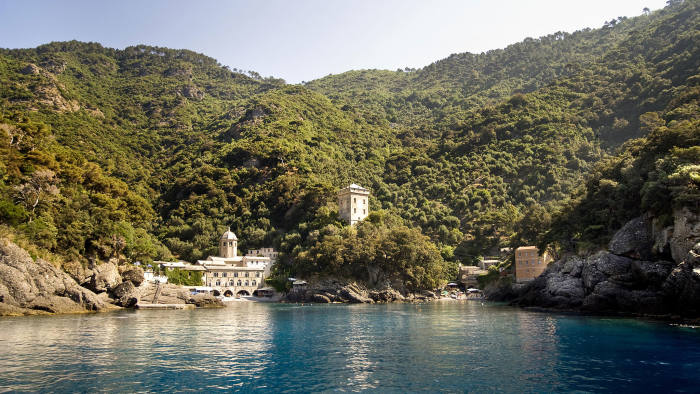 Only accessible by sea or on foot via a panoramic coastal walking trail, the Abbey of San Fruttuoso sits on a stunning peninsula between the fishing village of Camogli and pastel-hued Portofino. Inaccessible by road, this Romanesque waterfront abbey is idyllically set within a blissfully quiet cove, where it appears like a mirage.

This exquisite monument dating back one thousand years has been a Benedictine monastery, a refuge for fishing boats and even a pirates’ den. This gorgeous stretch of Ligurian coast has remained pretty much the same for centuries.

In 1954, an 8-foot-tall bronze statue of Christ with his arms outstretched was submerged 56 feet deep into the water just off the shore to mark the spot where the pioneering Italian diver Dario Gonzatti had died tragically a few years previously. Evocatively titled the Christ Of The Abyss, it has become an attraction for divers from all over the world. 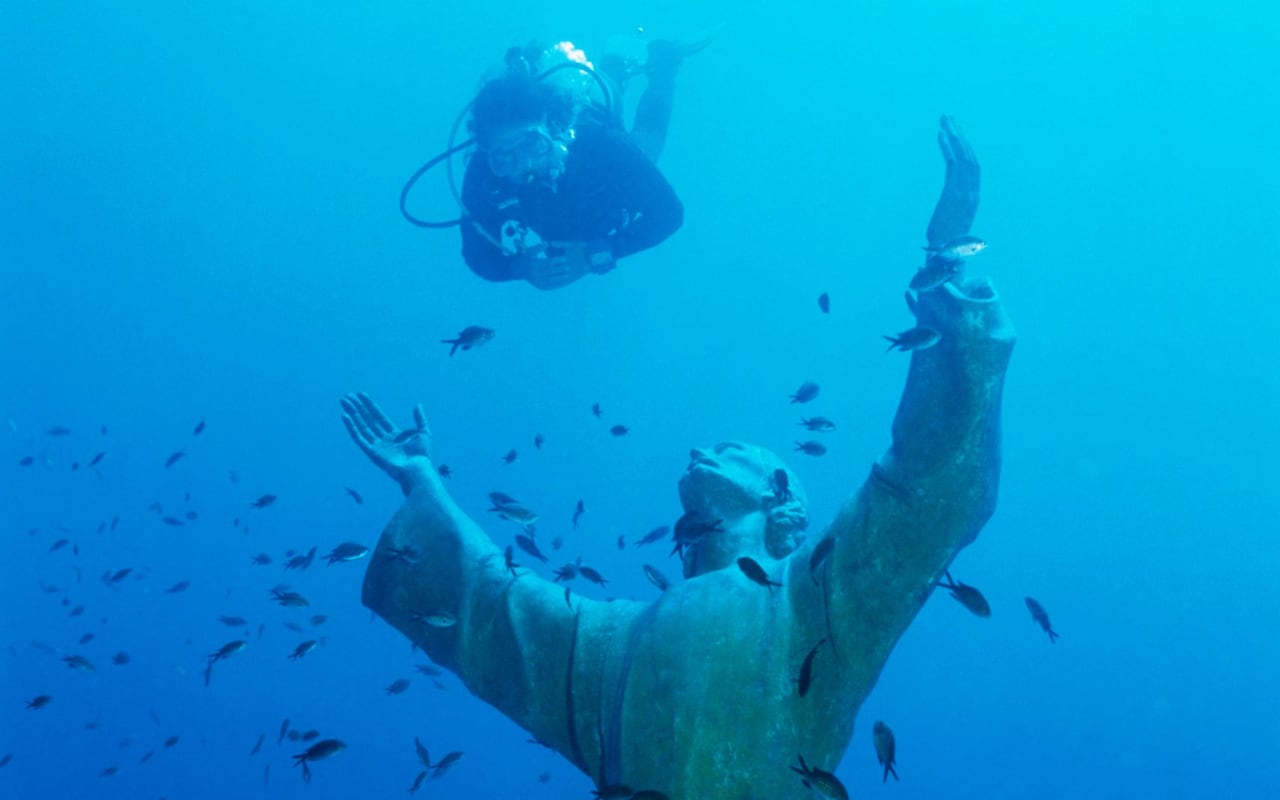 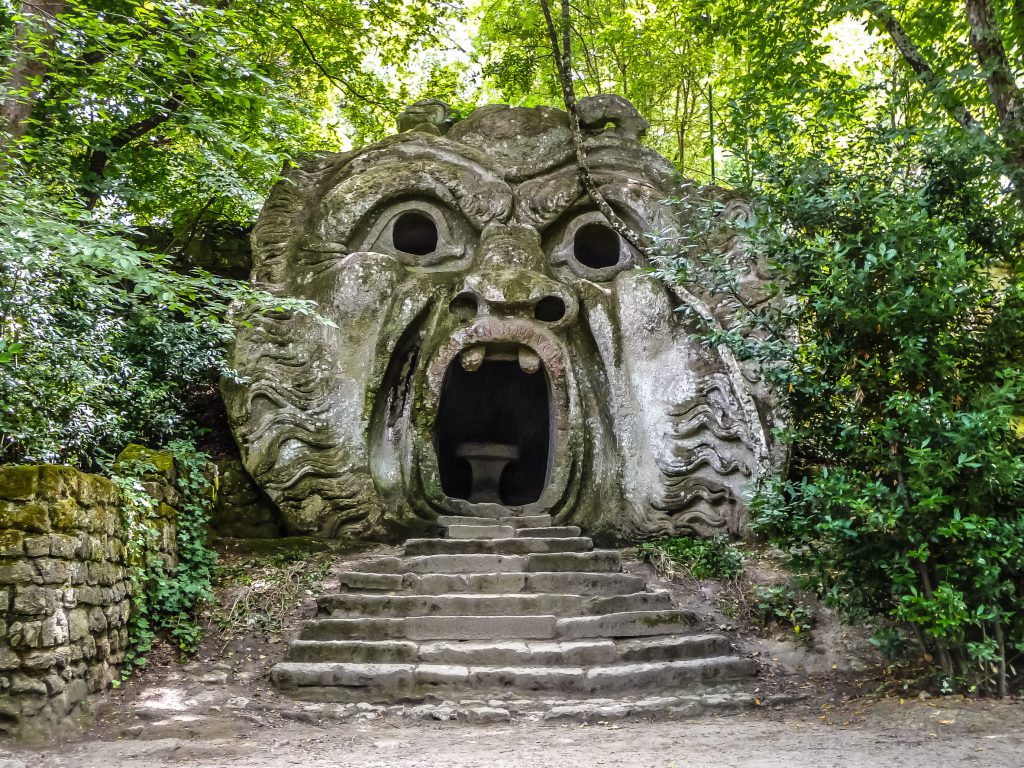 Once a favorite spot of Spanish surrealist artist Salvador Dalí, the nightmare-like garden of Bomarzo was commissioned in the 16th century by the nobleman Pier Francesco Orsini after returning from war. Commonly known as the Park of Monsters, it is thought to be the expression of deep inner turmoil and grief following the premature death of Orsini’s wife.

You can now visit this bizarre garden 40 miles northwest of Rome and step through and around a wide variety of spooky, monstrous and somewhat disturbing sculptures with cryptic engravings.

Instead of the elegant archways and romantic fountains of a beautiful Italian Renaissance garden, here you will find mythical creatures, grotesque giants, sea monsters, dragons, giant turtles and the so-called Mouth Of Hell, pictured above. The erratic layout and lack of a set route to follow adds to its other-worldly appeal.

The Sunken City of Baia, Campania

In its heyday, the Roman city of Baia, approximately 10 miles west of Naples on the west coast of the Gulf of Pozzuoli, was the hedonist Las Vegas of the Roman Empire. Over the centuries, seismic and hydrothermal activity caused much of the city to sink into the crystal-clear Tyrrhenian Sea, where it still sits today.

Formally designated a marine protected area in 2002, this wonderful underwater archaeological site is truly like no other place. You can see some of its once majestic buildings and amazingly preserved sculptures from a glass-bottomed boat. Local diving centers offer snorkeling and scuba tours which allow you to actually swim amongst the eerie underwater ruins. 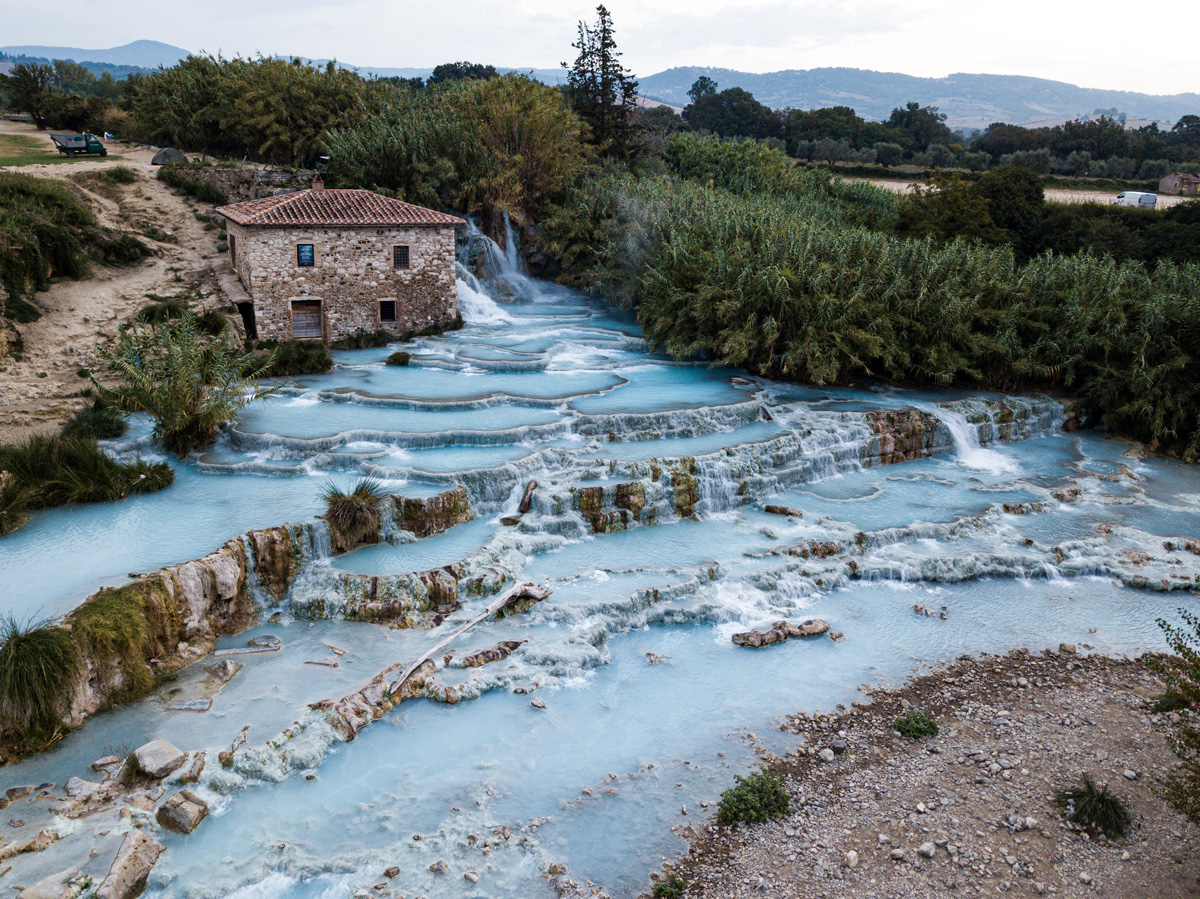 Tuscany is peppered with natural mineral-rich hot springs that have been used since ancient times for their health benefits.

Set amidst the hills of Maremma, in a remote corner of southern Tuscany, the spa town of Saturnia is home to one of the most paradisiacal free bathing areas in Europe. The Cascate del Mulino’s naturally formed travertine rock pools of swirling milky water are one of Italy’s best kept secrets.

The warm sulfurous water is about 37,7° C and its therapeutic properties can treat circulatory problems and skin diseases. In winter, the contrast between the water and air temperature rejuvenates body and mind. 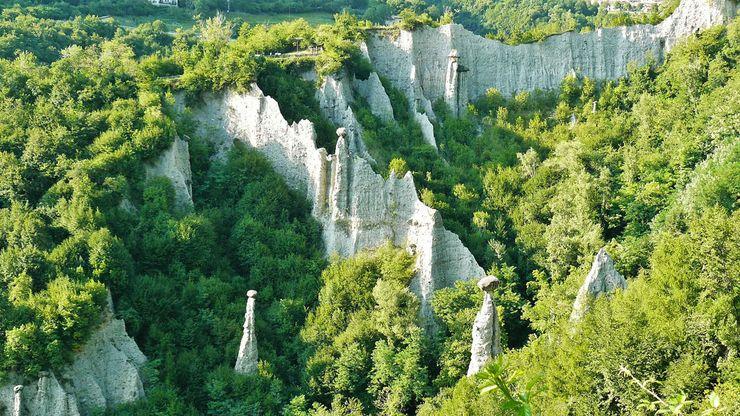 Unlike their more famous Egyptian counterparts, the Pyramids of Zone, in the province of Brescia, are the product of nature, resulting from millennia of erosion and clay deposit patterns.

Over time, wind and rain have washed away layers of clay around the ones held down by boulders in this clay reservoir. The result is an uncanny, surreal landscape of boulders perched atop spindly towers of clay. From the round footpath you can enjoy spellbinding views over Lake Iseo. 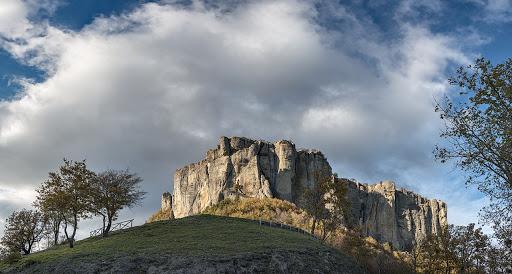 In the beautiful landscape of the Reggiano Apennines, in the province of Reggio Emilia, you will find a 3400-foot-high stone plateau of marl and calcarenite rising out of a mountaintop.

The unique shape of this solitary massif called Pietra di Bismantova (literally, Stone of Bismantova) was mentioned in Dante Alighieri’s Divine Comedy. Like the Purgatory Hill, Bismantova reaches for the sky. Dante Alighieri refers to this enormous cylindrical rock formation by equating scaling your way out of Purgatory with climbing the cliffs of Bismantova. This is the perfect place to hike and reflect on your destiny. 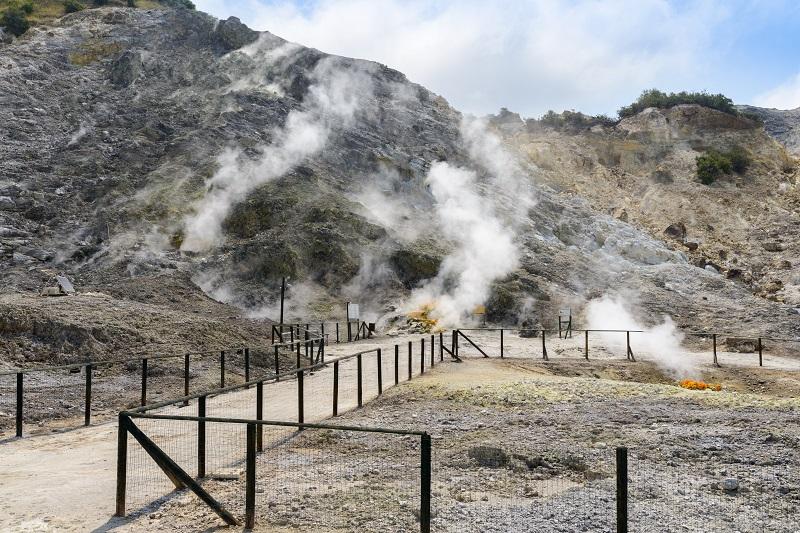 The most famous volcano in Italy, Mount Vesuvius frames the Gulf of Naples in Campania. And there is a potentially more deadly threat just to the west of the city of Naples. Declared a regional park in 2003, the slumbering Campi Flegrei volcano, Phlegraean Fields in English, is deemed to be the largest supervolcano in Europe.

Here stands the so-called Solfatara of Pozzuoli, a shallow volcanic crater still emitting sulfuric fumes and jets of steam. The Solfatara, whose name comes from the Latin Sulpha terra (literally, land of sulfur), is one of the forty craters and volcanic vents that make up the Campi Flegrei supervolcano’s caldera.

In Roman times, this steamy corner of Campania was believed to be the home of the god of fire, Vulcan. 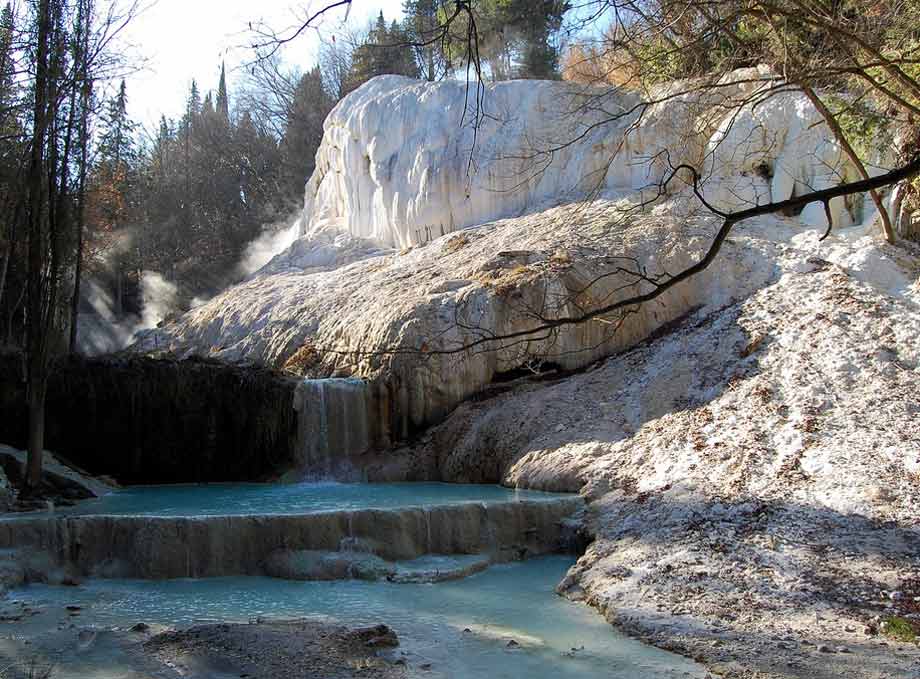 Hiking through the woods of the now dormant volcano of Mount Amiata, in southern Tuscany, you will get to the secluded mineral-rich hot springs at San Filippo. The so-called Fosso Bianco (literally, white ditch) is set among some enormous white mineral formations that remind of a white whale.

San Filippo has natural pools and waterfalls of frothy, hot, steaming water which gurgles out of the ground at 52° C year-round. The warm soothing waters contain calcium, magnesium and sulfur bicarbonate. Access to the hot springs is free.

It is probably feeling like a great time to book a trip to Italy. Are your bags packed yet?