Confused about the difference between panettone, pandoro, pandolce and panforte? We have put together the ultimate guide to Italian desserts.

Indulge your sweet tooth with these delicious treats. 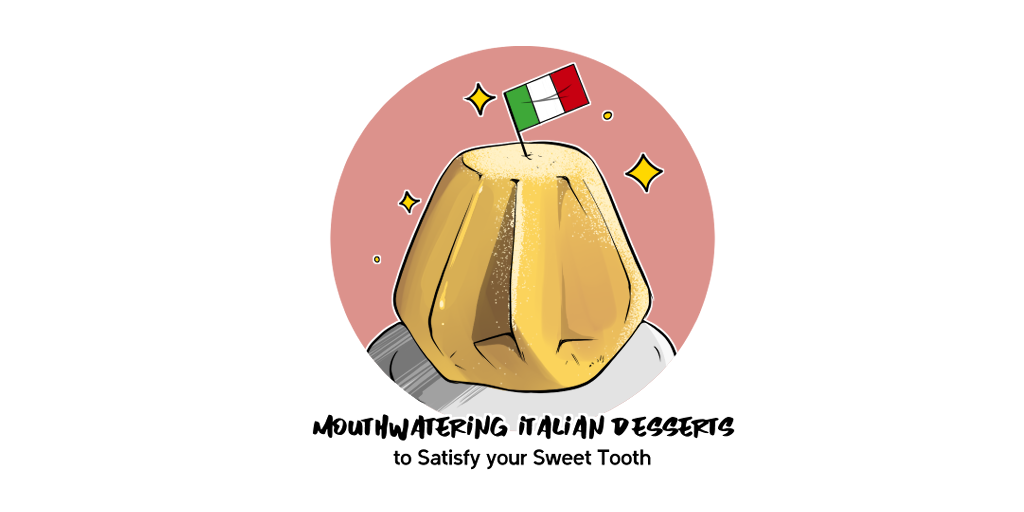 Tube-shaped shells made with fried pastry dough stuffed with sweetened sheep ricotta, Sicilian cannoli are one of Italy’s most famous desserts. Apparently, they evolved during Sicily’s Arab occupation.

Traditionally, the dough is wrapped around a cane to form a tube, which is then fried in lard and filled with sheep ricotta and candied fruit or chocolate chips.

The creamy, tangy flavor of sheep ricotta cheese is softened by the exotic fragrance of candied fruit, and the crunchiness of the crispy pastry shell brings out this delicious symphony of textures and flavors.

The traditional Sicilian-style cannolo has a strong identity-defining power. Italian pastry shops and bakeries all over the world make of its presence a symbol of Italianness. 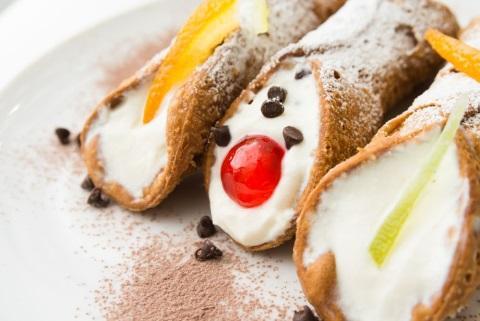 Does this delightfully creamy, coffee-flavored classic Italian dessert need an explanation? A rich and creamy pudding-like treat that melts in your mouth, tiramisù is one of the great classics of Italian cuisine.

It is made of sweet sponge biscuits called Savoiardi drenched in espresso, covered with a whipped mixture of mascarpone cream, sugar and egg whites, and flavored with cocoa powder. My tip for you: don’t sprinkle on the cocoa powder until you are ready to serve. It can soak in, otherwise, and mar the taste.

Literally meaning “carry (or pick) me up”, tiramisù is one of the simplest yet most delicious coffee-infused desserts to make. 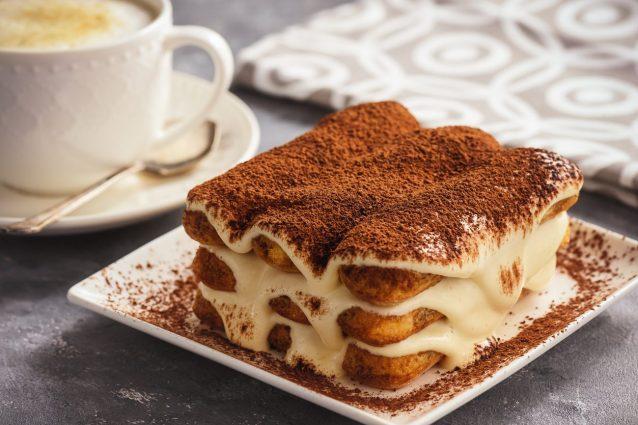 A classic egg white-based nougat holiday candy with historic roots, torrone is a typical Christmas sweet, scented with honey, packed with toasted almonds, hazelnuts and pistachios, and bound together by fluffy egg whites. This soft, chewy, delicious toffee-tough sweet is made with honey, which gives it an appealing but not overwhelming sweetness.

Torrone is most often associated with Cremona, an elegant city in the fertile Po Valley, in Lombardy, where residents say it was first made. The name torrone literally translates as “big tower” and comes from a majestic 14th-century, 367-foot-tall bell tower in Cremona, called the Torrazzo.

Note that torrone can be soft and chewy or hard and crunchy. It can be found widely throughout Italy, and the recipe varies depending on which region you are in. 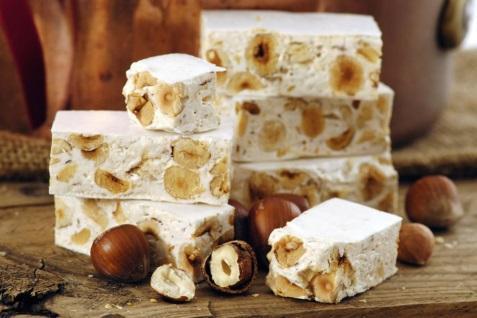 Panettone is a sweet, cylindrical loaf of bread-like cake studded with raisins and citron or dried fruit.

Moist and rich, with a soft, webby crumb, dome-shaped panettone originated in the city of Milan, in Lombardy, and has become a typical Christmas cake throughout the whole Bel Paese. 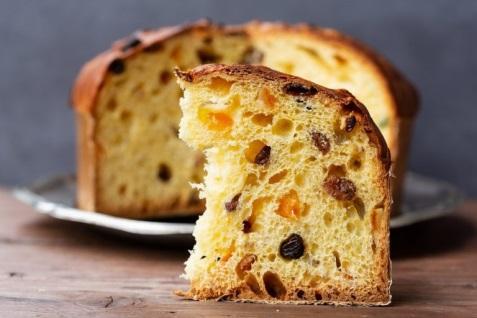 Star-shaped pandoro, meaning golden bread, is often called the “Everest of baking” for its mountainous size. It actually looks like a craggy mountain topped with powdered sugar.

Unlike fruit-studded panettone, it doesn’t contain raisins or dried fruit, and originated in the romantic city of Verona, in northeast Italy. 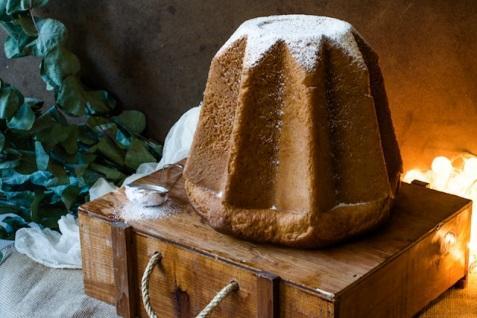 The Tuscan alternative to panettone and pandoro, the thick, nut-rich panforte is a solid wedge of dried fruits, heavy with spice and glued together with melted sugar. Coriander, nutmeg, cloves and cinnamon are common ingredients.

Panforte means “strong bread”, because of its spicy flavor. Dating to the 13th century, it is a specialty of the famous Tuscan hill town of Siena. 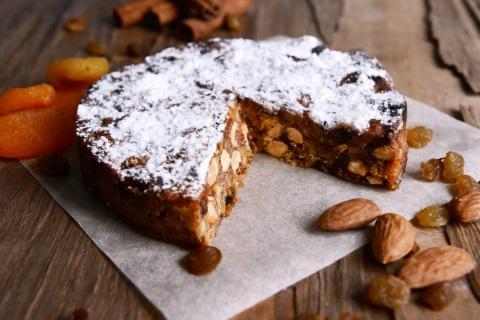 Pandolce is a traditional bread-cake from northern Italy, originating from the glorious port city of Genoa. Pandolce genovese can be alto (high) or basso (low), and both types are studded with pine nuts, raisins and candied citrus.

Pandolce is believed to have roots in Persia, but, according to local folklore, it became firmly linked to the Italian city of Genoa when the famous pirate-turned-admiral Andrea Doria ordered a competition to produce a new version of the cake that could stay fresh for extended periods of time. 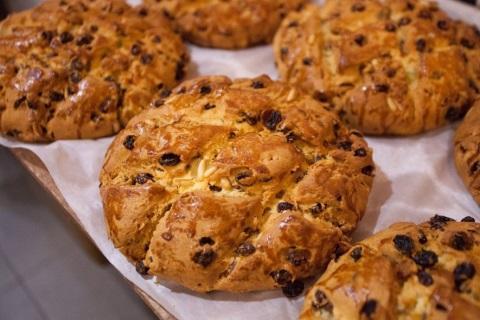 This cake is shaped to form a wreath. Its colorful candied fruit decorations make it a perfect centerpiece for any Christmas table. Still made by hand, buccellato is widely available in bakeries and specialist pastry shops all over Sicily during the winter holidays.

Because its ingredients were rather expensive, this sweet shortcrust pastry was once seen as a status symbol to give or serve. 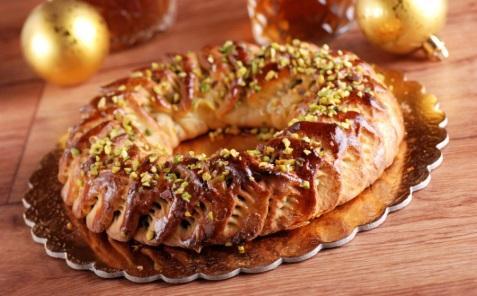 A typical holiday dessert in Calabria, the “toe” of Italy’s boot-shaped peninsula, pignolata are tiny, crisp-fried dough balls soaked in honey and decorated with candy sprinkles.

Also called pignocata, pagnucatta and struffoli in Naples, these sweet and gooey balls are usually enjoyed during Carnival celebrations and at Christmas or Easter time. 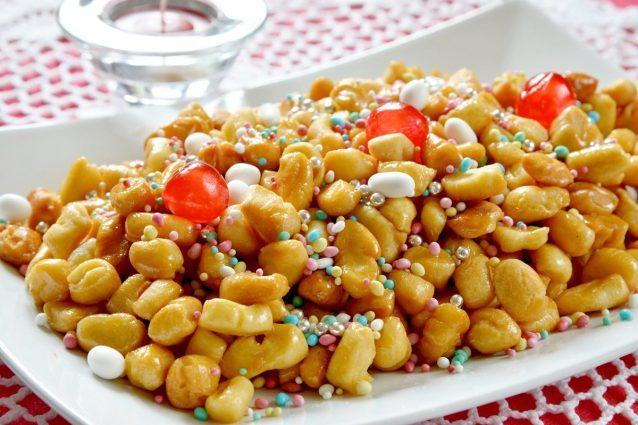 Crisp cookies made from almond paste, amaretti originated in the lagoon city of Venice during the Renaissance.

Made with sugar and egg whites, amaretti biscuits (literally: little bitter ones) – not to be confused with amaretto, an almond-flavored liqueur – go perfectly with a hot cup of tea or coffee. They can be crunchy or chewy depending on which region of Italy you are in. 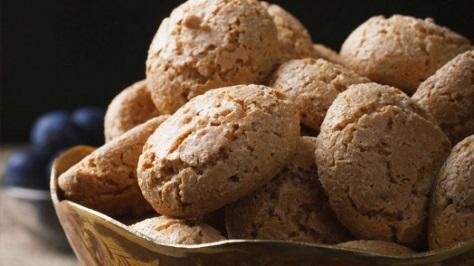 Rich yet light, zabaione is a warm, boozy, egg-y cloud of deliciousness, made with caster sugar, egg yolks and sweet white wine or dry Marsala. Most recipes call for Marsala, others for cognac, Vin Santo wine, rum or even grappa.

Considered one of Italy’s best gifts to mankind, zabaione is great served over fruit in a glass, on a bed of crushed amaretti or as a hot shot of pure festive joy. Yes, it can sometimes be served as a beverage.

An ancient Venetian specialty, zabaione is very easy to make, and honey can be used instead of sugar, if preferred. 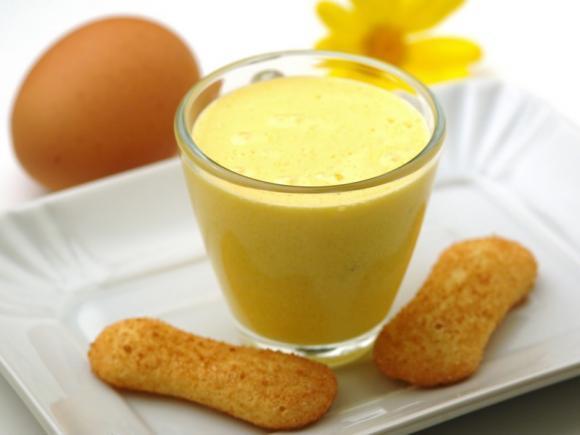 A traditional Easter cake, colomba is one of the best known culinary symbols of Easter in Italy. Light, fluffy and shaped like a dove to symbolize peace, it is an enriched sweet bread made with candied citrus peel, and topped with almonds and icing.

Colomba di Pasqua is traditionally served after an Easter meal with a glass of sparkling Prosecco. 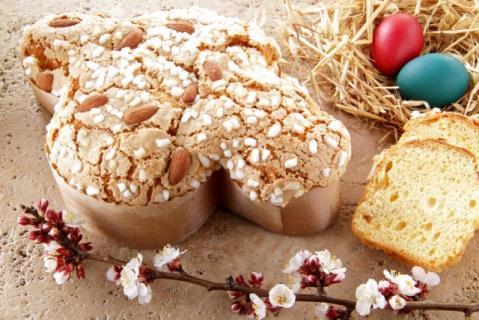 Travel to Apulia, the heel of the Italian boot, and you will find cartellate, also known as carteddhate. They are little honey-dipped nests of fried-dough ribbons. In the original recipe, these sweet pastries were soaked in reduced wine must. 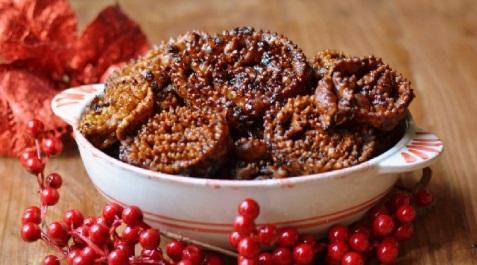 Usually sold by the weight, brutti ma buoni, which literally translates to “ugly but good”, are unevenly-shaped, lumpy-looking nut cookies with a crispy outside and a chewy center. Bumpy and craggy, they are aptly named and unquestionably delicious. You’ll love them, trust me!

These crisp and nutty cookies are credited to Costantino Veniani, who first made them in 1878 at his pastry shop in Gavirate, in the province of Varese, in Lombardy, about 40 miles northwest of Milan. 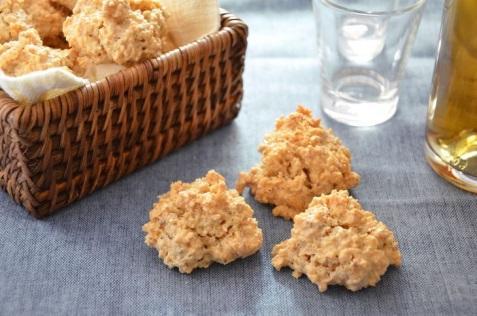 With its crumbly texture and simple yet irresistible flavor, sbrisolona (literally: big crumbly one) is a traditional almond cake from northern Italy, originating from the charming city of Mantua.

Also known as frigolotta, it is made of roughly chopped almonds, hazelnuts, flour, polenta, sugar, lard, grated lemon peel and a lightly beaten egg yolk to keep the sandy, coarse crumbs bound together while baking. The pastry dough should not be mixed too finely.

Sbrisolona works well with a cup of coffee or dipped into a mug of caffelatte. 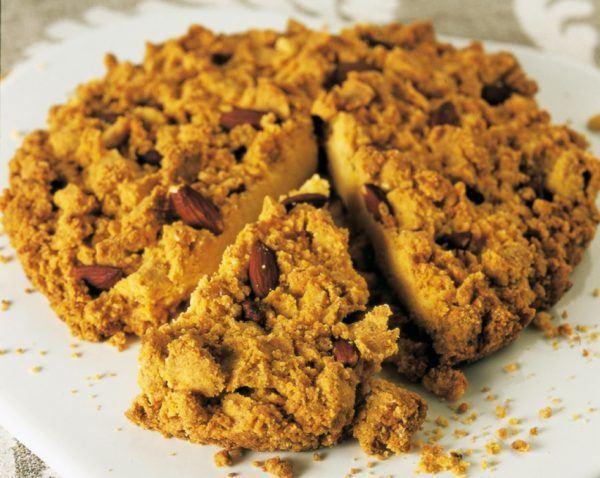 A typical sweet from Rome, maritozzo is a bun sliced and filled with raisins, pine nuts and fluffy, sweet whipped cream that melts in your mouth.

Also known as maritello or panmarito, this dough-based bun used to be offered in the Middle Ages by husbands-to-be to their future wives on Valentine’s Day, and usually hid an engagement ring inside. 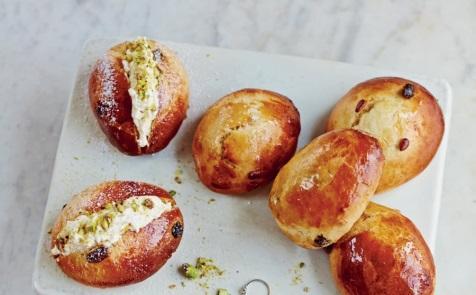 A popular Carnival treat throughout Italy, chiacchiere are delicious, crispy, deep-fried pastries made of thin strips of fried dough sprinkled with powdered sugar.

They are called chiacchiere (chatter) in Sicily, and go by different names depending on which region of Italy you are in, including:

As mentioned previously, they are usually dusted with powdered sugar, or drizzled with melted chocolate. 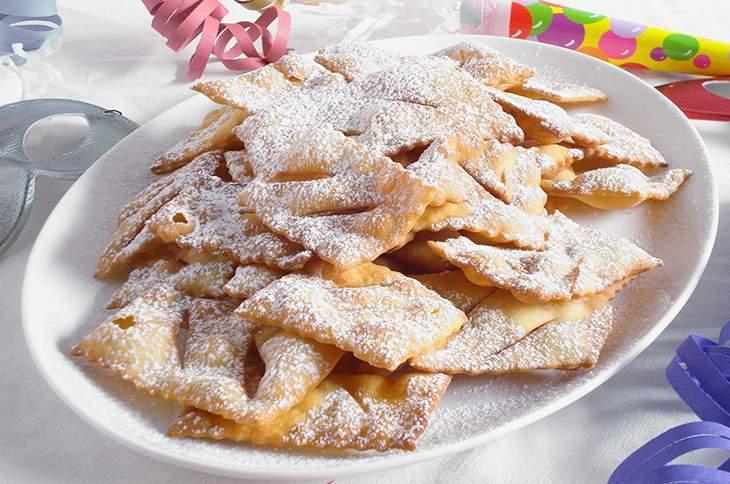 A molded, chilled, go-to dessert in the summer months, panna cotta is “cooked cream” thickened with gelatin, sugar and various flavors, such as vanilla or fruit. The perfect panna cotta should have just enough gelatin that it quivers when you touch it.

A creamy, silky panna cotta is super easy to make, and looks and tastes wonderful with ripe red fruits, such as fresh strawberries, raspberries and sweet cherries. Its light texture and fresh taste make panna cotta ideal to indulge on as a delicious finish to an elegant al fresco dinner party. Some say it originated in the Langhe area of Piedmont, in northern Italy. 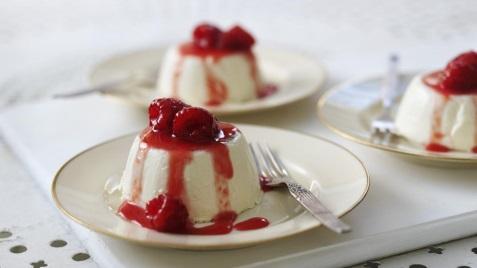 With its typical mushroom shape, an authentic Neapolitan babà is a leavened oven-baked sweet drenched in rum, as tradition dictates, or in Limoncello, a sweet, intensely lemon-flavored liqueur typical of the Amalfi coast. Nothing else: no whipped cream, chocolate or marmalade brushed onto its surface to make it glossier.

The babà is so highly appreciated that it has become an authentic icon of the historic city of Naples, in southern Italy. Go try one if you haven’t already. 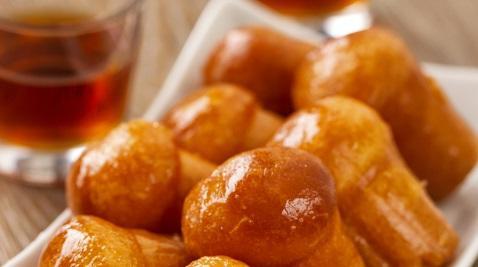 Similar to a cheesecake, Neapolitan pastiera is a wood-oven-baked shortcrust pie, with a filling of ricotta cheese, cooked wheat, pine nuts, custard and orange flower water.

Traditionally, this wheat cake is cooked no later than Good Friday to allow plenty of time for the ingredients to infuse before Easter Sunday. 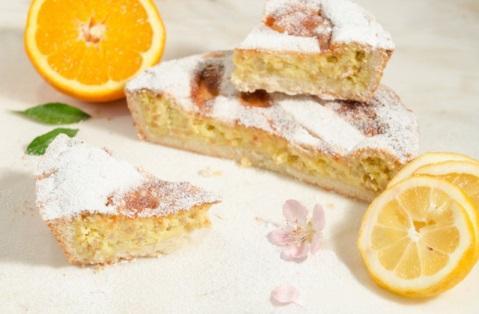 The sweetest of sweet desserts, the Sicilian cassata is a sponge-cake layered with creamy sweetened ricotta. Originally connected to Easter, it is now enjoyed during the entire year. Wrapped in marzipan, covered with icing and decorated with colorful candied fruits, the classic Sicilian cassata is a sight to behold. It is an especially elaborate cake, even for those with a sweet tooth. 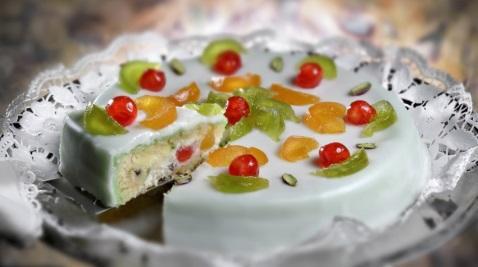 The miniature, snack version of the bigger Sicilian cassata, cassatine are eye-catching dessert delights. They are little cakes filled with chocolate and ricotta cheese, wrapped in marzipan, covered with icing, and topped with a candied cherry. 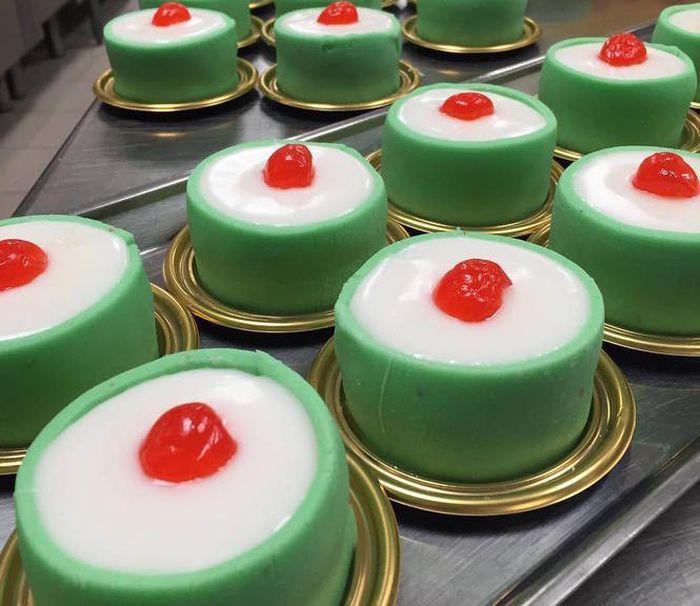 Very easy to make, castagnaccio originally represented the meal of poor farmers who only had chestnuts, known as castagne in Italian, available in their rural areas. Cheap and nutritious, chestnuts were boiled, roasted, dried and made into flour.

This plain, savory cake is a wonderful way to end a Tuscan meal throughout the colder months. 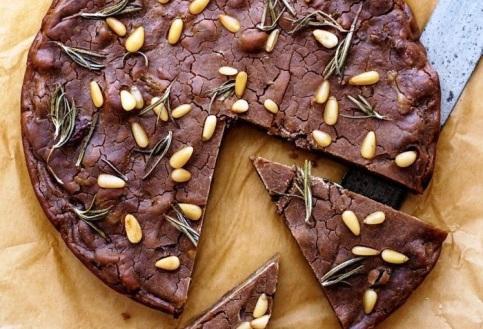 A semi-frozen dessert similar to an American snow cone, granita is a dense mixture of sugar, water and ice blended with toasted almonds, crushed pistachios and fresh fruit.

Considered as the traditional Sicilian summer breakfast, granita and a fresh brioche are the perfect match. The real Sicilian granita usually comes with whipped cream on top. The flavoring is added to the water first, and then the mix gets frozen.

Noto, a pure gem of Baroque art on the southeastern coast of Sicily, serves up some of the best artisanal granita in sun-kissed Sicily. 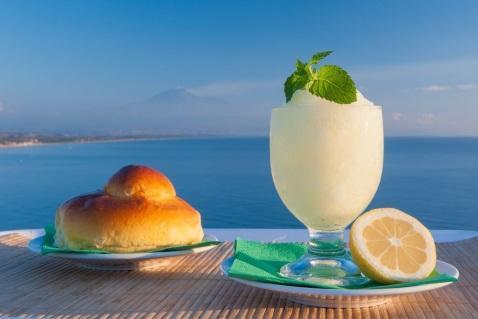 No dessert list would be complete without this renowned Italian-style frozen treat. Have you ever eaten an artisanal gelato in a local, old school gelateria in sunny Italy? The difference between industrially made ice cream and a gorgeously chilly scoop of authentic gelato is more than apparent.

The basis of a traditional Italian gelato is a creamy custard made of milk and eggs, enriched with milk powder. Italian-style gelato is much denser and contains less fat and air than commercial ice cream.

Its origin can be traced to the Italian Renaissance, when the Medici family of Florence sponsored a frozen dessert contest. 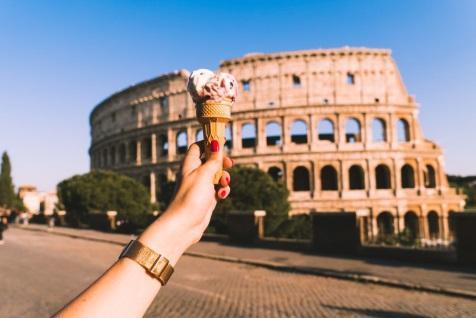 What’s your favorite Italian dessert? Let us know in the comments section!