Italy and swearing just belong together. When it comes to curse words (parolacce) and insults, no one does it quite like the Italians.

One of the most fascinating things about swearing in Italian is that the vocabulary is so vast, rich and colorful. 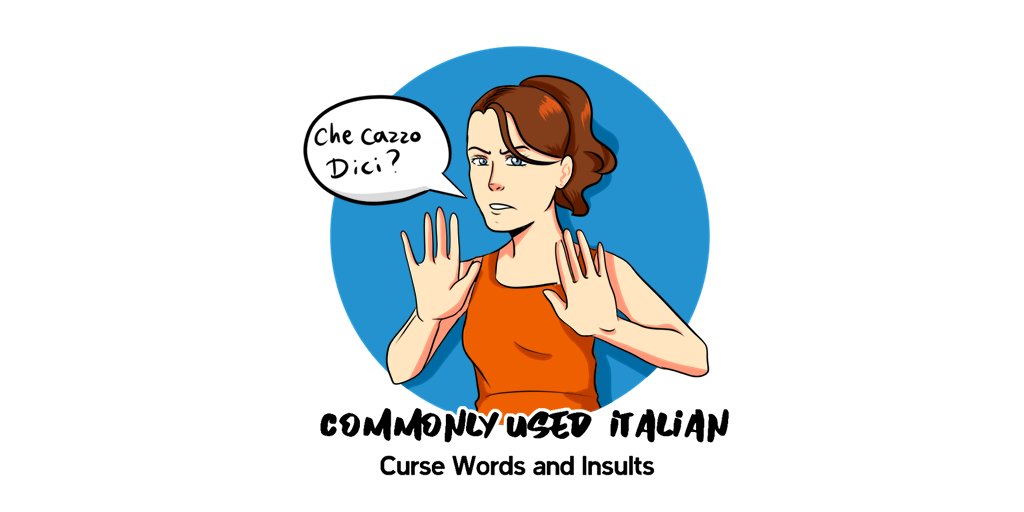 Here is a guide to the insults and bad words you will need when arguing like an Italian. Even if you don’t use them, knowing these swear words will allow you to fully understand what is being said around you, since you will surely come across them often when in Italy.

In Italian, the word cazzo literally means “dick”, and is commonly used not only to express anger, but also as an exclamation of surprise, disappointment or even appreciation. It is extremely common, and mastering its usage is crucial to better relate to those around you.

It can be added to a sentence, or be used as an exclamation. You can use cazzo, pronounced /kattso/, in combination with Italian question words, to add sass to what you are saying. For example:

We also use “’sto cazzo” (literally: this dick) to emphasize stuff in normal conversations.

The term minchia, pronounced /meenkia/, has the exact same meaning and usage as cazzo, but note that it is a feminine noun. It originates from the Sicilian dialect, and is now common anywhere in Italy. Minchia and cazzo can be used interchangeably.

The mild form of cazzo is cavolo, which means cabbage. Cavolo is inoffensive and harmless enough that even children say it.

Others substitutes for the vulgar expression cazzo are:

Note that cacchio and cazzarola retain a teeny tiny little dose of cursing.

Vaffanculo – F*ck off, f*ck you, go f*ck yourself

Vaffanculo is probably the dirtiest, nastiest and most famous curse word of all. You are likely to really make someone angry when using this expression.

Consider this the Italian version of “fuck off”, “fuck you” and “screw you”. It is used to invite someone to leave, or to stop doing something. The word vaffanculo, or fanculo, is the contract form of the phrase “vai a fare in culo”, which literally means “go fuck someone in the ass”.

There are different ways to say fuck off in Italian. You may happen to hear:

All the above examples are equivalent to vaffanculo.

Here are some clean alternatives:

If you want to be extra insulting, though, curse someone’s dead loved ones by saying vaffanculo a chi t’è morto, which literally means “go fuck your dead family members”. This expression is used especially in the south of Italy.

In Italy, when something truly pisses us off, we yell “porca puttana”, which literally translates to “pig slut”, and is used in a similar way as “bloody hell”. A great way to express anger at stubbing your toe or dealing with traffic, “porca puttana” is a colorful way to say “dammit” or “damn”.

Instead of puttana you can use a synonym, such as troia, zoccola and mignotta, which all mean “slut”.

If you want to use a clean version, say porca miseria, which means “pig misery/pig poverty”. The word porca (pig, pork) is not very elegant indeed, but it is not so dirty either. Porca miseria is an acceptable expression in Italian.

How comprehensive of a list of swear words could this be without some way to say “shit” in Italian? Merda is used in exactly the same way as “shit” in English.

Accidenti, accidentaccio, perbacco, accipicchia and acciderbole are more polite alternatives. These expressions sound a little old-fashioned and don’t really have a meaning. Use them to avoid saying “merda”. For example:

Mi hai rotto i coglioni literally means “you have cracked my balls”. You can replace i coglioni with il cazzo, if you like.

All the above expressions refer to someone being really, really annoying.

Cazzata, minchiata, stronzata and puttanata correspond to bullshit in English, and indicate a lie or something stupid. If you want to use a clean alternative, substitute them with cavolata, stupidaggine or fesseria, which mean nonsense.

Figa means cunt in Italian. It is slang for “vagina”. As an exclamation, it can express anything from surprise to disappointment, frustration and extreme satisfaction.

It is used A LOT in informal, everyday speech as an interjection, without a real meaning. Here in Lombardy, saying figa is like putting the dot at the end of a sentence. It is so common that it is not even perceived as dirty anymore.

As an adjective, figa is very vulgar, yet not necessarily offensive. It actually means sexy, hot and attractive if referring to a woman. If referring to a guy (figo), it means someone really cool, handsome and confident, a stud.

Gnocca, typical Bolognese version of figa, is widely used with the same meaning.

Suca, or succhia, roughly translates to “suck my cock” or “suck my dick”. It is a very raunchy, rude and offensive expression, especially when accompanied by a vulgar hand gesture that mimics the classic head-push during oral sex.

This is not used to ask someone to have an oral intercourse with you, though. Suca is to be used when someone pisses you off, as a way to intimidate, mortify and humiliate them.

Here is a list of insults, ranked in order of offensiveness. Most of the following insults end in -o. Make sure you use the correct ending depending on who you want to insult, and which gender you need to use. Use -o for masculine, and -a for feminine.

In the most basic sense, sfigato means “loser”, and can be used to refer to someone who is uncool, dorky, clumsy, hapless or very unlucky.

Faccia di culo literally means that your face looks like an ass. Don’t take offence, though, because in Italian it is not as bad as it sounds. If someone has a faccia da culo, or la faccia come il culo, it actually means that they have a lot of nerve and are very direct.

It doesn’t change according to gender.

Rincoglionirsi literally means to become senile. Rincoglionito and its clean synonyms rimbambito, stordito and suonato are used to refer to someone stupid or contemptibly absent-minded, with their head in the clouds. For example:

Rompicoglioni corresponds to “ballbuster”, “ball breaker” and “pain in the ass” in English. It indicates someone that bothers you, or annoys you.

Clean alternatives are rompiscatole, literally box breaker, and spina nel fianco, which has its almost literal equivalent in “a thorn in my side”. Rompicoglioni is invariable. For example:

Cagacazzo comes from the abovementioned expression “mi hai cagato il cazzo”, and refers to someone who is being really irritating and annoying. It is invariable.

Consider morto di figa the Italian version of calling someone a poonhound or cunt-struck. It refers to an heterosexual man with strong sexual desires, who really enjoys the pursuit of poon and can’t get enough poontang. For example:

Segaiolo has its almost literal equivalent in the English term “wanker”, literally “one who masturbates”. It is a mildly offensive insult, used to refer to a very unpleasant man.

Leccaculo literally means “ass licker”, and refers to someone who behaves obsequiously not because they are genuinely nice and caring, but for their own advantage, in order to gain favor. It corresponds to “kiss-ass” in English and is invariable.

A softer version is leccapiedi, which means feet licker.

It is also used to say that you suck at something. For example:

A clean alternative is mezza calzetta, which means half sock.

Coglione is, perhaps, the most common insult that Italians of all ages like to use against each other. It literally translates to testicle. Saying that someone is a coglione means that they are inept, stupid, unintelligent and contemptibly naïve.

It corresponds to dumbass, dummy and idiot in English. Softer synonyms include asino (donkey), somaro (donkey) and fessacchiotto (silly).

Cazzone and minchione literally mean big penis, and can be used as direct insults. They are another way to say idiot, dolt and chump in Italian. Remember to change the ending when referring to a female. For example:

If you want to insult someone’s manhood, you could take a homophobic turn with frocio, ricchione, culattone and rottinculo, which are all slurs for gay people. A slightly milder alternative is finocchio, which means fennel, but has come to mean homo.

Cornuto literally means horned, and refers to a man whose wife is cheating on him. It is extremely offensive in southern Italy. Expect to get a lot of anger back if you say it.

A fairly common Italian insult is stronzo, which corresponds to “asshole” in English. It is widely used to indicate that somebody is a bad, cruel, despicable and detestable person. Stronza, feminine, corresponds to “bitch”.

Stronzo is turd in English, which means piece of excrement. If you want to make it even stronger, say stronzo malcagato, which literally translates to “badly shitted turd”.

The best thing to do if you want to avoid saying stronzo is to use brutta persona (bad person) or something more specific, like insensibile (insensitive). For example:

Clean, childish alternatives are struzzo (ostrich) and strombolo, which I think comes from Stromboli, a volcanic island off the north coast of Sicily, in the Tyrrhenian Sea.

Pezzo di merda corresponds to “piece of shit”, and its meaning is similar to stronzo. It indicates an awful, horrible, deplorable person.

If you ever come to Italy, you will hear the word cazzo a lot. Testa di cazzo and testa di minchia correspond to “dickhead”, and are commonly used to indicate an unkind, unpleasant and bad-mannered person.

As mentioned previously, a clean version of cazzo is cavolo (cabbage). Replace testa di cazzo with testa di cavolo, then, if you want to sound less rude.

As was mentioned earlier, if you aim to be extra offensive, target family members. Figlio di puttana is a strong, highly offensive insult, and means son of a whore. Again, you can replace puttana with a synonym, like troia and mignotta. You choose.

Italians are very touchy about mothers, and this is the most insulting you can go. Use it with caution. Thanks God, “motherfucker” doesn’t have an exact equivalent in Italian.

The most controversial Italian swears revolve around religion. In Italy, blasphemous expressions shock and offend way more than vulgar and sexual swear words. Cursing God, Jesus, the Virgin Mary, the apostles and all the saints is considered especially taboo in Italy.

In the regions of Veneto and Tuscany, blasphemous profanity mix with ordinary swear words without causing much offence. In Veneto in particular, blasphemy has become a stereotype. But this is not the case in the rest of Italy, especially in the South.

There you go! I hope that these Italian curse words have made you laugh.

Remember that swearing may significantly vary from region to region, and even from province to province in Italy. In this post, I have mainly focused on swearwords and insults that are commonly used in standard Italian.