How to Ask Questions in Italian

A question is a sentence used to find out information, as opposed to sentences that make a statement, express an exclamation or deliver a command. Asking questions in Italian is simpler than in English and it is just a matter of intonation.

In this lesson, we will show you how to ask questions in Italian. Ready? Let’s get right into it! 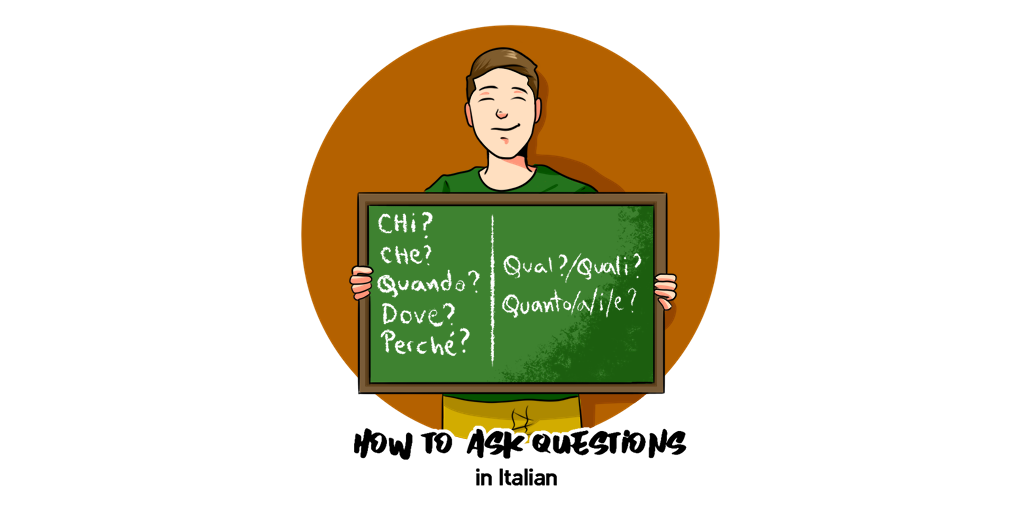 To ask a question in Italian, you just need to add a question mark at the end of the sentence and use the right intonation.

Look at the following examples:

As you can see, the sentence structure remains unchanged and we use the exact same words to ask a question. All you have to do is place a question mark at the end of the sentence and use a rising intonation of your voice.

When asking a question, the pitch of your voice rises toward the end of the phrase, usually on the final word.

Unlike in English, there is no inversion of the subject and predicate. You can place the subject at the end of the phrase, but this is by no means always the case. For example:

In Italian there are three kinds of interrogative clauses:

2. Alternative questions, which give a choice of two or more answers.

3. Rhetorical questions, which are posed only to make a point and are not supposed to be answered.

To ask questions that require more than a yes or no answer, you generally have to use question words, a key piece of figuring out any language. The following are common Italian question words which never change their form:

The following are question words which do sometimes change their form:

In English, question words like what, where and when always come at the beginning of the sentence. Italian interrogatives usually come first in the sentence, but it is not compulsory.

If you want to emphasize what you are asking about, you can put a pronoun or a noun first.

Here are some examples:

Prepositions such as “di”, “con”, and “a” always precede the question words. Unlike in English, a question never ends with a preposition in Italian.

Italian question words, also known as interrogatives, are pretty similar to English. Here is a list.

Pronounced /kee/, chi means “who”, is invariable and refers only to people, either singular or plural. Here are some examples:

Che, cosa and che cosa can be used on their own and are invariable, which means that they have the same form regardless of number and gender of the following nouns. Cosa and che are interchangeable and more frequently used as they are shorter and easier to say.

Here are some sample sentences:

Che cosa and cosa can be combined with the verb essere (to be) and become che cos’ and cos’ when followed by a vowel.

Pronounced /koo-ahn-doh/, quando means “when” and is useful for asking about times and dates. Have a look at these examples to get an idea of how it works:

Pronounced /doh-vay/, dove means “where” and, just like cosa, can be shortened to dov’ when it is followed by a vowel.

The Italian word perché, pronounced /pehr-keh/, is a little tricky, as it means both “why” and “because”. You can usually tell which one it is by listening to the intonation and by the context the word is used in.

Here are some examples which use perché to mean “why”:

Here are some examples of perché used to mean “because”:

Come mai (how come) is a synonym for perché and is a less direct way to ask “why”. Asking perché (why) sounds like you are demanding a justification, whereas come mai (how come) shows that you are interested in knowing the other person’s reasons for doing or not doing something. Come mai invites a longer answer than perché would.

Pronounced /koh-meh/, come is the Italian word for “how”. It is useful for asking about the state of things or the way something happened.

You might be familiar with it from the famous Italian greeting “come stai?”, which translates as “how are you?”.

Just like cosa and dove, come can be shortened to com’ when it is followed by a vowel.

Pronounced /koo-ah-leh/, quale means “which” and agrees in gender and number with the nouns it goes with. Use it to ask for specific information about something or someone.

You use quale with singular nouns to ask “which” or “what”.

If the following word is è (is) or era (was), use qual without adding the apostrophe.

Quale has a plural form: quali. Use quali with plural nouns.

Pronounced /koo-ahn-toh/, quanto means “how much” and changes according to gender and number of the nouns it goes with.

BEWARE: some common questions in Italian don’t begin with the question word you might expect.

Feeling overwhelmed by all these question words? With some practice you will be asking questions in Italian like a pro in no time.

Placed at the end of a sentence, a question tag, also known as question tail, turns a statement into a question and is used for checking information that we think we know is true.

Italian tag questions basically correspond to English question phrases like “aren’t you?”, “isn’t it?”, “didn’t you?”, “don’t they?” and so on.

Add the following phrases to the end of a statement and make your voice go up as you say them:

Take a look at the following examples:

Questions such as “cos’è successo?” (what happened?) or “dove vai?” (where are you going?) are direct questions and can be phrased in a more roundabout way, in order to sound less direct and more polite.

Look at the following examples:

This type of questions are called indirect question.

Asking indirect questions in Italian is easy: all you have to do is add a phrase to the beginning of the direct question, for example you can add “può dirmi” (can you tell me) to the question “cos’è successo?” (what happened?).

Here is a list of expressions that can be used to introduce an indirect question:

There you go. I hope this article was able to shed light on the topic of how to ask questions in Italian. Let's see some of your example sentences in the comments section!