Hidden Spots in Italy to Visit Before the Tourists Discover Them

Planning an Italian holiday but want to avoid the tourist hordes? Then head to one of these amazing, tucked-away destinations.

Crowds flock to the most renowned destinations like Rome, Florence and Venice, but there is a lot more to Italy than the big hits. Here is a list of lesser-known gems really worth uncovering before everyone else does. 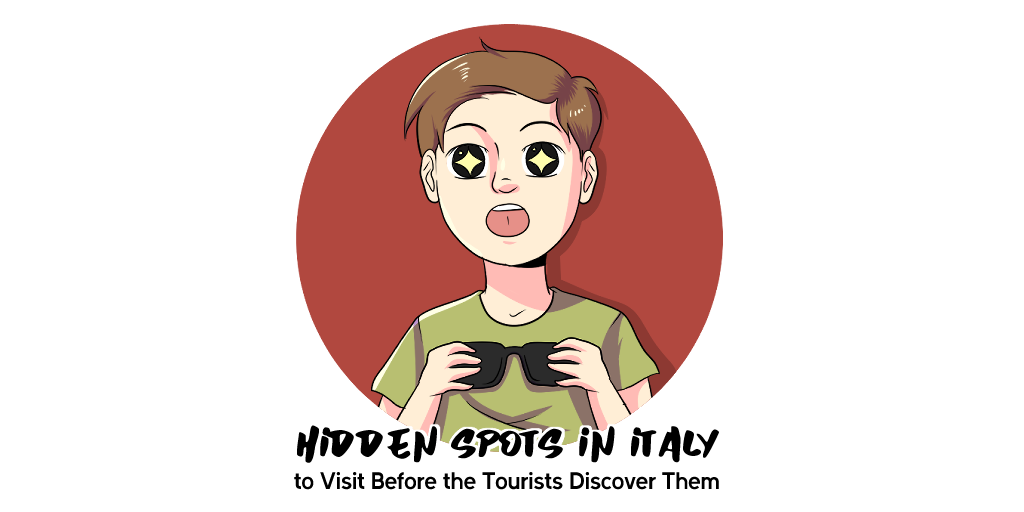 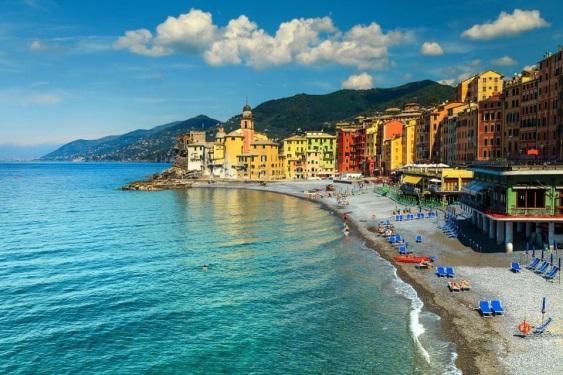 A slow-paced, anchovy-shaped traditional fisherman town with pastel-painted houses, laid-back vibe and small bakeries selling the best focaccia in the world, Camogli is a rare gem in the northwestern region of Liguria.

While glamorous Portofino and the five kaleidoscopic villages of the Cinque Terre steal the show along the Italian Riviera, quieter, unpretentious yet enchanting Camogli retains much more of its traditional fishing village feel.

Stepping into Camogli, located on the Golfo Paradiso in the Riviera di Levante, is like going back in time. Shortened from “case delle mogli” (literally: houses of wives), Camogli got its name from the women who were left behind when their fisherman husbands went out to sea.

Don’t miss a chance to dine at one of the many restaurants along the seafront serving the catch-of-the-day grilled to perfection, while admiring the gorgeously colored buildings embellished with trompe l’oeil. The house colors and decorations once helped the fishermen find the way back to their port. 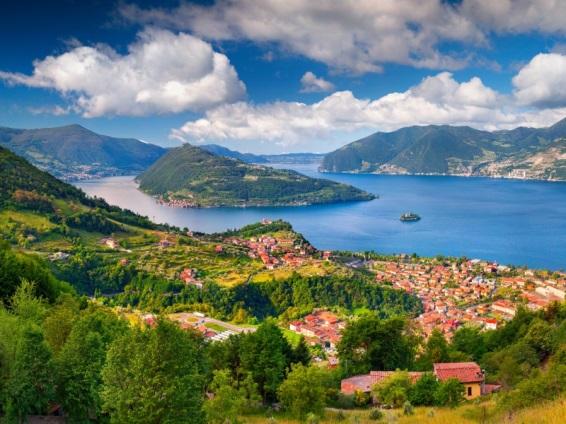 While Lake Como has become a premier destination for luxury travelers and high-profile vacationers, Italy is home to another storybook lake, where you can enjoy spellbinding views with far less crowds.

Nestled in between the cities of Brescia and Bergamo, Italy’s Lake Iseo looks like something out of a fairytale. Smaller, quieter and lesser-known but just as romantic as the more famous lakes Como, Garda and Maggiore, Lake Iseo in Lombardy is an awe-striking sight to behold, surrounded by dense woodlands and soaring mountains.

About a two-hour drive from Milan, it offers exceptional rural beauty, fine wines, Gothic castles, historic walking trails and idyllic islands to explore. It is a playground for outdoor enthusiasts. The largest island lake in Europe, the appropriately named Monte Isola (Mountain Island) is actually the star attraction in this slice of Italy yet to be truly discovered by international travelers. 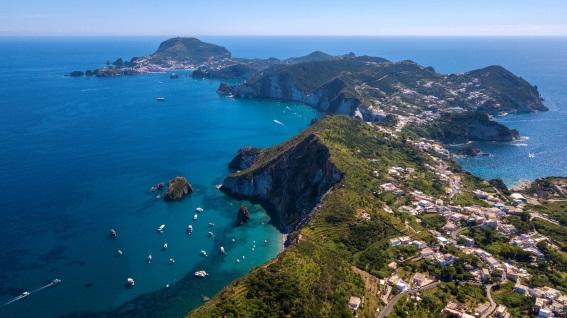 Instead of their better-known neighbor Capri, visit the Pontine Islands, only about 30 miles off the west coast of Italy between Rome and Naples. When Romans need a break, they sail to the Pontine archipelago, a cluster of islands surrounded by turquoise waters.

The larger two, Ventotene and Ponza, shaped like a crescent moon, are inhabited all year round. Ventotene used to be a prison for lustful and disobedient Roman noble women and empresses.

Surrounded by pristine blue waters, Ponza is a labyrinth of blissful beaches, rocky sea grottos and pirates caves, where scuba divers still search for hidden treasures. On Ventotene you will find the ruins of Roman villas, colorful piazzas and excellent scuba-diving opportunities.

A craggy gem with pink coral beaches, Palmarola is a paradise for snorkelers. Dominated by wilderness, Zannone and Santo Stefano are home only to seabirds and wild goats. 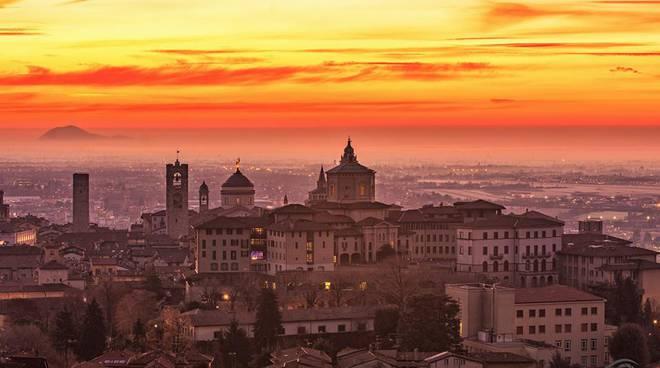 A medieval walled town often ignored by travelers attracted by the fame of Milan, Bergamo is one of Italy’s best-kept secrets.

The perfect escape from the hustle and bustle of modern-day life, the city is split into two different parts. Its centerpiece is the so-called Città Alta, the historic old town elevated above the modern Città Bassa, largely constructed during the 18th-century.

Top highlights of the picturesque city of Bergamo include wandering the historic cobbled lanes and piazzas, experiencing the best of Renaissance architecture and frescoed chapels, and visiting its Venetian walls, granted UNESCO World Heritage status in 2017.

Situated at the foothills of the Alps, about an hour’s drive northeast of Milan, Bergamo has its own international airport, and is far more than a low-cost gateway to northern Italy. It would be a shame to pass it by. 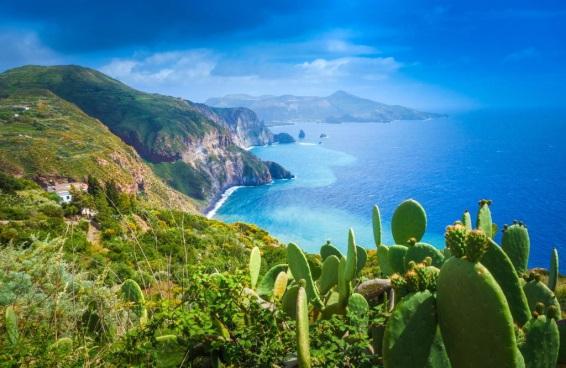 Just off the northern coast of Sicily, the Aeolian archipelago traces a delicate arc in the Tyrrhenian Sea. Listed as a UNESCO World Heritage Site in 2000, the archipelago includes seven volcanic islands and a number of uninhabited islets.

Off Sicily’s northern coast, near the toe of Italy’s boot, Lipari is the biggest of the seven islands, featuring hot springs and mud baths. Panarea is the most fashionable of the Aeolians, while Salina is famous for its starring role in the 1994 Italian film Il Postino.

Home to an active volcano, perfectly cone-shaped Stromboli lies off the north coast of Sicily. With its visibly smoking crater, the island of Vulcano is a must-see too. Don’t miss a chance to ascend to the crater on muleback, and treat your skin to a mud bath in the hot springs by the harbor.

Filicudi, a paradise for trekkers, and Alicudi, a volcanic cone sticking out of the sea, are the most western islands of the Aeolian archipelago.

Skip Venice for the beguiling fishing village of Comacchio, in Italy’s foodie region Emilia-Romagna. This hidden gem is built on more than thirteen islets connected by bridges and crossed by canals.

In the heart of the Po Delta, the delightful little town of Comacchio makes for a pleasant stop with its distinctive 17th-century bridge and bustling fish restaurants. Eel is the area’s specialty. Eels thrive in the nearby lagoons and, as a result, are served fried, grilled, baked or in risotto. Anguilla marinata (marinated eel) is the local specialty. Every October there is even an eel festival, called Sagra dell’Anguilla.

Often referred to as the “Little Venice” of Emilia-Romagna, Comacchio is one of the main centers in the Po Delta Interregional Park, the largest wetland area in Italy. The Comacchio lagoons are also one of the greater flamingo’s favorite nesting grounds in Italy. A colony of pink flamingos is present in the reserve’s salt flats throughout spring and late summer, and you can admire them in the wild. 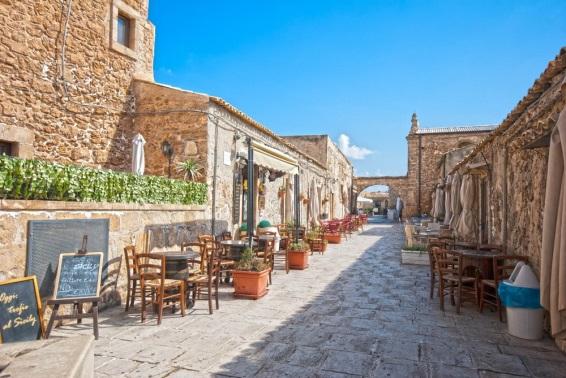 There are several reasons to visit heavenly Sicily, and one of them is definitely Marzamemi, a seaside village in the deep south-east of the island. One of Sicily’s prettiest fishing villages, Marzamemi dates back over 1000 years.

The Arabs gave the village the name Mars al Hamam, meaning Turtle Dove Bay, and built a tuna production factory, known as tonnara, which was to become one of the most important in Sicily.

Just a few miles up the coast from Italy’s southernmost point, Marzamemi is worth visiting at any time of the year, but it really comes into its own in summer. In July it hosts an International Film Festival, during which films are projected on the walls of the buildings surrounding the extremely picturesque Piazza Regina Margherita. 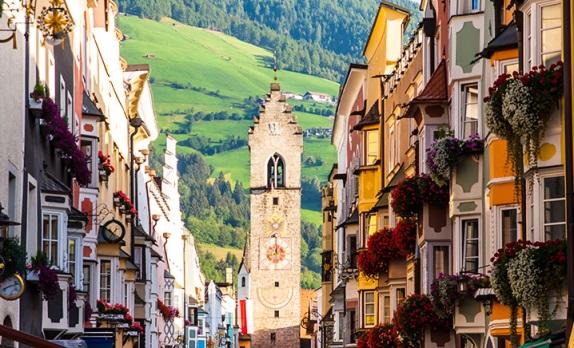 With stunning valleys, fairytale lakes and lush forests nestled among the snow-covered summits of the Dolomites, Trentino-Alto Adige is a breathtaking wonderland, where traditions, food and crafts reflect the area’s hybrid Austro-Italian heritage.

Trento and South Tyrol constitute the region of Trentino-Alto Adige, often overlooked as a travel destination. This part of Italy blends the best of Italian and Austrian culture, and deserves to be put on your travel list for this year.

Vipiteno, also known as Sterzing in this bilingual area, is one of Italy’s northernmost towns. It was actually part of Austria until the end of the First World War. This is an awesome village, where streets are lined with pastel-painted houses decorated with flowers. German is the main language spoken here.

Vipiteno makes a fantastic destination away from the crowds, although the town’s star seems to be rising pretty quickly, especially at Christmas, when a month-long Christmas market draws visitors from the region. It might be best to visit Vipiteno now, before international travelers really do catch on. 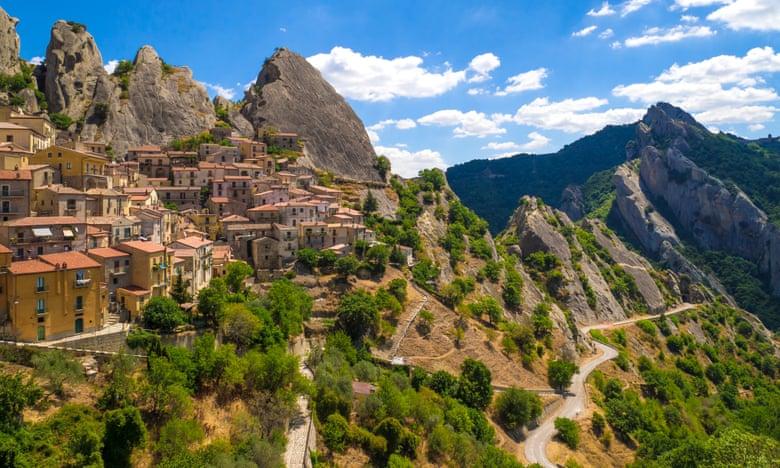 Tourist hordes is not a phrase you are likely to hear in the southern region of Basilicata, the arch and instep of the Italian boot. The high-altitude village of Castelmezzano, in the province of Potenza, dates back to the 5th century B.C. and looks like it’s being swallowed by the mountains.

One of Italy’s most suggestive villages with a typically medieval urban structure, Castelmezzano is a good jumping-off point for visiting Pietrapertosa, Basilicata’s highest village, and the so-called Southern Dolomites, a mountain range dotted with untouched-by-time medieval villages. There are waymarked walking routes in this lovely area, such as Sentiero di Tempa Castello and Sentiero della Croccia.

And there’s more. Castelmezzano has become a hotspot for extreme sports lovers. The most thrilling activity here is the Volo dell’Angelo (Angel Flight). It is a steel cable suspended between Pietrapertosa’s and Castelmezzano’s highest peaks. This adrenaline-filled experience allows you to zipline from one mountain top to another, and feel as if you’re flying over the jagged spires of the imposing Lucan Dolomites. 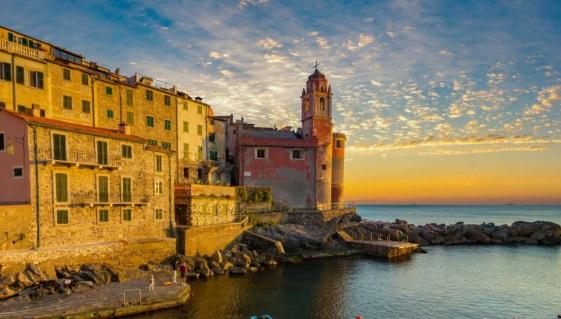 A tiny harbor and snaking cliff-top roads have protected the village of Tellaro, just south of La Spezia, from the wave of tourism that has swallowed other seaside areas in Liguria, such as Portofino and the UNESCO-listed Cinque Terre region.

A jumble of colorful buildings clings to the cliffs of Tellaro, on the easternmost tip of the Gulf of La Spezia, also known as Golfo dei Poeti. This Mediterranean haven has long been a destination for poets and artists, including Lord Byron, D. H. Lawrence and film director Mario Soldati. Visit this hidden gem before its appeal gets undermined by the crowds. 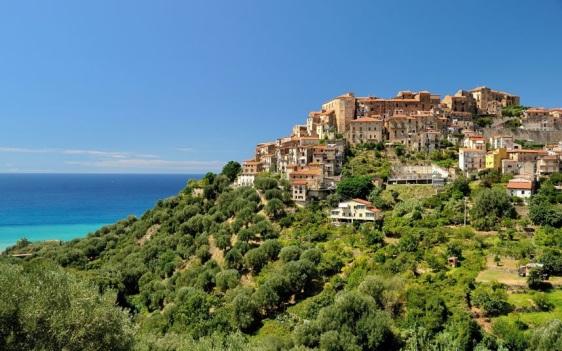 In southern Italy’s unspoilt Cilento region, Pisciotta sits on a hill just back from its seaside frazione, Marina di Pisciotta, a thin scatter of fishermen’s houses and restaurants strung out along the edge of a tiny fishing port. A secret that locals have kept to themselves, this is a place of narrow alleyways, small piazzas and pastel-hued houses.

A 10-minute walk from the town brings you down to the picturesque fishing village of Marina di Pisciotta, famous for keeping centuries-old fishing techniques alive. You can even go out with the fishermen at night, and dine with them on the catch. 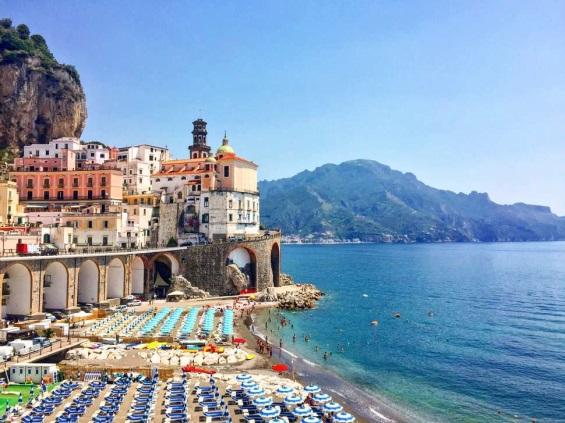 Designated a UNESCO World Heritage Site in 1997, the Amalfi Coast is one of the most alluring destinations in the Mediterranean. Instead of tourist magnets like Positano, Amalfi, Maiori and Minori, visit Atrani, a less-trafficked breath of fresh air in the province of Salerno.

Here you will find tiers of colored houses, marvelous Baroque churches and winding cobblestone staircases leading to hidden chapels from the beach. Imagine an astoundingly beautiful cliff-side town that is small enough to feel cozy, yet big enough to be exciting. Stroll along the quiet fishing port, and enjoy a leisurely lunch and a glass of tasty local wine in the central square.

Forget the holiday crowds. This corner of Veneto is one of northern Italy’s best kept secrets. Surrounded by acres of olive groves, Malcesine sits on Lake Garda’s bewitching eastern shore, at the feet of the towering Scaliger Castle, its most striking feature.

Its steep cobbled lanes lined with artisan shops are crammed between the cobalt-blue lake waters, the historical Palazzo dei Capitani and the massive Monte Baldo behind. Silence rules in this fairytale village in the Province of Verona, the perfect place for your summer staycation.

So, there you have it, our alternative guide to Italy without the crowds. Can you think of any other hidden gems that should be added to this list? Share in the comments!