Many foreigners dream of the Italian life, yet get quite a shock when they visit the Bel Paese for the first time. From not tipping to gesturing a lot while talking, we have rounded up ten things Italians do that make first-time foreign visitors feel awkward. 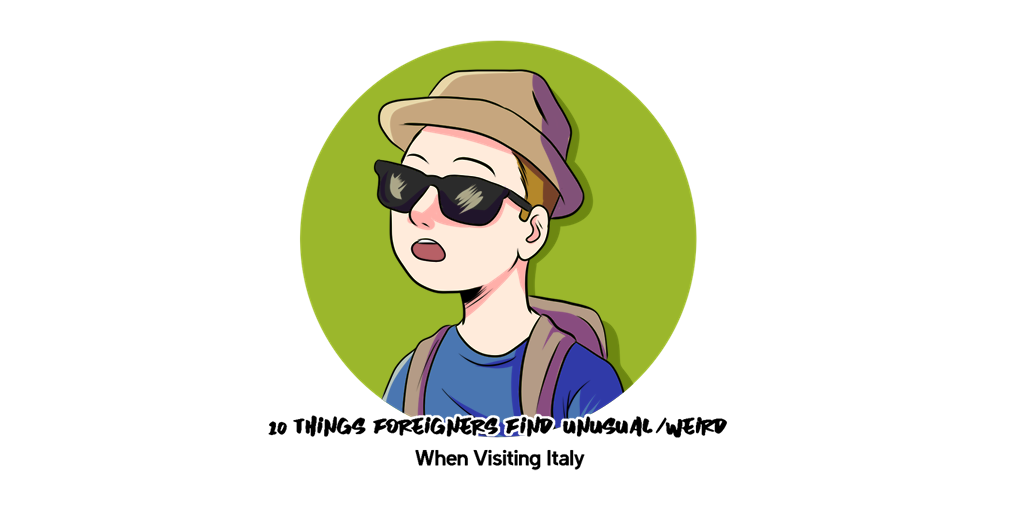 Italians have been always ranked as Europe’s most reckless drivers. Naples, in particular, is infamous for having the worst drivers in Italy. The problem? A blatant disregard for the rules and a heavy dose of impatience.

Be ready to get beeped at, and make sure you are capable enough to drive along with the aggressive Italian drivers. Yes, they like to drive fast, and will sometimes ignore red lights and stop signs, weave through traffic without indicating, cut corners, switch lanes hastily, flash headlights, tailgate, and blast their horns. A lot. If these things scare you, forget about renting a car in Italy.

Spaghetti and meatballs is an Italo-American dish consisting of meatballs soaked in tomato sauce over a pile of spaghetti. It is, perhaps, the most famous “Italian” food outside of Italy. Even Disney’s “Lady and the Tramp” had their first kiss over spaghetti-and-meatballs served up by a stereotypical mustachioed Italian cook.

Although it can be found in red-and-white tablecloth spots across the world, you will not find a dish called “spaghetti with meatballs” if you go to Italy. It is actually not an authentic Italian dish. It is 100% made in the USA. Don’t order it!

In Italy, meatballs (polpette in Italian) are usually served on their own as a secondo (second course), and pasta as a primo (first course), definitely not topped by meatballs in sauce.

Where does world-famous “spaghetti and meatballs” come from, then? Italian immigrants in America in the late 1800s had to adapt to using the ingredients they could find and afford there. This created a fusion of local ingredients with traditional Italian recipes.

Spaghetti with meatballs was actually invented by poor southern Italian immigrants in New York or New Jersey. When meat was served, the portions were too small to sit alone on the plate. But as a topping for pasta and red sauce, polpette made the platter a celebration.

The same goes with “Fettuccini Alfredo”, “Marinara sauce”, “Chicken Parmigiana”, “Macaroni and Cheese” and “Pepperoni Pizza”. Don’t order them in Italy, because they DON’T EXIST!

Note that pepperoni, with double p, is an Italian-American creation, birthed in the States. It doesn’t even mean the same thing in Italy. In Italian, peperoni, with one p, is the plural for peperone, which means pepper. Don’t order a pepperoni pizza, then, unless you really want a pizza with green or red pendulous vegetables on it. If you want hot salami on your pizza, order a pizza alla diavola, with salame piccante.

And don’t go looking for garlic bread. It doesn’t exist here. I don’t know where this misconception comes from, but garlic bread is not an Italian thing. The closest thing you can get is a bruschetta, an appetizer consisting of grilled bread rubbed with garlic and topped with tomato, fresh basil, salt and extra virgin olive oil.

The bidet, a shiny porcelain piece of plumbing, is regarded by most foreign visitors with an air of suspicion. Usually about 15 inches high, it resembles a smaller, squatter sink.

It can be used to wash feet or shave legs, but the general consensus is that it is mainly used for cleaning the nether regions of the body after using the toilet. I will spare you any graphic details.

The bidet is a regular fixture in Italian hotels and households. 99.9% of Italian households have it.

You are not expected to tip restaurants in Italy. We have just pulled the rug out from under your feet, haven’t we? Really. There’s no need to tip for simple things like an espresso at the bar, taxi rides or having dinner in a restaurant.

Particularly for Americans, the lack of a tipping culture can be rather confusing, but knowing Italy’s expectations when it comes to tipping can help you avoid weird looks and awkward situations.

While standard in U.S. restaurants, tips of 20% are just unheard of in Italy. Leaving a tip is not necessary here, since you already pay for service in the so-called coperto (service charge), ranging from 1 to 3 euros per person. You don’t need to leave anything more.

If you want to show your appreciation for a good value meal, simply say “I miei complimenti allo chef” (give my compliments to the chef).

What defines Italians the most, according to most people, is the way they talk with hand gestures. Italians gesture a lot while talking, even when they are on the phone and the other person can’t see them. Italian hands are rarely still.

Hand gestures are to Italian conversation what punctuation is to writing. It is estimated that over 200 hand gestures exist in the land of Sophia Loren and Luciano Pavarotti.

Apparently, the habit of using hand gestures dates back to when the Italian peninsula was split, and many different local languages and dialects were spoken. During that time, Italians used gestures to communicate, and it became a tradition that still exists.

Italians take so much time and care to prepare delicious pastas, meats and seasonal vegetables for lunch and dinner, but a typical Italian breakfast consists of a small cup of highly-concentrated coffee or cappuccino, a sweet pastry or biscuit and occasionally orange juice. That’s it. Don’t expect a hearty breakfast in Italy.

Italians don’t eat eggs, bacon, sliced cucumbers, ham, Emmental cheese and avocado toasts for breakfast. You will never in a million years see an Italian scrambling up some eggs for breakfast, even on weekends and lazy days.

Italians have a special way of queuing. At post offices, bus stops, bakeries or McDonald’s, you are more likely to come across a mob than an orderly line. This is absolutely normal in Italy. I know, adjusting to the Italian attitude can be alarming for Scandinavians and Brits, coming from a culture where the queue is sacred.

Furthermore, it seems that line cutting is fairly common, especially in southern Italy. Frowned upon by tourists and Italians alike, that of not respecting the line is a bad habit most southern Italians still have. They nonchalantly wiggle their way to the front, and stand with the attitude as if that is their rightful spot in the queue.

That’s why banks, post offices and even fresh food stalls at local markets have ticket machines now. You have to take a number, and then you wait for it to be called on the electronic display. Fab!

Except in major metropolitan areas like Milan and Rome, almost everything shuts on Sundays and sometimes Mondays too. Then there are the super long lunch breaks to contend with.

Especially in rural areas, it is very likely that shops, pharmacies and local food stores will be closed between 12:30 pm and 3:00 pm.

Italians prefer closing an entire business during these hours rather than stagger the employees’ lunch times so they can keep their doors open. They go home or to a nearby restaurant, have lunch, unwind and rest a little before going back to work. Postpone your shopping till after 3:30 pm, then.

Don’t expect to have dinner early in Italy. Any time before 8:00 pm is not an acceptable dinner time in the Bel Paese. Italians usually have dinner around 8:00 pm, but it is not uncommon to start the evening meal as late as 10:30 pm. In the North, meal times may be an hour earlier, while in the far South you may have dinner even later.

Restaurants, trattorias and pizzerias close between lunch and dinner, and you will find that most of them don’t even open their doors until 7:30 pm.

With their Mediterranean diet, Italians are one of the healthiest cultures on the planet, but yet it seems like most people smoke, and start smoking at a very young age.

Almost a quarter of the population smokes, and 2 in 5 Italian teens between the ages of 14 and 17 are habitual smokers. The number of confirmed nicotine addicts, who are getting through more than one packet a day, is on the rise.

Remember that smoking has been banned in public places in Italy, including restaurants, cafes, discos and offices, since 2005.

Have you encountered any other aspects of the Italian culture that leave you baffled? Let us know in the comments.