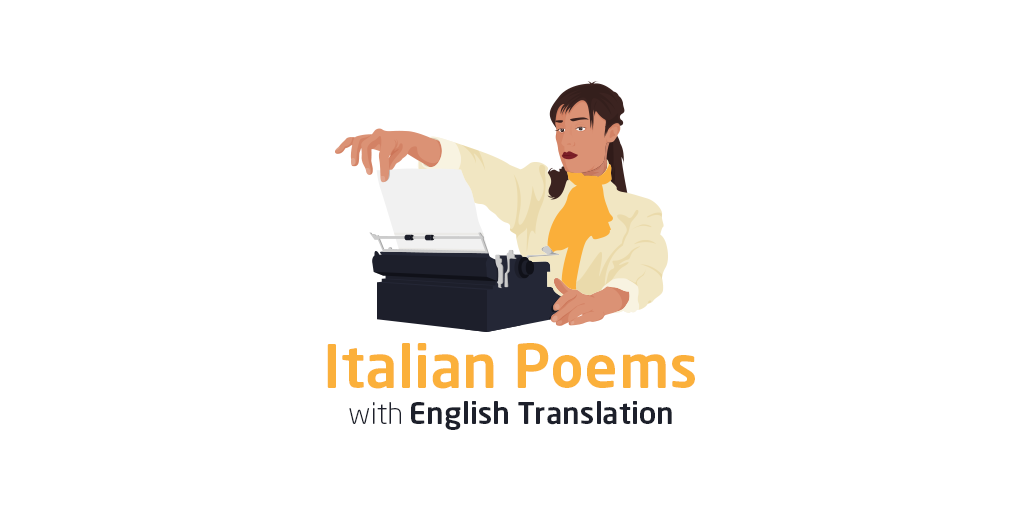 Poetry in other languages such as Italian can be intimidating. Where do you even start? If you want to dip your toes into Italian poetry and sample the works of great Italian poets, look no further. Here in this article, we’ve listed down six short Italian poems written by influential Italian poets. We’ve even included their English translations!

These Italian poems are a perfect start to enjoying Italian poetry. So without further ado, let’s see the poems.

The first poem on this list is by Ugo Foscolo, or originally, Niccolò Foscolo whose works are ranked among the Italian literary greats.

Ugo Foscolo is not only a poet and novelist, he is also a revolutionary and this reflects on his masterpieces. Though he is best known for his long poem Dei Sepolcri, we’re featuring here a lesser known though still an important poem, Alla Sera.

Perhaps because you are the image of that fatal quiet

so dear to me, you have come,

and the gentle west wind are your escort,

and when from snowy restless heights

you send shadows and darkness into the world,

the secret ways of my heart.

You make my thoughts wander forms

that vanish into eternal nothing; meanwhile

this cursed time flees, and with it, the throng

of cares with which it me destroys;

and while I gaze on your peace, that warlike spirit

sleeps, that yet within me roars.

Another famous Italian writer, Giovanni Pascoli was considered the greatest poet in the beginning of the twentieth century. The poem featured here is taken from his first literary work "Myricae”, a volume of short poetry inspired by nature and his own inner turmoil.

And sky and earth showed what they were like:

the earth panting, livid, in a jolt;

white white in the silent tumult

a house appeared disappeared in the blink of an eye;

opened and closed itself, in the pitch-black night.

If you want to listen to an interpretation of Il Lampo, check out this video.

Another important name not just in Italian literature, Giacomo Leopardi was considered to be among the best writers of the 19th century. His genius shines through in his poetry, as do his hopes and frustrations. His poems are often admired for its musicality and intensity. Here’s one example.

Always to me beloved was this lonely hillside

And the hedgerow creeping over and always hiding

The distances, the horizon's furthest reaches.

But as I sit and gaze, there is an endless

Space still beyond, there is a more than mortal

Silence spread out to the last depth of peace,

Which in my thought I shape until my heart

Scarcely can hide a fear. And as the wind

Comes through the copses sighing to my ears,

The infinite silence and the passing voice

I must compare: remembering the seasons,

Quiet in dead eternity, and the present,

Living and sounding still. And into this

Immensity my thought sinks ever drowning,

And it is sweet to shipwreck in such a sea.

The next poem on our list is by modernist Italian poet, essayist, and journalist Giuseppe Ungaretti who debuted his career in poetry while he was fighting in the trenches during World War 1. Here is his very short poem, Soldati.

You can listen to a reading of this poem below.

Gabriele D’Annunzio was not only an Italian poet (and a playwright and journalist), he was also a soldier and later on a political leader.

Though he lived a life that was filled with scandals and some controversy, he remained one of the most striking personalities in Italy during his time and his poems continue to become among the modern masterpieces of Italian poetry.

Rimani! Riposati accanto a me.

Stay! Rest beside me.

I will watch you. I will protect you.

You'll regret anything but coming to me, freely, proudly.

I love you. I do not have any thought that is not yours;

I have no desire in the blood that is not for you.

You know. I do not see in my life another companion, I see no other joy

Rest. Do not be afraid of anything.

Sleep tonight on my heart…

You can listen to this poem here:

Our final poem for this article is by no less than the official National Poet of Modern Italy. Giosuè Carducci won the Nobel Prize for Literature in 1906 and he is considered one of the most influential literary figures in his time.

This poem, San Martino, is from his poetry collection called Rime Nuove (New Lyrics) published in 1887. It contains some of his greatest works.

The fog to the steep hills

amid the rain ascends,

and under the mistral

the sea screams and whitens:

but through the alleys of the village

from the bubbling vats

goes the sour smell of wine

the souls to rejoice.

on the door to gaze

among the reddish clouds

in the twilight migrating.

Listen to the poem San Martin in this video.

There you have it, six short Italian poems. We hope you enjoyed your foray into Italian poetry. Which one on this list do you like best? Or do you have a favorite Italian poem that we failed to mention? Do share it with us in the comments!